A few years ago, inspired by elfprince13's cool MOCs, I set out to create a LEGO model of my long-designed, long-envisioned private traincar CPRR1. I made a bit of progress virtually designing the car in Stud.io, mostly using standard stud-up building techniques. Somewhere near the beginning of the COVID-19 quarantine, I decided I wanted to pick the project up again, but seeing quite a bit lacking in my LEGO design skills, I decided to try replicating something real (and annoyingly complex) first: a single-level Amfleet coach. These corrugated passenger cars, built in the 1970s and 80s by the Budd Company, were meant to evoke the shape of an airplane (thankfully without the legroom to match). They're 85 feet long, 10.5 feet wide, and 12'8" from railhead to rooftop.

I elected to reproduce an Amfleet passenger coach in the so-called "L Gauge" (1:48 ), where 10 feet is just about 8 studs wide or 20 plates high. This gives me a car that is 8 studs wide, a body that's a bit over 5 bricks tall (plus trucks), and a whopping 68 studs long. I started by designing the sides of the car: to make my life more interesting, I decided to accurately reproduce the slanted/rounded sides of the car, not just the roof, and include the corrugated texture. Although impressive, previous smooth-sided reproductions and one-off side sections seemed simultaneously too inaccurate and too impractical for a real car. I started by canting out the corrugated section under the windows, and adding inverted window+stripe sections above that: 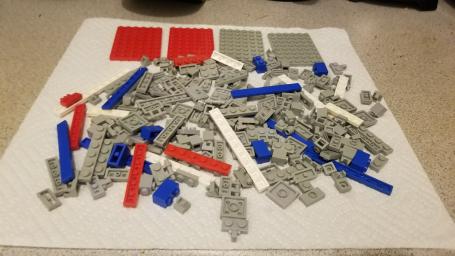 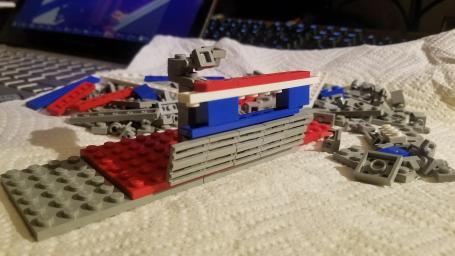 Basically satisfied with that, I set out on a maddening voyage to get the roof right, using a combination of building with physical bricks and building with infinite virtual bricks in Stud.io. I tried a stud-up core onto which I built modified 1x2 plates with handles holding 1x1 tiles with clips extending through Technic half-studs to the corrugated tiles. I tested out versions where I built an interlocked, self-supporting roof surface out of locking hinged bricks instead of relying on a core for support. I got creative, trying to throw other types of hinged bricks into the mix. Throughout, I continued to think that the 1x1 tiles with clips plus Technic half-studs, clipped onto some sort of handle, were the key, as they gave me the flexibility and compactness I needed, albeit with a result that's quite fragile. 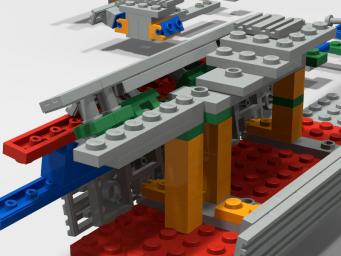 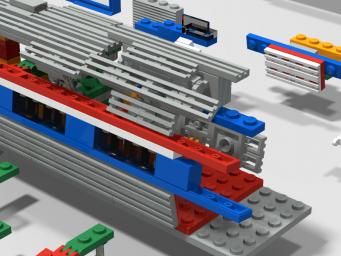 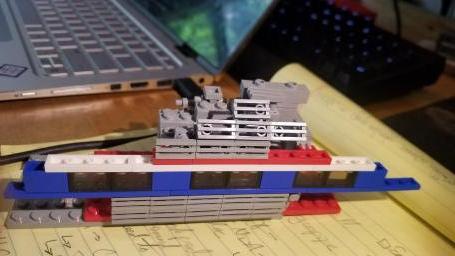 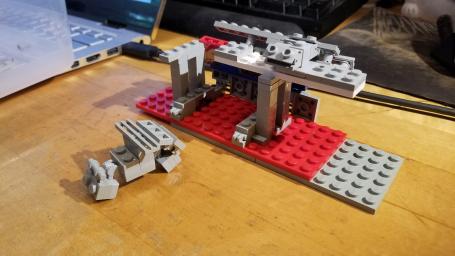 My breakthrough came when I discovered the 26047 1x1 plate with handle, a 1x1 version of the 1x2 plate with handle I had been relying on, which gave me even more flexibility to interleave connections to the layers of the roof. My first non-tileable version was an 8-segment, 7-stud-wide, 5-plate-tall recreation that while relying on a central core, fits that core entirely within the shape of the roof itself, leaving space underneath for at least a partial interior in between support columns. After a bit of additional iteration, I figured out how to turn that into a tileable 4-stud-long section that I could copy down the length of my Amfleet car. 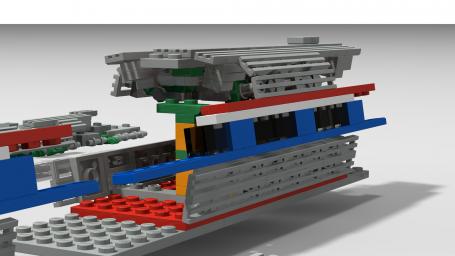 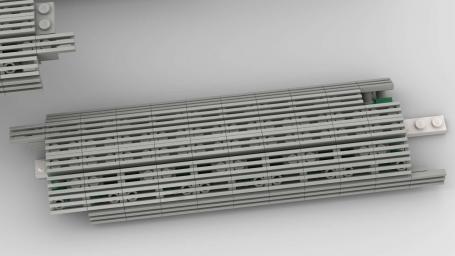 Satisfied that I was on the right track (no pun intended), I made one last rendering of my virtual workspace full of different roof experiments, Amfleet body sections, SNOT experiments, and copy-paste-able hinge prefabs before clearing them away and focusing on getting my mostly successful roof in place. 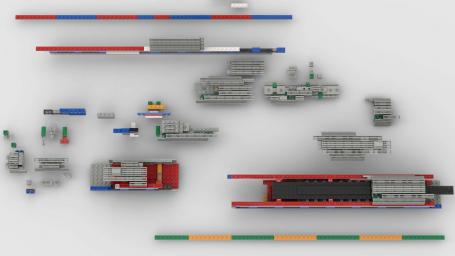 I now have myself a "perfectly" tileable roof, in that no part of it extends into the next section. I've started adding little slightly-too-small 2-stud-wide double seats in the interior, a navy carpet of tiles, and most recently, started to build the endcap/vestibule, which is going to provide another serious challenge as I attempt to fit "doors" into the end of the car while simultaneously matching the angles on the sides of the car to those end walls. 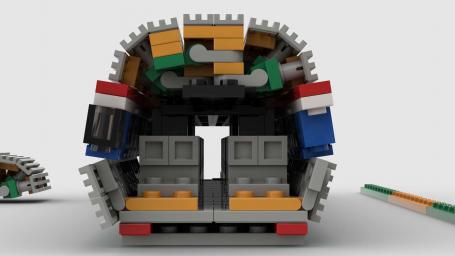 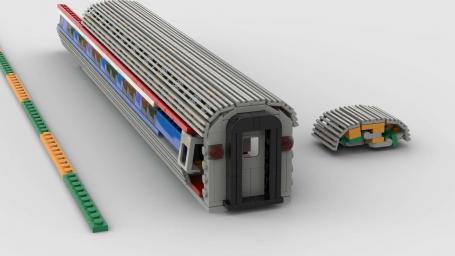 Any feedback or suggestions would be greatly appreciate, and I look forward to keeping you up-to-date on this project as it continues. As with a surprising number of my projects, it required me to recurse into another of my projects: I spent all day yesterday improving and fixing bitrot in Cemetech's Photos application, allowing me to create the album where all of the above photos are stored to share with you all. And if you have your own LEGO MOCs, trains or otherwise, I encourage you to post them in this same subforum!

This is really cool! Nice work! Love the "corrugated texture".

I still have Lego train stuff somewhere, with electrified rails and motorized locomotive unit and speed controller. I think the new trains all use lame batteries instead so you can't just leaving them running continuously and I don't think they have a speed controller either. The locomotive unit also had some electrified studs so you could have lights on it. Wouldn't it be great to have a Lego train running around your office?
↑
Quote

Michael2_3B wrote:
This is really cool! Nice work! Love the "corrugated texture".
Thanks! If I wasn't trying to replicate that, I could probably have saved myself a lot of effort, but I try not to do things half-heartedly.

DrDnar wrote:
I still have Lego train stuff somewhere, with electrified rails and motorized locomotive unit and speed controller. I think the new trains all use lame batteries instead so you can't just leaving them running continuously and I don't think they have a speed controller either. The locomotive unit also had some electrified studs so you could have lights on it.
I had LEGO 9V trains as a child, the red freight set 4563, and I loved that it was just like a model train (i.e., electrified tracks, real controller, etc.).

Quote:
Wouldn't it be great to have a Lego train running around your office?
This almost seems necessary for Geopipe's future permanent office.

There are 550 users online: 3 members and 547 guests.
Members: Adurna, Nytician.