The new ships look cool - Have you thought about a ball shaped ship as well? I think it would look cool rotating and flying around + might require more skill to master due to not easily being able to see the direction.
"My world is Black & White. But if I blink fast enough, I see it in Grayscale."

Progress on the menu, which is nearing completion (just need to do the ship unlock system now, and make the reset statistics button actually do something): 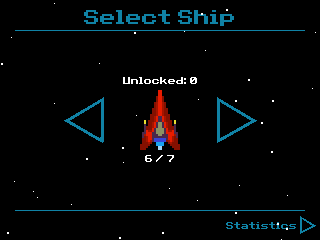 List of things I'd added:
[added] the about screen, which can scroll, something that I haven't done before
[added] two new ships, as announced yesterday
[added] a line that appears as you beat your high score
[improved] the UI

My trusty iPhone SE has been bricked for good as of earlier today, so I'll have a lot more time to work on this now that I'm wasting less time using the phone. I have some more updates that I hope to reveal within the next few days, so stay tuned. I may upload a preview or short screenshot before then to give an idea of the new features that will be added as well (assuming I don't run into any problems).

That's some nice rotation stuff on the ship! Do you plan to add rotating asteroids? Or maybe even have the screen rotate as it gets more difficult?
Scratch got updated. It's ok...
↑
Quote

SomeCoolGuy wrote:
That's some nice rotation stuff on the ship! Do you plan to add rotating asteroids? Or maybe even have the screen rotate as it gets more difficult?
I know I already replied to you on IRC, but for those reading the forum, the short answer is no. It would take away too much performance to rotate all of the sprites, and I think that I want to keep the program's current capability of maintaining a pretty constant 30 FPS. In other news, I have made a lot of progress on a new update for HailStorm, and I am looking forward to sharing the details with you all within the next few days...

Version 0.2
I have made a lot of progress since I posted last. Here are the most important/noteworthy things. The full changelog will be at the bottom.

Ship unlock system
Instead of having all of the ships unlocked at first playing of the game, you now will have to complete achievements to unlock the different ships in the game. These achievements are varied, ranging from shooting down 100 asteroids, scoring 10000 points, to owning all of my other programs (got to get those downloads). With this, I added three new spaceships to unlock as well.

Improved asteroids
Instead of taking off health for each loop that your ship overlapped with an asteroid, the asteroids now break when you shoot or run into them, displaying a cool animation in the process. They take off a certain amount of health that is proportional to their size.

Screenshot
You can check out the changelog for the full details, or you could just look at this screenshot: 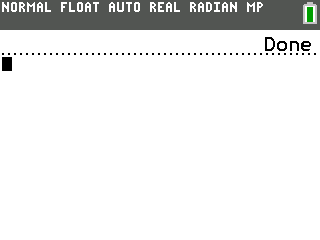 Update 0.2 changelog (probably the final version before launch):
[added] 3 three new spaceships
[added] the ship unlock system: with this system, you will unlock ships for completing certain tasks, such as destroying 100 asteroids, scoring 10000 points in a single run, or owning all of my programs (got to get those downloads)
[added] the ability to actually reset your statistics, as the option did nothing before
[added] a logo for the main screen
[added] powerups: there are three different types of powerups that will be occasionally dropped if you shoot down asteroids, and they will either recharge your health by a certain amount, reset your bullet timer, or reset your shield timer
[added] the functionality to change menu options in the settings menu by hitting 2nd or enter (if it's on, it will turn to off, and vice versa)
[added] the ability to select ships that you've unlocked and play the game with them
[improved] general UI stuff, especially in the menu
[improved] fixed up the death screen, which will show you your statistics for the run, any new ships you unlocked, and whether or not you got a high score
[improved] added a logo for the quit option on the main menu
[improved] instead of taking off health for each loop that you are colliding with an asteroid, they will now break when you hit them, displaying a cool animation and taking off an amount of health proportional to its size
[fixed] the massive bug that corrupted the whole memory of the calculator

Conclusion
That's all for this update. I hope to have the full release, which will contain a few new features, such as the pause menu and some quick UI fixes, out within the next week for you all to play, so we'll see how that goes. As always, feel free to post any feedback or suggestions that you have as well.

Thank you all for your continued support!

Apparently, I'm not good enough at this game to unlock the final ship (which is unlocked at 10000 points)... 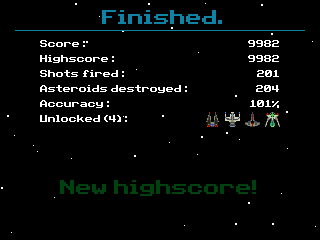 Anyway, I've made a few more updates and now just have to fix a few of the ships with wrong colors as well as add a couple more buttons, and this will be done and ready for the upload.

Update 1.0.0 changelog:
[added] an animation at the beginning that gives some visual indication that the program is loading, instead of just displaying a white screen (it needs to scale the sprites before the program starts)
[added] a button to return to the main menu in the menu
[added] the ability to pause the game
[added] buttons to return to the main menu, play again, or quit the game in the death screen
[improved] the UI in the main screen
[improved] fixed the description
[improved] fixed some issues with certain ships having the wrong colors
[improved] the UI on the ship selection screen
[improved] resized and moved the logo on the main menu to look better
[improved] on the ship selection screen, it now says yes or no to whether it is unlocked rather than 1 or 0 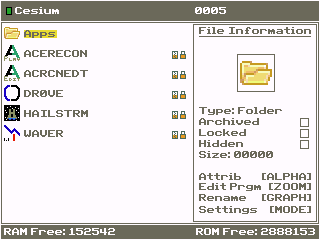 Please post any feedback or suggestions you may have in this forum, or leave a review once the program is accepted on the downloads page. Thanks to everyone who helped out with HailStorm CE as well. This is the program that I have had the most fun making out of any of my programs so far.

Oh wow it's out already?

Dang, I'm really impressed. This is by far the most polished CE game I've seen in a long time, especially for a first release! The performance is great even with all the asteroids and stars, the GUI is nice, the star background is neat, the high score bar is really cool, and the ship rotation is very smooth! This is the kind of feel I wanted JPL to have, if you want I can maybe work on getting my ship editor working for your program when I get the chanceIf you don't want, well that's too bad, I'm trying it anyways : P. It should already be almost compatible since it just spits out a singe, square sprite when you compile the ship. I'll just need to make sure it outputs the right size for your game! Am I a better player than you already?

I've only encountered a few small bugs, first, the bullet cool down doesn't seem to work well, I can still fire even though it shows a red bar, but only if I'm turning. Second, if you haven't played at all yet and you go to the statistics page, it'll show your average accuracy as -1% rather than 0%.

Awesome work man! Glad to see this get released so quickly

Thank you for your feedback, everyone!
TheLastMillenial- The ship editor is a cool idea, I will give some more thought into that later and hopefully get back to you on it. The bullet cool down is working as intended, it allows you to fire five times before it recharges, but only if you turn first (like in Tanks for the Wii). Ill add some more indication that thats what is going on in the UI for the next release. The -1% is a known bug that will be fixed in the next release. And my high score is 17547, so I guess you are a better player for the time being.

Contest
And I have a challenge for everyone- post your high score here. The person with the highest score will get a new ship added to the game by request, and maybe be able to choose the achievement that will unlock it as well. The contest will last until the release of 1.1.0, which Ill tentatively place at a week from now. Current leaderboard:
1. TheLastMillenial- 18789
2. epsilon5 (me)- 17547

First of all, wow, this is a really fun and polished game! I had a lot of fun playing it, and the UI looks very neat and creative.

That being said, there is one bug that I noticed while playing- if you hold any button while you are moving left or right, the movement doesnt work exactly as expected. Im not sure how to describe it, but you can sort of control the speed of the ship more easily, which can actually be a hinderance if youre trying to move precisely but accidentally are holding another button. I would assume this bug would be easy to fix.

Other than that, though, I definitely agree with TLM that this is one of the best games to come out on the CE in a long time, congrats on the release This is beautiful! I can't stop playing it, it's really well-made for a first release!
The only bugs I've seen so far are that asteroids sometimes aren't destroyed (even when given a direct hit) and the shield power-up cancels an existing shield on refilling the shield cooldown. It can be re-activated, but it sometimes cuts out when surround by asteroids and I have had my health tanked by that. A suggestion I've thought of now would be a way to pause and quit, but keep progress for the current game. You also might need to make the pause menu completely black-out the screen so that one can't just pause repeatedly in order to stop the game and look, then make a small adjustment, and repeat until max score is hit.

Also, nice job LastMillennial, I see I have a worthy adversary

I tried this out earlier today and it looks and feels amazing! Overall the game is very fun to play and very polished (basically the opposite of most of my games).

Could you push the latest version to GitHub, please? I'm both curious as to how the program works and want to try something (don't worry, it's not related to cheating at the high score

). The current version that's on the GitHub currently isn't working for me - it either causes a RAM reset when built from source or just exits immediately.
My projects: Wordle | CEleste | Unit Tool | Tanks! | Terminal CE
If you found this post helpful, consider giving me a karma by typing commandz++ in the SAX chat.
↑
Quote

Bugs
During play, I encountered a number of bugs. Most of these are graphical issues but they detracted from the game play.

Suggestions
I have a number of suggestions here.