MateoConLechuga wrote:
It's really hard to help you with code when it isn't easily compilable nor have any of the other suggestions been even considered.


What suggestions have I missed? I added rising edge detection, the ability to press 2nd instead of enter in the menus, improved AI marksmanship and speed, general optimization, improved shop UI, and am working on partial redraw, all by community request. Im trying my best. If there is anything I missed though, please let me know.

Sorry if this seems rude, it isnt meant to be.

I think he was referring to changes to the code. In my opinion he's being a bit unreasonable there, but with most of his other suggestions he has a point, and if you were to implement them you would be forced to rewrite the RenderBullets function. He probably doesn't want to help you write this function now because he knows it would make it more difficult for you to take his other suggestions. Additionally, some of his suggestions would make the code more readable, which makes it less tedious for other people to help with the project.

Please let me know if I missed any.

The issue here is that I am quickly losing motivation for this project, as Ive been working on it continuously for about three months. I just want to get it to a playable state and released at this point, then move on to my next project. Any major code restructures will mean a lot more work that will make me undo a lot of the things that I have done over these months. So, I am just trying to finish partial redraw and fix bugs now. I will be more than happy to implement all of these suggestions into my future projects though.

Pretty much just need to finish the help page in the level editor and make a readme, and Ace Recon should be ready for release. I have been at work optimizing the code and implementing suggestions, as well as cleaning up the UI. Probably the most notable thing in this update is the different guard types, which are:
-Chaser- will patrol the game area, and chase the player if possible in an attempt to make an arrest
-Patroller- will patrol the game area, and shoot the player if possible (the guards that have been in the game since the beginning
-Sniper- stationary guards that look around, and will shoot the player if possible
All of these guard types can be changed in the included level editor, which I can include a screenshot of as well if anyone is interested. 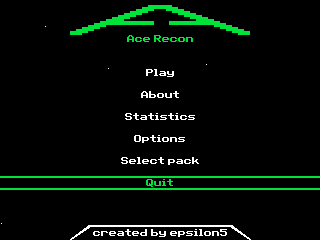 Sort of a weird feeling to be killed by my own AI.

Editor:
[added]: help pages
[improved]: the current tile view now is vertically centered and has a larger outline for visibility

Once it is accepted, please let me know what you think or leave a review. Also, thanks to everyone who helped me out on this project.

I hadn't seen the new guard sprites - and they look great!

tr1p1ea wrote:
I hadn't seen the new guard sprites - and they look great!


Thanks. That did take some work to get functioning, as it messed up all the hit boxes for a while.

Also, Ace Recon is now available in the archives, and can be downloaded here: https://www.cemetech.net/programs/84pce/asm/games/AceReconCE1.0.0.zip. Please let me know if you have any feature requests or feedback; I will be happy to try to implement anything within the range of my current abilities.

Congrats on submitting to the archives! I look forward to playing now, and possibly future updates. Good job, and good luck!

Argus wrote:
Congrats on submitting to the archives! I look forward to playing now, and possibly future updates. Good job, and good luck!


Thanks! If you still want to make a map pack, the editor is worth checking out as well. I made the whole ACRCNDEF map pack with it on-calc. I spent a while on it, so I hope you or others can get some use out of it.

I have a few quick fixes on the way for update 1.0.1. Here is what is coming:

Main program:
-ability to press 2nd instead of enter on the options screen
-fix a typo in the about screen (apparently the sniper guards look around around)
-improved win screen

Level editor:
-fix the ability to press 2nd in the menus

I also have a new project to be announced soon, so stay tuned for that. I will say that I have pretty good progress on it so far, and that it will be a project slightly larger than Waver CE (and with much better graphics).

Ace Recon CE 1.0.2 will be uploaded to the archives in a few minutes. Thank you all for your support on this project, in particular Adriweb and MateoConLechuga for helping me out with adding an icon and description to the game/fixing bugs over the last few days. Here are the icons in Cesium: 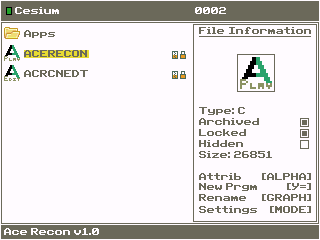 And 1.0.1 is available in the archives as of earlier today, adding some much needed bug fixes to the game. You can check out the full details in the readme.

Ace Recon has been downloaded 200 times already and is shaping up to become my most popular program in a few months' time. Thanks to everyone for trying out the game, and to the one person who gave me a review. Looking forward to releasing more programs in the future (will announce more information on Hailstorm CE soon, I have made a lot of progress since my last update).