So, recently I've been working on a Scratch clone for the CE. Right now I only have basic block rendering done: 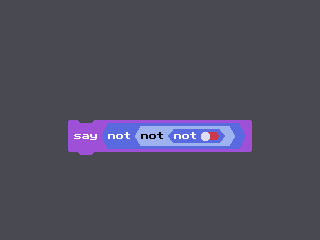 yes, I am aware that that's slightly off center. I'll fix that as soon as I finish this post
I'm actually basing the language itself off UC Berkeley's Snap! programming language, which supports all of Scratch's features but also includes advanced functionality such as first class lists.
Right now I have the block format worked out, and can render blocks, predicates (Boolean blocks), block text, string literals, and Boolean literals. I still need to implement rendering for hat ("on") blocks, reporters (round blocks), custom block definitions, Snap's rings, C blocks, argument lists, float literals, and variables.
As for speed, this example with 15 levels of nesting runs at 20FPS:

Of course, none of these blocks actually do anything yet - I still need to implement actual functionality, as well as the editor.
There are 10 types of people on this forum: Those that agree that, regardless of base, this statement is incorrect.
This post is not brought to you by Adidas.

Real nice! I always wanted a scratch clone on my CE
↑
Quote

As much as I despise Scratch, this seems like a very interesting project as always, commandblockguy! Snap is a very cool derivative, I might just have to play around with it myself.

It'll be interesting to see how much of the language you'll be able to implement. I'm also particularly interested in seeing how you choose to implement your control scheme for the UI.

Good luck!
Try out Village, a cool Esolang!
Some, but not all, things and people care about not who you are, but what you can do. they may seem odd, but are good judges of your skill and ability.