I guess this will be where I post information about DR1VE, my upcoming TI 84 Plus CE racing game. More to come... but in the time being, could I have some suggestions for the game? And if you want a very early preview of the quick race system and driving physics, check out DR0VE, which should be accepted to the archives soon.

EDIT- For the poll, if you're excited about something else, please post it here.

Higher res cars using a custom palette. More types of races would be nice too.

What new race types are you envisioning?

Would someone with a little free time mind reviewing DR0VE ver.1.0.1? Its in the archives right now, under TI 84 Plus CE Assembly games. Thanks in advance.


EDIT- You can either post your review here or on the archives page.

Wow. The poll right now is all even. Every option has 1 vote, and the poll needs a tie breaker. I voted "career mode" because I like games that build off of previous progress.
Life has no meaning. Each of us has meaning and we bring it to life. It is a waste to be asking the question when you are the answer.
Check out my youtube channel! https://www.youtube.com/channel/UCyLLc9cff7zmkc0j5rC6-7g
↑
Quote

Alright for the time being, it looks like customization and career mode are going to be the highest priority features (judging by the poll). I've got some interesting customization things I'd like to try out, so we'll see how that goes. More updates soon.

I may try to learn assembly to write this, since it will probably work better than ICE for my purposes. What do you think?

I kinda put together a response on dIRCjax:

Quote:
6:50:09 AM [#] [disjax] [_iPhoenix_] Any time someone says "I'm going to try to learn assembly to do this, it better fits my needs" I know the end of the project is in sight because assembly is a whole lot more complicated than you might think- not so be discouraging, I totally think you could do it
6:51:29 AM [#] [disjax] [_iPhoenix_] It might be better to work in an intermediate like C. Just my $.02, I don't want to be discouraging since I really like that project :)

_iPhoenix_ wrote:
I kinda put together a response on dIRCjax:

Quote:
6:50:09 AM [#] [disjax] [_iPhoenix_] Any time someone says "I'm going to try to learn assembly to do this, it better fits my needs" I know the end of the project is in sight because assembly is a whole lot more complicated than you might think- not so be discouraging, I totally think you could do it
6:51:29 AM [#] [disjax] [_iPhoenix_] It might be better to work in an intermediate like C. Just my $.02, I don't want to be discouraging since I really like that project :)

Well, alright. Thanks for your input. I guess Ill code it in ICE or maybe make the jump to C, then redo it in assembly later if I feel like it. How does this sound?

I'd recommend writing the project in C. In my opinion, especially for beginners, assembly works well for small scale things but quickly becomes unmanageable as the size of the thing it is used for grows. In my CC22 entry, I wrote most of the program in C, and had a few small self-contained routines that were written in assembly. If I tried to write any of the actual game logic in assembly I would have gone mad. ICE works well for quick prototypes and simple games, and is basically the only option on-calc, but becomes tedious to use if you are trying to do something it doesn't "give" to you (like change brightness or read OS stuff or seeded RNG), and requires you to rewrite stuff you would normally get from a library by hand. C, like Mateo, is nice because it yells at you if you are doing something wrong and tells you (somewhat cryptically) how to fix it, rather than ignoring the issue and causing unseen bugs later that are incredibly difficult to debug. Unlike Mateo, C is easy to read and has cool features like structs that make things way easier for the programmer.
My projects: Wordle | CEleste | Unit Tool | Tanks! | Terminal CE
Join MyCalcs today!
↑
Quote

Okay. Ill probably start it in ICE, assuming I can find my calculator, which I left somewhere at school on Friday. This is because I do almost all of my programming on calc currently (to put this into perspective, the entire about section, statistics section, and most of the race section of DR0VE were done on calc during my free time at home/school). This will probably just be for prototypical stuff, as commandblockguy said. Then for polish, optimization, and speed, Ill program the rest in C on the family laptop.

And I suppose thats all. How does this sound?

EDIT- Right, a question. How big is the jump from ICE to C? They look pretty similar in my opinion.

EDIT- Right, a question. How big is the jump from ICE to C? They look pretty similar in my opinion.

Many of the commands are the same, since ICE uses the same C libs. However, the actual language is quite different, but it also has many great tutorials online that you could use.
↑
Quote

I wouldn't recommend doing large parts of your program in ICE and then converting to C later.
On a small scale, ICE code is convertible to C, since they use the same toolchain functions and have the same operators. However, if you convert large portions of ICE code to C you lose most of C's benefits. C allows you to structure your code in a way that allows you to add more code easily, using things like types and functions. Types help prevent errors that would be hard to catch, and functions allow you to write a routine once and then not have to repeat it later or do convoluted, hard to read GOTO magic. There are also arrays, which are much easier to use than ICE's lists, and structs, which make it easy to have a list of different objects that have attributes. Like, for example, you could have an array of car structs, with each car struct containing the name, speed, and sprite of each car. Then, you could do cars[0].speed to get the speed of a car, or cars[0].name to get its name. If you went from ICE to C, the code would still work, but you would have to rewrite it to use the C features that give C an advantage over ICE.
My projects: Wordle | CEleste | Unit Tool | Tanks! | Terminal CE
Join MyCalcs today!
↑
Quote

Gotta be the campaign!
"My world is Black & White. But if I blink fast enough, I see it in Grayscale." 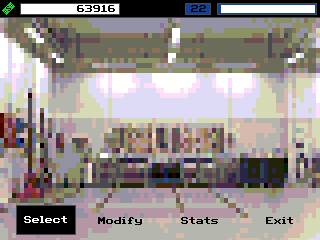 About that last screenshot:
-it looks like the previous garage screenshot for DR1VE, but the garage has been completely rewritten for optimization and visual appeal since then
-since the screenshot was taken, I took the background out, but I may put it back depending on what you guys think about it
-the text is automatically centered around different points on the screen when not selected, and automatically centered in the box when it is selected (which means that you can change the text to whatever you want, and it will always be perfectly centered), which adds to the visual appeal
-the box will turn blue when you select something, like the menus on DR0VE
-the amount of money, shown in the top tool bar, automatically moves to be right aligned in the designated box, and it will display MAX if you have more than $15,000,000 (the maximum amount of money you can have, since ICE only goes up to 16,777,215, if I remember correctly): this means that your money will not rollover to 0 after completing a race and winning a lot of money
-the EXP works alright, but you always need the same amount of EXP to level up, like in Rocket League

What do you guys think? Tell me in the comments down below. Focus on the general look of it and the fact that you need the same amount of EXP to level up each time you level up, please.

For the last screenshot:
1)Nice. I like how you are able to have that much patience and perseverance to rewrite the garage!
2)I think that the background was nice. I think the background made the program look cleaner.
3)I like how the text is always going to center. Good games have good-looking graphics, and the text-centering is a huge step toward your program looking even better and more professional.
4)The box turning blue sounds nice, as it adds more good graphic features to the program.
5)That is nice. And also, $15,000,000 dollars is a lot, so I think that getting there should be rare and difficult, but I like how you thought about that. Nice work.

6)Nice. Though I think that the game would be more fun (and challenging) if you needed more xp every time.

I think that this game is going really well. Really good job.

Life has no meaning. Each of us has meaning and we bring it to life. It is a waste to be asking the question when you are the answer.
Check out my youtube channel! https://www.youtube.com/channel/UCyLLc9cff7zmkc0j5rC6-7g
↑
Quote

Man, this looks great! I have a few thoughts/suggestions:

I love the garage background. Don't be afraid to use bytes to improve the look of screens your users will spend a lot of time on.

Instead of displaying MAX, just let the $15,000,000 number show up, maybe as a different color- users should get the idea, just include it as a note in your readme for the particularly clueless.

Since the background is kinda low-res, maybe look into spreading this style throughout the program. A custom font is a great way to do this, and it will really make your program look spiffy.

The black text on the blue level indicator is kinda hard to read, maybe look into a different color.

Additionally, maybe look into making the text for the current cash the same shade of green as the cash icon.

I think the selectors at the bottom would look cleaner if the black box used to select options was just slightly smaller in height. Currently, it looks as though it is about 3x the height of the text, maybe look into 2.5x or 2x.
Support the community by joining MyCalcs for free!
↑
Quote

Those things I posted before were prototypical things in ICE. Ive been working on learning C recently, and it looks promising, to say the least. I may need some advice/help however, so Ill post here for questions. Hopefully you more experienced programmers can answer them. Thanks in advance.

Ill leave this here too, in case you thought I was lying about writing stuff in C instead of ICE:

Quote:
the maximum amount of money you can have, since ICE only goes up to 16,777,215, if I remember correctly


As of now, there is nothing written in C, but some in ICE, mostly due to the fact that it is much easier for me edit on-calc than on a computer currently. Just wanted to tell you that now.

Ill keep reading up on C, and maybe will have more screenshots within a few weeks, if things go well. I hope you guys are patient.

Why doesn't this work? Thanks in advance for your help.