Good day, it's been a while.

Yes, I know this game already exists for a few months and that it's weird to create a new thread for an old game, but I still feel like any game in the archives should have a thread for reporting bugs or leaving suggestions and everything. Next to that, I also have a quick update...

Between school, other hobbies and social-obligatory vacations, I have found some time to work on a new version of SolitiCE, version 2.0.
The new version is rewritten in C, mostly since I felt like that way I could fit much more content in less bytes (the new version is currently about 10k, the older version 13k).

Version 2.0 will also have some additions:
- Scoring Systems (Standard, Vegas and Vegas Cumulative)
- Pictograms for Ace, Jack, Queen and King
- 6 Different Back Prints (instead of ugly plain colors)
- A Clock
- The reason everybody plays Solitaire: 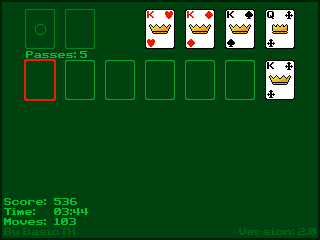 I will release it soon, the moment I'm sure it's good to go.

Haha yes that is the reason, the bouncing card victory

Looks fantastic, will happily wait for release.
"My world is Black & White. But if I blink fast enough, I see it in Grayscale."

Yes! The new sprites and the win animation are amazing! Do you plan to add any other animations later? I love where you're going with this, keep it up!

I really, really like the sprites for the face cards.

TheLastMillennial wrote:
Do you plan to add any other animations later?

What kind of animations were you thinking of? I don't feel like adding unnecessary animations that might slow down the gameplay (which would be very annoying).

Please report any bugs/mistakes if existent and found.