A few days ago, we heard that a TI-Nspire CX CAS II was rumored to be released this year, and we now have confirmation. Our friends at TI-Planet linked their discussion; for clean-room principles, we've done our research here solely from primary sources. Specifically, we found that TI-Education France discusses the TI-Nspire CX II and TI-Nspire CX CAS II, and thanks to the wonder of parallel URLs, an unlinked English page about the TI-Nspire CX/CX CAS II also exists. We spot a few key features that appear to be promoted with this new calculator:
Notably, since most of the above appear to be improvements in the calculators' operating system, and the calculator's memory has not been expanded, it is not clear whether these features will also be available as an OS upgrade for the older TI-Nspire CX models.

Have you discovered anything else interesting about the new TI-Nspire CX II and TI-Nspire CX CAS II? Do you think we'll get to play with it at T^3 this year? Will we manage to get our hands on the nice red European -T version? Will the TI-84 Plus CE be refreshed as well? Let us know your thoughts in the attached thread. 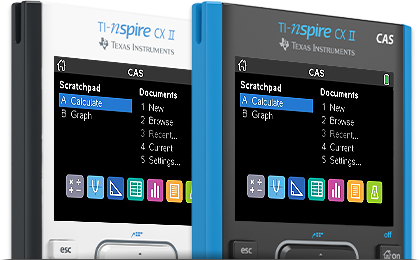 Now give it a touch screen, a 512mhz cpu, and improve the track-pad and I might buy it!

So we don't officially know the new type of CPU (or if they're keeping the old one) nor the clock speed yet?

) I agree with you that the document interface isn't that great, especially if you're not a calculator nerd and you're new to the calculator.
I'm very excited TI is adding a version of TI BASIC (Nspire BASIC?) into the Nspire! I never got to program one of these, but my friend said programming it with Lua was pretty unintuitive. Perhaps it could increase Nspire programming here on Cemetech!

I'll bet TI will show off their shiny new calculator at T^3, I don't see why they wouldn't. I also don't see why getting a Nspire CX II -T (wow that's a mouthful) would be harder than getting any other new calculator from Europe. Are there any complications you foresee?
Personally, I highly doubt the TI 84 Plus CE will get a refresh anytime soon. Knowing TI's track record, the CE still has several years before a new calculator/ a refresh is released. (Wow, I just realized the CE is about to become 4 years old this spring)

One last thing, before the Nspire II is released, I think Cemetech needs to finally finish adding a full specs/ details list of the Nspire CX CAS page.

So All I need to do is repaint my NSpire CX CAS. add in a fancy-looking II on it, and it should be able to pass off as the newer one? I hope that the OS will still be compatible, then I could make my Nuclear Reactor Simulator in NSpire BASIC... As well as the fact that I find the draw commands pretty useful.
We should all petition/email TI to make it happen if it doesn't. Offer 1 karma to whomever emails TI and gets a response

I sent TI an email asking about the release date, and they told me it would be released in Spring 2019.

They also said "the TI-Nspire CX II CAS will have the same features that make the TI-Nspire CX CAS Graphing Calculator ideal for math and science courses", but they did not clarify if the older calculators would get the new OS.

I just sent an email asking them if the OS would be compatible. I also asked them for exact CPU performance numbers and if the Nspire II would be up to par with the HP Prime G2. (I'll bet it's not

andressevilla wrote:
I sent TI an email asking about the release date, and they told me it would be released in Spring 2019.

It's supposed to be March for teachers, so general availability should follow quite quickly... I guess we'll monitor Amazon and such

Also we can ask for more details at T3 since that will be a few weeks before.
TI-Planet.org co-founder / co-admin
↑
Quote

There was already a basic-like language available on the nspires, I believe they just added some commands.

Looks amazing! I particularly like the stripes on the side as well as the new, modern-looking icons. The interactive graphs will most likely be really useful, too. I wonder how much it costs, though.

Speaking of new technology, while I was searching, I found this python adapter for the TI 83 Premium CE and was wondering if anyone else had seen it. It looks like it will add a whole new world of functionality to these calculators!
Why do the French get all the cool stuff?

Edit: This is a more detailed page that makes it look even better.

Can't wait till this gets Ndless though... GBA games at full speed?
Here's my sig. TA DA!
↑
Quote

Legoman314 wrote:
I wonder how much it costs, though.

Well we saw the French prices for teachers are the same as before so I guess for standard consumers too.
TI-Planet.org co-founder / co-admin
↑
Quote

Wow, so there going to release to France first? why?
"タじレタʝロㄚ?!"

We should all petition/email TI to make it happen if it doesn't. Offer 1 karma to whomever emails TI and gets a response


I thought not many peeps would actually do that... I was wrong

Don't forget, TI needs to respond... Or someone could break into obtain unsanctioned entry into the premises of TI HQ and steal borrow a prototype...

Just got a response from TI: The older TI-Nspire CX will not receive the new operating system.
Time to return my TI-Nspire I guess

andressevilla wrote:
Just got a response from TI: The older TI-Nspire CX will not receive the new operating system.
Time to return my TI-Nspire I guess

why TI... They could try to offer trade-ins though...
Oh well... Lua scripted games look better anyways (I think)
Time to learn Lua

Uh... that would be a really bad move, a huge mistake, from TI.
The ASM games from the community make it crystal clear that even with pure software graphics rendering, the existing CX (CAS) models have far more than enough raw power to draw pixels, sprites, and copy / blit buffers for educative purposes... it's not that TI can't do the same, it's probably more that they don't want to, because they want to sell brand-new calculators, never mind the fact that they're barely upgrades over the existing models.
If confirmed - and sadly, it will probably be - this is likely to backfire.

In the high-end competitors, the Prime availability at retailers remains lackluster, but the Prime G1 has had great graphics abilities for more than 5 years...
Member of the TI-Chess Team.
Co-maintainer of GCC4TI (GCC4TI online documentation), TIEmu and TILP.
Co-admin of TI-Planet.
↑
Quote

I saw that the next t3 is march 2019, and one of the things is exciting updates to the ti Nspire world. Yeah, it's propably coming out in march.

I found this link to the english page of the TI Nspire CX II-T CAS : click here.
↑
Quote

Up until now, the Voyage 200 has been my go-to non-school math tool. This very well may change that. My only question: what is a TI-Nspire's capability to create custom functions on the calculator? On my Voyage 200, I have dozens of custom functions I have developed to streamline my calculations, but is there a parallel for this? If not, will the BASIC in the Nspire II introduce this?

Sam wrote:
Up until now, the Voyage 200 has been my go-to non-school math tool. This very well may change that. My only question: what is a TI-Nspire's capability to create custom functions on the calculator? On my Voyage 200, I have dozens of custom functions I have developed to streamline my calculations, but is there a parallel for this? If not, will the BASIC in the Nspire II introduce this?

You can create functions on it. Here is an example.