That components below R5 are not easy to solder , but they look aligned . The input jack looks nice , good solder joints. Great Photos
Newbie for sure

Since my last post, I've known that the trace from R10 to the asic was in bad shape. When measured, the line wasn't open but there was a significant amount of resistance. I'm assuming I messed it up accidentally when soldering on the resistors. This really only left me with 1 option, which is to pass a jumper from R10 to the 5th pin from the top on the left of the ASIC. Easier said than done

Of course, the pins on the ASIC are extremely small and close to one another and I don't have any fancy micro-soldering equipment...
So anyways, that's what I did today and I somehow managed not to short a bunch of pins in the process

Its a bit hard to see, but I used 36 AWG insulated jumper wire. 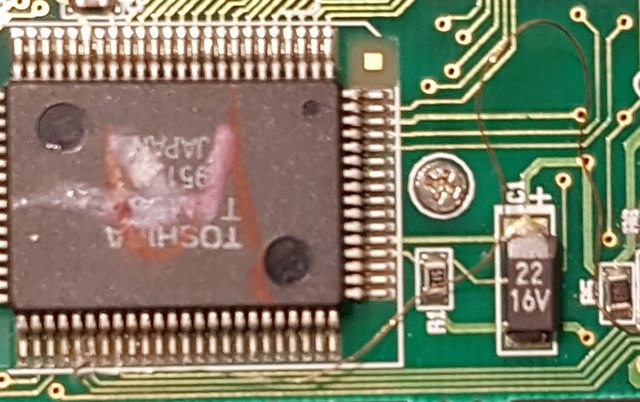 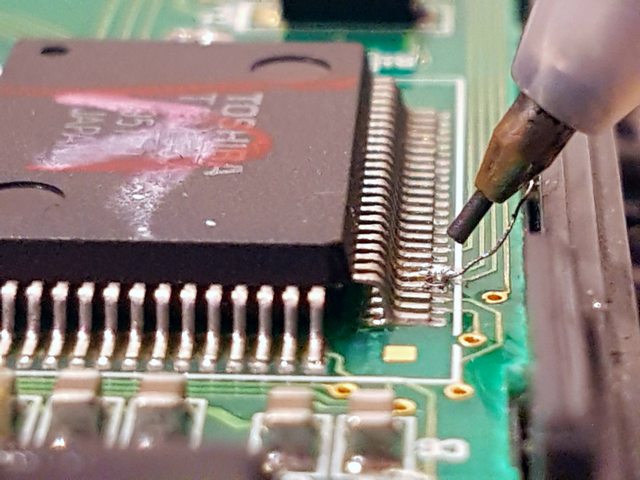 I measured to make sure everything was good and closed it back up... Unfortunately, this didn't fix my issue. Just like before, the input lines still work and at least one of the output lines doesn't. On the bright side, I can rule that out as a potential issue.
There's almost certainly a couple cold welds though since the soldering job leaves a lot to be desired (done with basic soldering tools and no flux). I'll probaly try to reflow the ones that look the worst and if that doesn't work, I'd probably just try again from scratch with proper tools and some flux

(I have a bunch of half-dead calculators anyway)