Below are numbers for my driving in 2018. This is not representative of every driver and use of this information is for a "what if" I had an EV this year, or taken public transit. 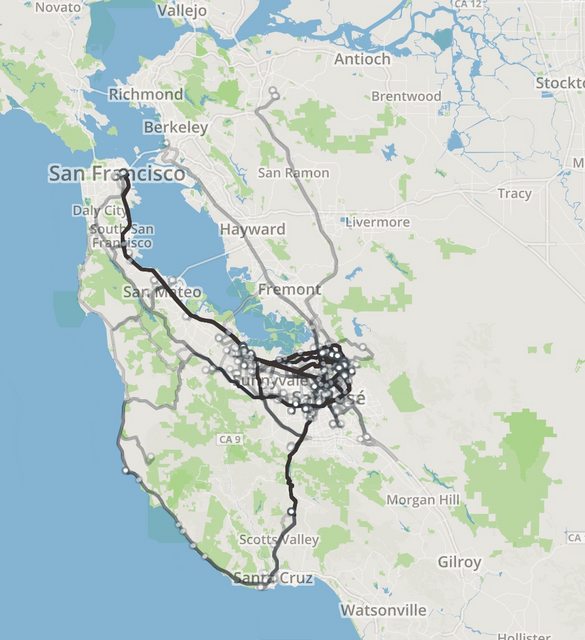 I've spent much of the last two years drooling over EVs, especially the Teslas. I've been saving money for my next car which I anticipate will be an EV. I plan to have a deposit saved up by December 2020. So with this year coming to a close, I thought it'd be appropriate to take my driving data and actually compare the numbers.

I had an eventful year with my car. I did some non-critical repairs, and got two new tires when I ran over something on the freeway. When I factor everything together, my cost per mile was 44¢. The IRS sets the milage reimbursement to 54.5¢ per mile. So I'm doing pretty good! I drove 13,819 miles this year (data pulled 12/30 @ 6pm), so my operational costs were $6,080.

Though in order to get a good idea for a direct comparison, I decided to remove the non-critical repair. I removed it because it's something I wanted to do. It was an emergency repair like the tires were. Removing the non-critical repair lowers my cost per mile to 23¢ a mile. This is factoring in the tire replacement, oil changes, insurance, and vehicle registration.

Battery Electric Vehicles
Ideally, when buying an EV the cost per mile would need to be less than 23¢. I compared the Long Range Model 3 and the 2018 Bolt. I chose the LR Model 3 because it gets the same 310mi per charge that I do on a full tank of gasoline. I then selected the Bolt because it's a popular car amongst EV buyers. I did not select the Leaf because the range is just not ideal for my use. I didn't compare a Prius as they are hybrids.

When buying a 2018 Model 3, the cost per mile is 28¢. It's a tad higher because of insurance. Since it's a new car the insurance companies require higher premiums. While it's true I'd have a realized savings of $1,200 for fuel (total_gas_cost - total_electricity_cost). But the insurance and registration completely wash out the fuel savings.

However, my vehicle is paid off. I don't have a loan on it or any sort of debt associated with the car. If I were to buy a Model 3 or a Bolt, I'd have to finance it and thus have a debt to repay every month. When factoring in a deposit of $12,000 and a 3% APR over 6 years the cost per mile is now 89¢ for the Tesla and 61¢ for the Bolt.

When factoring everything together, including potential financing, the Tesla and Bolt are more expensive per mile than my current vehicle at 89¢ and 61¢ per mile respectively.

Public Transit
As if there was any doubt, public transit is a steal. I can get a yearly pass for $880 thus saving me roughly $5k. The downside to public transit is the increased commute duration. My 30 minute commute in the morning is now 2.5 hours. It's 2 hours to go from my home to the stop closest to work, then another 30 minutes for the business park shuttle to go from the transit hub to my work. This can be as much as 45 minutes if I have to wait for the shuttle to arrive. My 60 minute commute home is 2.5 hours as well.

There are 240 working days a year, or 360 hours a year spent in my car going to and from work. Via public transit the figure jumps up to a staggering 1,200 hours. There's also places where public transit won't go. In those cases, ride sharing can be beneficial but even then a few trips would likely be beyond the realm of ride sharing. These photos were taken about an hour into the mountains. I don't log the data from the Mini Cooper like I do with with my VW Rabbit so I don't have stats for that drive, sadly. I also don't drive the Mini all that much, a couple times a year really.

I, personally, would rather "spend" the $5k per year and have more time at home and the luxury of going where I want, when I want. I can get two loads of laundry done, go for a run, and dinner prepped and made in the extra 1.5 hours I'm at home. Overall, it's better for my physical health, time management, diet, and sleep schedule to drive.

Ride Sharing
This is another "without a doubt" subject but I was curious. I checked Lyft for prices to go to work, my parents, and the shopping center. I got prices for both the "standard" fare and the carpool fare. The carpool was cheaper but never went below $1.00 per mile.

I would have spent an extra $7k, at the least, for a personal driver every day. I didn't get data on surge pricing where the fares can double and even triple.

Ride Sharing is great for one offs, going from home to the bar. It's also great for getting from a public transit stop to a destination a little farther away but you need to weigh the convenience with cost. It would have cost me $26 for a round trip Lyft of 8 miles (4 miles to and 4 miles back). I spent $8 to drive myself, $1.50 in gas and $5 to park.

With no big repairs planned in 2019 and beyond, it looks like my 10 year old car is considerably cheaper than buying an EV. I can potentially lower costs by moving closer to work and take public transit for a few miles. But rent increases the closer I get, so it may be wash. I can lower costs by buying a used EV. I still wish to buy an EV in the near future but will likely push it out a few years so I can save for a larger deposit and to let the technology mature. Perhaps in the next few years there will be an EV with a 300+mi range for $30k.

But I can't ignore the cost savings of public transit. $5k a year is considerable. That's a funded IRA every year. That's an international vacation every year. I also need to stress that the savings are in the yearly pass. If I were to buy a monthly pass, it's $80 a month and a daily pass is $7. 350 daily passes would be $2,500 and 12 monthly passes would be $960. The daily passes are still a great savings but it's smarter to go with the yearly.

Alex wrote:
Below are numbers for my driving in 2018. This is not representative of every driver and use of this information is for a "what if" I had an EV this year, or taken public transit.

Holy Gods of Cemetech, Alex. I thought I knew some seroius eco-conscious people. Thanks for sharing!

Haha, I wouldn't call myself "seriously eco-conscious" I was just more curious from a financial perspective. I don't want to put myself in financial hardship and the data shows that an EV would save me couple cents cheaper per mile over the course of the year.

Now that I think about it, it's probably better to compare a bigger picture rather than just ONE YEAR. So let's figure out the cost per mile since I bought the car in March 2013. I bought the car with 74k miles, it currently has 125k. So I've driven 51k miles. So magic numbers behind the scenes, such as estimating the number of fill ups (51,000/300) and multiplying that by my tank size and my 2018 average cost per gallon for fuel, the total cost of the car with the interest of the finance, etc etc.

My estimated total cost per mile is... $0.5217, or 52¢. Still cheaper than the cost per mile of a brand new EV. This however does not factor in oil changes, brake pad replacements, the elective repair in 2018, and a few other costs associated with car ownership. Something that maybe can be covered by the gas price estimate since prices have risen since 2013.

There are on-going debates on whether or not EVs are truly eco-friendly, which is not what I'm answering nor want to get into here. Without a doubt, I want an EV but I'm waiting for the technology to mature and standards to form. I'm hoping by 2020 standards start forming and that by around 2023 the tech is in a great place. My car is going strong and will (hopefully) carry me through 2020 and beyond.