I've been wanting to do a smart mirror for most of this year but always put it off. This past weekend I saw Best Buy was selling a 128GB MicroSD for $25 and a 32GB for $10. Nothing fancy but the 128GB card was about $100 off, so I sprung for both of these cards.

I already have a Raspberry Pi 3b+ with a 32GB card but I didn't want to lose the data on the card, hence the new 32GB. I downloaded Raspbian with Desktop from the RPi website and proceeded to flash the OS to the card but had the hardest time. After each flash my computer would reject the card and the RPi wouldn't read it. I googled, I tried different flashing programs, tried different reformatting programs, watched countless videos seeing if I missed a step, etc. Each time I watched a video and failed, I'd pause the video more often and look at all the details. I noticed that in one video the RaspianOS file was 4GB, mine was 2.53GB. I went back and downloaded RaspbianOS again, but opted for the non-Debian stretch version and went for the Raspian Stretch.


After downloading the 1GB file, I flashed the microSD card with it and my OS did not kick back an error after the card was flashed. The Raspberry Pi booted up and I was finally able to move on.

I plugged my house mates keyboard into the Pi and tried to open Terminal without a mouse. Had to google that, but I managed to do it. I was able to open the "Run" dialog but couldn't figure out how to launch the terminal. It's lxterminal, for those coming from a web search like I did. Edit: Also, it's selectable from the menu when you press the Windows key. I had some issues during setup when the keyboards number row wouldn't actually send numbers. Which sucked since our WiFi password has numbers. I figured that out after several failed connection attempts. Thankfully it had a number pad, and I was able to use that.

The next big issue came when I had to install MagicMirror itself. According to the MagicMirror website, you need to start the line with curl -c ("$. Which was problematic, since the number row didn't work, I couldn't add the parenthesis or the dollar sign. Also, the backspace key sticks and erased the whole line. It was at this point I went into the RPi settings and enabled SSH so I could just continue from my laptop. I was then able to just copy & paste. Which was so helpful.

Everything works so I moved on to adding modules which is where I currently am. I've already setup the Google Shopping List module and am looking for others. I have some high ambitions, such as adding a sensor to have the screen turn on when someone stands in front of the mirror for a certain time. There's even a facial recognition module, that'll then personalize the mirror for the user standing in front of it. So, my house mate wouldn't see my calendar if she stood in front of the mirror. But, that's probably a bit beyond me for now. I also thought about doing a touch screen but that's for sure out of my capabilities.

My next steps are to source a monitor to use, get a two way mirror, and some wood to frame it all up. I want to make it a full body mirror, so it can sit/rest on the ground rather than be hung on a wall. I also need to turn off the automatic screen saver/display sleep on the RPi.

I'll be sure to keep you guys updated as things progress.

Here is a CAD of the backside of the unit. It's a 27" monitor. The Pi will run off USB power from the monitor, and the monitor will plug into the wall. I might go with a smaller display so I can actually center the display on the mirror and have room for the Pi. But we'll see. 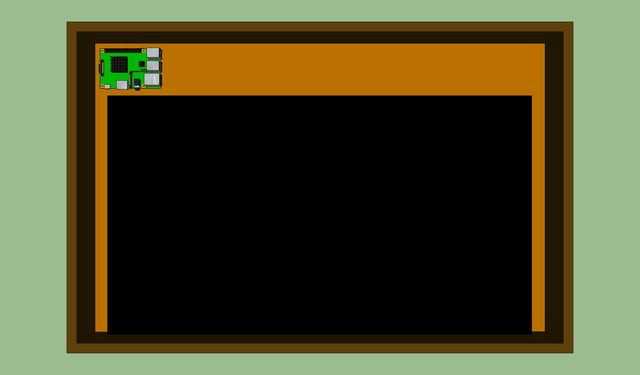