I'm busy with a pretty cool project for school, so I decided to share. Each project group received a RC car, something like this, which you can control with a remote control. Of course, this is just the start. Our task was to remove the IR part and replace it with an Arduino. So the Arduino should be able to control the car, accelerate, brake, steer, and meanwhile log things. To make it more interesting, the car should follow a 100-meter long track, and at the end there is a slope of 15% IIRC, and right after the slope the car should automatically stop. The project started (like always) with writing boring reports and stuff, but a few weeks ago, we actually received the car, and started modifying it. We ordered an Arduino Uno, micro SD Card module, a MPU6050 (accelerometer and gyro) and 4 IR detectors which could detect black/white (the car have to follow a white line on a black background). Today this all finally arrived (yep, pretty slow), and we started to test things. My friend and I started with testing the IR detectors, which turned out to work pretty well. Right after that, I started testing the gyro thing, while my friend and others started fixing the car (yep, we're boys, we always play with that car

). After messing around with MPU6050_tockn first, I found the real MPU6050 library. After installing this library, it worked perfectly, so once it's placed on the car, we can start using it. Unfortunately, I don't have a picture of the real car anymore (it's still broken anyway..), but here's the MPU6050 module, which I tested carefully. 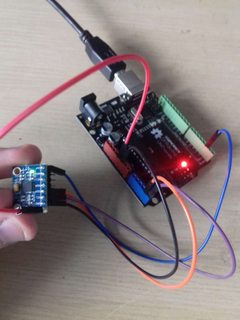 Officially it's supposed to be ready next week, but since the sensors and other stuff arrived pretty late, that's not gonna happen. Next week I will take a nice picture too.

I've got more footage! Today I worked together with a friend to fix some things, and oh well, we broke the MPU6050 module

Apparently everything works fine, but it doesn't get any voltage anymore, probably because we soldered too much. Anyway, here's the car: 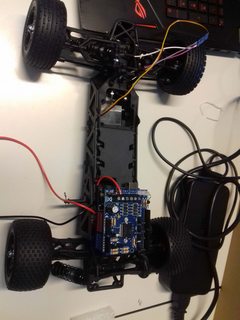 Currently you only see the Arduino + motor shield and a lot of random wires. Next time we will connect the sensors at the front (I've all tested them and they work), and hopefully fix the MPU6050 module. If not, we need to buy another one, I fear. We use these sensors (4 next to each other, 2 for detecting the line and 2 for the left and the right of the line, in order to detect sharp turns): 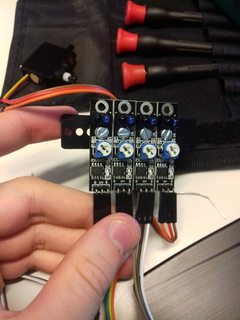 I've already written a large part of the software (without testing), and once everything is installed we can start testing and debugging that.
Sola Fide
↑
Quote
Register to Join the Conversation
Have your own thoughts to add to this or any other topic? Want to ask a question, offer a suggestion, share your own programs and projects, upload a file to the file archives, get help with calculator and computer programming, or simply chat with like-minded coders and tech and calculator enthusiasts via the site-wide AJAX SAX widget? Registration for a free Cemetech account only takes a minute.