Recently, the Minecon Earth livestream was broadcast. Many announcements were made for the upcoming update 1.14 during the stream, so I decided to make a topic summarizing some of the most relevant ones.

1.14 will be focused on ocean life, adding shipwrecks, coral, dolphins, and tridents. It will also make major changes to water physics (probably; the devs seem to be struggling to find a good way to implement these changes), allowing water to flow through things like fences, iron bars, slabs, ladders, and signs. Unfortunately, this will probably break any contraption that uses water to move items or players around. The devs mentioned that they might add a new block that could stop water without stopping items and players. 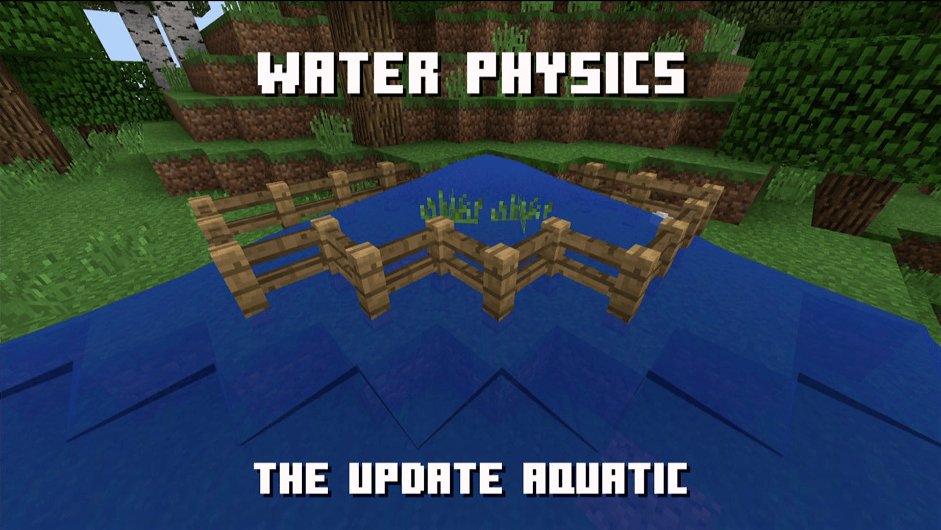 1.14 will also add the mysterious "Mob B," which will spawn at high altitudes attack players who have not slept in several days. This will affect technical players the most, as it might use different spawning mechanics which would cause a major drop in performance for mob farms. During the livestream, "Mob B" was voted for by the community, beating out three other mobs A, C, and D. The developers have mentioned that the other mobs will never be implemented into the game, even though serious thought seems to have been put in for the designs for these mobs.

1.14 will also implement 3 new enchantments, Loyalty (allows tridents to return to the player), Impaler, and Slipstream Dash. This will make it more difficult to make a villager trading room, both by adding more enchantments that need to be obtained and by making it slightly rarer to find a villager selling the book you don't have. However, Slipstream Dash seems like it might give a speed boost that might stack with the effects of a speed beacon, which sounds very useful.

1.13 snapshots have already begun development. The main change in these snapshots is "The Flattening," a major change to the way blocks are stored in chunks. This breaks, fixes, and in general changes All the Things. Current snapshots are extremely buggy, and a lot of thing behave differently then before. Why would the developers decide to make this change? The Flattening removes a hard block ID limit which was completely filled up in 1.12. This allows the developers to finally add lots of new blocks, like uncarved pumpkins, bark blocks, and the aforementioned coral. The other, more technical effect is that each block ID is now unique per inventory item. For example, Spruce Wood Planks and Oak Wood Planks previously used the same ID, "minecraft:planks," despite being two different items to a non-technical player. In 1.13, they were split into "minecraft:spruce_planks" and "minecrafk:oak_planks." All blocks that share the same block ID can be placed with the same inventory item, and block states are used to determine things like direction. This change will directly affect very few players, although the minor and major changes to behavior caused will almost definitely be noticeable. The syntax and function of commands are also changed, and command entry has been refined with a color coded real-time help interface. (I sound like a snapshot salesman...) 1.13 also allows admins to add custom recipes without plugins or mods. Horses also got a new model which is similar to the models for other animals.

My personal thoughts about the livestream:
I did not enjoy the majority of Minecon Earth. It lasted about 90 minutes, and I feel like if I would only watch about 20 of those minutes if I knew about the stream beforehand. The only reason I stuck around was for the mob voting and feature announcements. All of the announcements happened in the last 20 minutes. Everything else was basically filling time. There was literally an ad for another of Microsoft's services, Mixer, and a musical promoting a (paid?) HD resource pack for Bedrock editions, in the middle of the livestream. The hosts seemed to have very little knowledge of the game. The mob voting ran for a very limited amount of time and took place as a Twitter poll. Huge quantities of people watched the stream and like 1 in 50 voted in the poll, probably because they did not have a Twitter account (the age limit is 13) or were not prepared to find login info in the amount of time the poll ran for. There was no possibility for reasonable communication almost anywhere because someone started a rumor that you could type /cape (username) to get a cape. This flooded the chat, the comments section, all related Twitter posts, and the Minecraft Discord. It wasn't too big of a deal for me because I already have a Minecon cape from last year. I definitely enjoyed last year's Minecon much more, as I was able to meet YouTubers, talk to a developer in person, and attend panels that gave useful information about things like servers and modding rather than being purely for entertainment.

I would like to hear your thoughts on the changes and on the concept of Minecon as a livestream rather than a convention. I'm think I'm just going to stop here before I make this sound more like a bad YouTube outro.

This is pretty cool. Seems the 1.14 will break a lot of farms as signs are commonly used to stop water from falling downward but still allowing mobs and items to fall. 1.13 also seems to break a few farm designs. As an admin I think this will either be a fun challenge for our Cemetech Server Members to tackle. I look forward to seeing you guys work around these new changes.

Additionally, what were your opinions on Mobs A, C, and D?

I was originally going for Mob A before the Update Aquatic was announced, due to a lack of life in the oceans and also the possibility for unique drops, although I changed my mind to Mob C later when I heard it would have the ability to remove enchantments from items. I ranked Mob D third, as the nether is actually fairly peaceful except for ghasts, and Mob B last because it would break certain farms. The actual results were B,C,D,A. Every vote was incredibly close, with a margin of only a few percent, which is further reason that the other mobs should be added.

Minecon as a livestream in lieu of a convention? Interesting. I can only speculate that the audience of Minecraft has changed so dramatically that they fear most convention goers would be kids and their confused parents.

As an Alpha player, the technical changes don't really seem to attract me back into the game. They just don't seem interesting enough.
Disclaimer: I am a robot.

Yeah, 1.13 wasn't intended to be an update that attracts new players. The primary reason for it is that, except through a major and time consuming change to the way chunks are stored, they literally could not add another block to the game without removing another one. Hopefully this means that we will get some interesting new blocks and mechanics in future updates now that the developers no longer have to worry about a block limit.

As a player who started in release 1.5.2 in 2013, I don't really like the way the past few updates have been going. Every mob added from 1.9 on either cannot be farmed (is part of a rare structure) or has no unique drops (like the zombie variants). Also, the only major new mechanic added to the game in that time was the shulker box, which can only be obtained through world generation in the end, and the observer, which only affected the most technical players.

I feel like a new mechanic on the same level as brewing or the hopper would greatly help the appeal of the game to an audience besides "kids and their confused parents" who never play survival or creative themselves, instead playing minigames and watching YouTubers. I also think that the world generation sucks considering how hugeprofitable the game is, and that more variety in the terrain and biomes is necessary if Mojang wants to promote exploration as one of the main purposes of the game.