Using xLIBC "DrawString" (real(6), is there a way to change the size of the text?

OOOO a topic about xLIBC!
Unfortunately, there is no built-in easy method to change text-size in xLIBC. You could make your own spreadsheet, and reference the sprites through their indices, but that's annoying. Another option would be to use the Output() command to get larger text, and you can also play with the screen res to get smaller fonts. Of course, if you decide to try doing things in full-res, you might have some trouble with real(6,..) because those were meant to be used in half-res. For that reason, if you have text that you would like to span across both halves of the screen, you will need to switch buffers. Basically, if you are in full-res, using the commands meant to be used in half-res, you have to keep using both sides of the screen as if you were in half-res. Here is an example of both real(6,0) and Output() used in full-res. you can see that the text is different sizes. 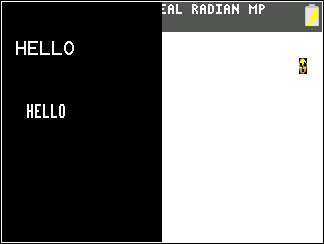 Output() is on the top, and real(6,0) is on the bottom. I didn't bother setting the background of the other side of the buffer, but of course, you could. And if the screenshot was taken in half-res, then the entire screen would be black and the two hellos would be fatter, but still proportional.
So in total, you can get 4 different font sizes if you try hard, which are: