This weekend, Cemetech is back at World Maker Faire in New York City, introducing people to learning coding and electronics with graphing calculators. This is our sixth annual presence at World Maker Faire, ever since our first visit five years ago with rudimentary displays. In the interim, we have gone through many iterations of our demos and displays, I've been joined by dedicated Cemetechians Alec "qazz42" Szigeti, Tim "geekboy1011" Keller, Thomas "elfprince13" Dickerson, and Nathaniel "Eeems" van Diepen, who have volunteered their time, effort, and money to help make our Maker Faire booth a success. We have garnered some modest press coverage, we have collected a few new Cemetech members and reconnected with old ones, but most importantly, we have introduced thousands of Faire visitors to the fact that they can learn programming, electronics, and other STEM subjects with their graphing calculators. We're excited to continue that mission this weekend.

This year, we're bringing back all of our proven displays, plus one new one that we (specifically, geekboy1011 and Iambian) created. Here's what we're displaying:

If you're in New York City, we encourage you to hop on the 7 train to 111th Street in Queens and come visit World Maker at the New York Hall of Science. We'll be there 10am to 6pm this Saturday and Sunday, September 23rd and 24th; our table is in the Maker Annex section of the Faire, in Zone 3. See you there! 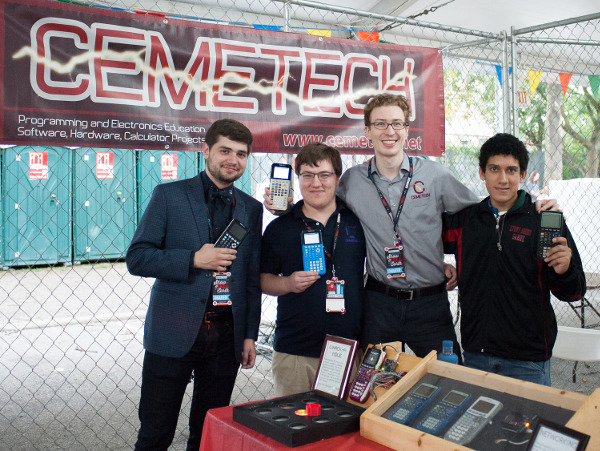 Looks like Canadian fashion is still stuck in the 1980s.
http://tcpa.calcg.org/
↑
Quote

Glad to hear it, Kerm! maybe I'll get to come, since I'll have a few months before basic training.

Yeah, I should have posted notification about this much, much sooner, so people could make plans to come and visit us. Next time!

Well, how did it go this year? Got any cool pictures to show us from the weekend? Enjoy seeing some newer Cemetech members there? I hope to see some stuff from the event as soon as you're able to post it =)

Michael2_3B wrote:
Well, how did it go this year? Got any cool pictures to show us from the weekend? Enjoy seeing some newer Cemetech members there? I hope to see some stuff from the event as soon as you're able to post it =)
Yes, yes, and yes! We're (slowly) working on putting together an article and posting some pictures beyond what was on Twitter and Facebook. Mr womp womp and Pieman7373 came to help both days, which was awesome (and they're both very cool dudes), and Botboy3000 visited as well, which was great. We met a variety of community members old and new who have stopped by before and a few who have not. And qazz42 and geekboy1011 returned with invaluable help once more. We even had calculator-controlled trains.

There are 291 users online: 1 member and 290 guests.
Members: AchakTheFurry.