(Une version française est bien sûr disponible aussi!)
The year is 9108. Québec City is celebrating its 7500th anniversary. The overpopulated metropolis of 900 millions inhabitants lives an idylic, eccentric, but at the same time, dystopic lifestyle. Peace is about to end, though, as aliens called the Tibestians are now getting ready to wipe us out.

In this satirical and over-the-top action-RPG inspired from Ys and Mega Man, you play the role of a reprogrammed Tibestian robot who is now friendly (although scary for locals) who has to go defeat his master, who has setup a robot-building factory North of the Harlaka District and is now threatening the human race.

It is one of the rare RPG Maker 2003 project to feature real-time action battles without using mods and hacks, too.


Original post wrote:
I decided to take another extended break away from programming to revive an old RPG Maker 2003 project I originally started in October 2008: Superstar Hero. The game originally used music from TIMGUL, including some of my songs, but it now only uses my songs, including a newer one.

The game used RPG Maker 2003, which was a not-so-legal fan translation available at the time, but an official one came out in 2015 on Steam, fixing many bugs, so this is what the game uses, now.

I do not use the built-in battle system, I instead use a combination of events, as the game is action-based, like Ys and Zelda series, unlike other RPG Maker 2003 games, which are turn-based like Final Fantasy on the Super Nintendo. You don't level up as you kill enemies, you instead buy upgrades at a shop with the gold you receive. The game focuses heavily on killing stuff rather than exploring, due to some arcade influences.

As for why I used RPG Maker, it's because of my extended break from programming and the fact this project was started with it. As for why I use 2003 instead of VX Ace or MV, well, I prefer the SNES-style graphics resolution from 2000/03 and the Steam version fixes most bugs associated with Windows Vista/7/8/8.1/10 compatibility issues.

The story takes place in Quebec City, in the year 9108. Here is a video of the game in action: 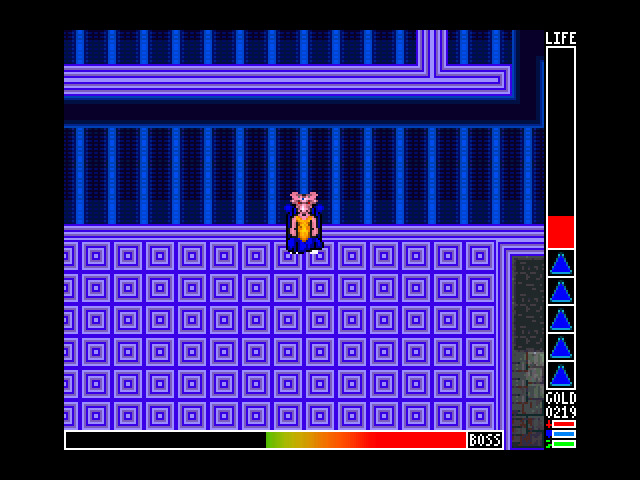 The following was mostly experimenting with pseudo-3D in RPG Maker 2003 v1.12:

The optional boss fight has been updated graphically. By the way, the boss name is "Tutorial" xd


The title screen has been updated as well, with a darker sky, a warning for people who got epilepsy and motion sickness and the game controls.

Thanks, and yeah that was the thing I was going for for this particular game. While I don't want to go full Touhou-mode I wanted something that's essentially a Ys<>Mega Man cross-over with F-Zero graphics.

Which reminds me, if you haven't seen this song video before, it contains plenty of (zoomed in) clips of the game https://www.youtube.com/watch?v=XDbxSNuJ3RY

Also this project is not dead, but on indefinite hold as I am at the hospital since last month and have no access to my old computer on which the most recent version of this game is located. I made new songs, though, and a version of the game is available for download as a demo at https://dj-omnimaga.itch.io/superstar-hero (save files might not necessarily work with future versions).

Wow, I was sure I had posted version 0.10 and 11 here, but it looks like I was carried away. Anyway, it doesn't matter, because version 0.12.1 is now out at https://dj-omnimaga.itch.io/superstar-hero and here's what's new since my last post:

-A long-standing bug causing the amount of gold obtained from kills to be incorrect most of the time is being fixed right now. Basically, under the old system, the amount of gold gained per kill was directly tied to the total amount of damage the enemy took before dying, rather than their max HP, resulting into an unintentional "bonus gold feature" that caused lots of problems when offensive items were used.

-Some enemy gold amounts were adjusted after fixing the bug.

-Also, all item shops are now called Cears (in reference to Sears).

-Some graphics were added or updated to blend better with the rest
-More shadow effects added (mainly on Quebec Bridge II)
-New enemy implemented
-Crystal Hill area completed
-Wind in Crystal Hill no longer pushes the hero to the right when walking and instead just slows down walking overall. This made collision detection impossible due to RPG Maker 2003 limitations, otherwise.
-Treasure chests were added to the game. All of them are locked and contains gold. They can only be opened with the governor house's key.
-More bug fixes
-Various map changes around Hooleigan Village
-Fixed bug with HP bar not refreshing to 0 HP when dying
-More shadows added in Hooleigan area
-City of Gold will now be home of a secret dungeon of the same name
-Dynamic lighting effect added to one tile, sort-of.
-Added event that unlocks City of Gold dungeon.
-Warning about mature content and for epileptic people moved to a separate screen before the game intro
-Some new tiles added for City of Gold dungeon.
-When you have 25% HP left, a warning sound now starts playing and the HUD becomes orange.
-The second save point located in the ruins has been moved a bit further, to the City of Gold
-City of Gold expanded
-The boss called Anxiety now makes an appearance outside said boss fight and thus harasses you as you move through one of the City of Gold tunnel and the following room, but you can't beat him in those areas.
-A new monster has been added.

I saw your tweets, but I didn't realize that there was a release!! I'm downloading it right now :3

-I have begun translating the game in French, but the translation is only 10% complete so far.

-The game now checks if the save file that you opened matches the current game version number. If there is a mismatch, then the HUD/UI is refreshed to erase all display glitches, then the game's current version number is stored inside a variable for when you save your game later.

-Fixed bug with one of the final events being marked as completed earlier than supposed
-Added more glossy tiles
-Music changed for two bosses
-Fixed a collision bug with the ruins door
-Replaced some village graphics to match the rest of the artwork.
-Replaced some ruins graphics to match the rest of the artwork.
-The game is now gamepad-compatible, including item usage
-Fixed bug with first NPC talking twice (the second time always being in English no matter language options)
-Other things I forgot

I am happy to announce that Superstar Hero - The Original Soundtrack by DJ Omnimaga has been released on Bandcamp. If you already own the four following albums, then you do not need to get the soundtrack, as all game songs are also available on them: 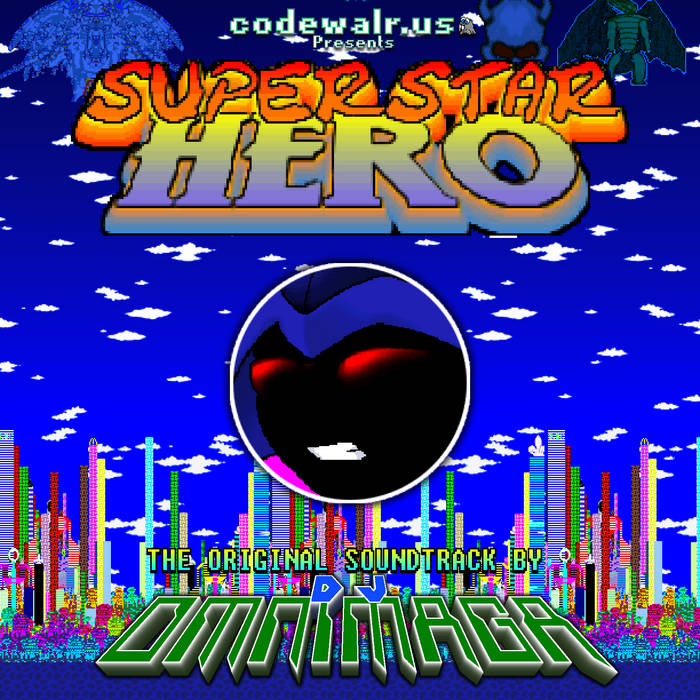 Superstar Hero is set to release on Steam on June 13th. The soundtrack is already available at https://djomnimaga.bandcamp.com/album/superstar-hero-the-original-soundtrack . The English version of the game is pretty much complete, while some text is missing in the French version (and will default to English accordingly). Here are the changes since the last news post:

-Translated entire village, bridge and entrance of Quebec city to French.
-Translated Sainte-Foy district to French.
-Translated the toy brick guards in Sainte-Foy and Harlaka to French.
-Translated Saint-Roch outdoor area and Montcalm tower to French.
-Fixed display issue causing messages to overlap on items.
-Fixed map visuals in the Quebec City entrance.
-Fixed map visuals in Hooleigan forest.
-Fixed loud acute noise when the mini-boss song starts.
-Fixed some text in shops
-Fixed the end text not showing
-Fixed bug with Godess of Light pathfinding after talking to her for the first time (she didn't make it to the river anymore)
-Moved Godess of Light one tile left to prevent accidental interaction when exiting Tibestia Lab. It was a long overdue, as she was really in the way.
-You can no longer open the quit/language menu during an event such as riding Walrus Express
-You can no longer walk over thin air right next to diagonal cliffs facing Southeast/Southwest
-Applied some changes to Hooleigan cliffs layout to accomodate the aforementioned bug fix.
-It's now possible to save your game during the intro, right before the first monsters, so if you die you don't need to re-watch the entire intro again.
-The sky is now lighter in color
-There are now two ways to beat the game.
-Toned down the flashing screen when you die
-Your character now interacts with shadows, meaning that he also becomes darker while walking through a shadow.
-Fixed shadows in Saint-Roch so that they don't overlap on sewer grids.
-Changed the reward for defeating one of the super-bosses.
-It is no longer possible to reach level 20 attack.
-The blue enemies in Crystal Hill now causes a minimum damage of 1 rather than 0.
-Game controls are now shown in the game menu rather than the title screen.

Here are the changes since the last beta release:
-French translation is now complete.
-You can now increase water level when entering Forgotten Ruins from Hooleigan and lower it when entering from the City of Gold, so you can now travel to Quebec in both directions.
-Improved some graphics in final dungeon area
-Added more enemies, including brand new ones, in various locations.
-Added a new map in Hooleigan Valley/Forest with new graphics.
-Changed cliff graphics in Hooleigan Valley/Forest
-Added new character graphics in various locations.
-Changed the font of some text.
-Moved boss HP bar down by a few pixels.
-When you beat the game, it now shows the quest completion percentage, for those who want to 100% the game.
-Fixed HUD bug after riding the Walrus Express from Saint-Roch to Sainte-Foy.
-Fixed some text in one of the last Cears store.
-Fixed major mini-boss defeating bug happening when leaving the room less than half a second after the fight, resulting into the player not being able to advance further in the quest.
-Fixed display bug introduced in version beta 0.15 in the final dungeon.
-Fixed HUD bug after riding the Walrus Express from Saint-Roch to Sainte-Foy.
-The HUD no longer displays when riding a Walrus Express or changing the water level in the ruins.
-New and animated title screen, with options menu!
-It is no longer possible to open the menu during cutscenes.
-Some Hooleigan Village residents now give gameplay tips and advices.
-Some rocks that can be pushed now blocks you after the intro, forcing you to push them to get to the village.
-And more importantly, the game is finished!