Any progress, PT_? or too busy on ICE and Curve Fever?

Other than that, this looks great; keep it up!
CSE obituary

Are you planning to work on this after C ICE gets released and any issues smoothed out?

Good news! I decided to pick this up again, and I've made good progress with the graphics. Luckily I found the complete spriteset, so I've pretty much finished all the graphics! There's not much to show though, but I've changed the entire codebase, added all the graphics, and improved some things. I have good hopes the speed will be above 10FPS, which was my original target. This week and the next year (heh, that sounds cool

) I will work on displaying the map, buildings, units, and after that the actions, like fighting, moving and whatever. Stay tuned! 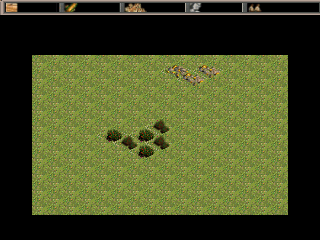 As you see here, there's a black border around the map. I will write some code to make it pretty much fullscreen, except the top bar with the resources and population, and a bar at the bottom with some key actions.
Sola Fide
↑
Quote

This is one of the coolest projects for the calculator I have ever seen. Really excited to see where this goes!
WHY WON'T IT WORK!
↑
Quote

I will probably leave the left and right edge black, because that is too hard to do, so maybe I can leave some buttons there or whatever. Now gonna work on removing the black edge at the top.

I am really looking forward to this project!!!

Added trees (note that I need to redo the graphics, they have a pink border): 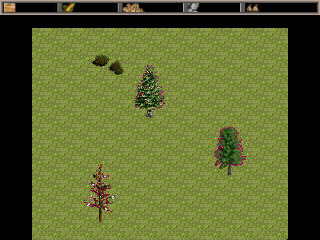 Cool! Why does this use numpad-arrow control instead of regular arrow control? Or is that for the cursor?

jcgter777 wrote:
Cool! Why does this use numpad-arrow control instead of regular arrow control? Or is that for the cursor?

Yep, I removed the cursor for now, because it was way too big and there are better things to do.

Also, here's some more general information about the sizes and whatever:


And that's it! I'm working super hard to get everything working so stay tuned. If you really want to follow the process, join #aoce-dev on EFnet

It looks cool! Hope there won't be too much left over stuff to do!

Because no building uses pink, so I decided to use that as the transparent color 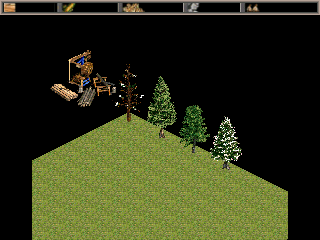 Awesome! You're making some great progress with this lately

I don't really know how to draw all the units. I can't draw them after the tilemap, because then they will be displayed in front of everything, which is clearly not right. I can't draw them before the tilemap either, then the tiles will overdraw them. So the only solution is to display them together with the tilemap... which is almost impossible. Since they are constant moving, my idea was to put all the units in an array, with their coordinates, health, attack points etc.. but how do I draw a unit at a certain tile? Going through the entire list all the time is way too slow

Forgive me if this seems dumb, but couldn't you simply draw the units+trees+buildings all in a single loop, and draw them from the top of the map down? I mean this is isometric 3D, and I believe that's how people typically do it with the layering.
TI-68k basic is the Bomb.
↑
Quote

Why would drawing both the map and the units at the same time be impossible? Is it because drawing the entire map in one go is more efficient?

Regarding drawing units that are not covered by anything:

If you only want to redraw part of the screen at each frame, I'd suggest animating the units (given than the user does not scroll the map, otherwise you'd be back at step 1 and re-drawing it entirely) by saving the screen rectangle on which you're about to draw each unit, so that you can "cancel" the drawing by restoring this rectangle when you want to draw the next animation frame. (In this case, make sure you cancel the drawing of each unit in reverse order.) I don't know if it's technically possible, but I think it'd be fairly efficient.

Another way would be to redraw all the tiles and units which are totally or partially covered by your unit, and those that they themselves cover, all the way up to the top of the screen (in reverse order, of course), but it may end up even slower than redrawing everything if not careful enough (ie. some things might be redrawn twice).

For units that are covered, the simplest way would be to redraw what's covering them once the new frame is ready, but you'll end up redrawing things from top to bottom (as CodertheBarbarian suggested).

The most optimized idea which I can come up with right now is to draw "static" objects (eg. ground, non-animated buildings, etc) and "dynamic" objects (roughly animated things) to different layers. Then, when you want to do the regular update the screen, you'd redraw the dynamic layer and perform the layer merge with the static layer when copying it to VRAM. This way, you only have to perform the merge on the animated areas, which I think is pretty efficient.

I have almost no knowledge of the platform however, so I hope these suggestions make sense.

Edit: I even forgot to tell how great this project looks. I'm amazed that so much can be achieved with pure assembly. Good job!

Could you draw the "floor" tiles, then the units/troops/villagers, then the buildings and flora?

This looks amazing. Well done.
Try out Village, a cool Esolang!
Some, but not all, things and people care about not who you are, but what you can do. they may seem odd, but are good judges of your skill and ability.

I found a way to display them, thanks for all the replies! Have some more eye-candy:

Sorry for the white artificats, I haven't updated CEmu in a while