I'd like to know who YOU think should be President.

Edit by Alex: Added in the two major Third Party candidates.
I am not a serious gamer. I am also a cordcutter and a stinge.
*mike drop*
*hides*

Please win Kerm, the government can use a little bit of z80.
Disclaimer: I am a robot.

I vote for myself.

Poll is missing Bernie Sanders option, but other than that, I'll go for an ego vote.

Obviously "anyone except Trump" is also a valid option to prevent the destruction of the American oligarchy and probably the entirety of the civilized world.

TFW you live in a normal country in Europe ^.^

Anyone but Hillary in my opinion.
Thinking about math....or C++
↑
Quote

I definitively hope that Opossum Massage Simulator election prediction is wrong. While I don't trust Hilary, I would rather choose her than Trump and one of those two is pretty much guaranteed to win, IMHO, since third parties usually never win.

Anyone but Donald Trump, Hillary Clinton, Other, Gary Johnson, or Jill stein.

Actually that would be a good rule of thumb:
In the very most cases, if a person has made it as far as a presidential candidate, it can't be trusted anymore.

Trump is an exception, there it does not really matter if you trust him or not, because you're talking to a wall by the time you finish.

I vote KermMartian as president and KermPhD as vice president.

Caleb_J wrote:
I vote KermMartian as president and KermPhD as vice president.

I fully support your votes

As a maple chugging beaver, the murican election is quite worrisome. I honestly think Kerm could probably do a better job than any of the actual nominees, that said, he is not on the ballot, so I'd vote for crooked Hillary. All she's got going is basically the "I'm not as bad as Trump" card, which I guess is enough to earn my meaningless beaver support. I was definitely more of a Bernie Sanders advocate, but I guess he's also out of the picture

While he isnt a major third party, Evan McMullin may win Utah. In recent polls he has been pretty neck-and-neck with Clinton and Trump. This is good because it shows that those crazy Mormons are smart enough to see that neither Trump nor Hilary are suitable for president.
↑
Quote

Personally, I believe Trump or Johnson would fit the role. I agree more with some of their ideals than with Hillary. Unfortunately, I can't vote till next year, but I'm exercising my civic duty early, because I'm actually giving myself a political viewpoint. It's great being 17.
Thinking about math....or C++
↑
Quote

I love being young enough not to be responsible for voting.

What do you get when you multiply six by nine? Forty-Two. | TI-Monopoly

While I can't vote, I'm easily a Hillary supporter. I'm being a complete idealist, but Obama didn't destroy our country in 8 years, so I have no reason to think she'll destroy it in 4. I'm convinced that Trump, on the other hand, will ruin America (at least, as we think of it today). I mean, this is a guy that wants to have Bill Gates close the internet. (and that's not even his worst stance/idea)

(Plus, I actually think she could do work, and I'm a fan of most of her stances)
↑
Quote

The poll also lacks Castle, who I voted for. Wouldn't vote for Sanders cause he's too socialist for me.

It's been a while since I participated in a political debate on one of the TI commmunity's message boards. The first time was in 2002, for the French presidential election, where an extreme right candidate got into the second round because the French extreme left said "oh, left wing is not left-leaning enough, we are the true left wing". Too many people voted for these crooks and evicted the left-wing candidate from the second round, and caused eveybody to withstand 10 years of right-wing, economically liberal government after that.
But anyway. The stakes are much higher here (USA, 2016) than France, 2002.

First of all... you know, a number of countries use (far) more "socialist" views than the USA does, and they're doing pretty well, both economically and humanly

Much less inequality and poverty, better education for the masses, longer life expectancy (despite Obamacare, the USA remains a complete outlier on a graph displaying life expectancy as a function of time and average cost, with average expectancy still about 5 years lower than the best countries and health care about twice as expensive as the second most expensive country - sadly I can't find the link to that eye-opening graph quickly right now, but yes, it's based on serious publicly available data...), etc. That's because the powerful machine for transferring trillions of dollars of money from the poor to the rich, namely economical liberalism, was implemented less, and has therefore less damaged other countries.
Where I live, Democrats would be far right because of their ultra-liberal views, and Republicans definitely extreme right, due to racism / xenophobia, in addition to even worse ultra-liberalism.

If one's aiming for self-destruction of the Western world and probably most of the world, then voting for an unstable proto-fascist, serial populist liar (I saw a bar chart indicating that Trump was, by far, the most "pants on fire" and least "completely true" candidate among dozens when going through fact checking, while Obama and Clinton were the two least dishonest candidates with the most "completely true" and the least "pants on fire"), serial public insulter (a respected newspaper recently made a full two-page list of his recent insults !), proud serial sexual assaulter (...), pro-nuke usage, and lots of other nastiness and craziness, is part of the way to go.
Brexit, voted mainly by old dumb and misled (the amount and magnitude of lies told to them was staggering, just like in the US presidential election) people in rural areas (who won't suffer the consequences of their own silliness for more than, say, 10-20 years, and won't switch countries), while young educated urban people (who will suffer the consequences of other people's silliness for 40-60 years, and for whom leaving the predictably destroyed country is easier) mostly voted "Remain" - with good reason - was another milestone on the Western world destruction path, too, pretty much due to the same loathsome tactics by the "Leave" camp. The rest of the world told them that they were screwing up big time, too.

I'll leave that as a closing note: 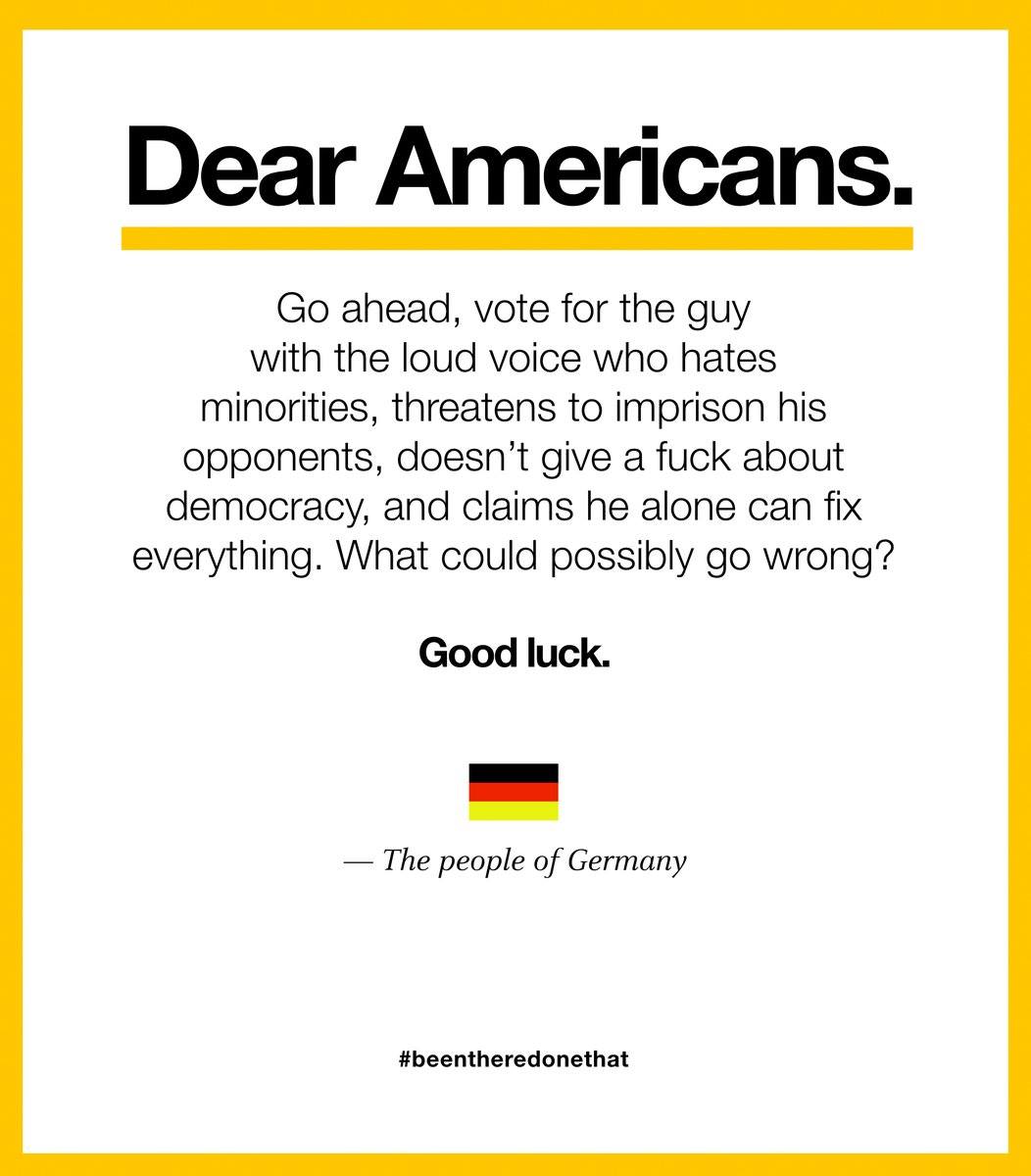