The other day I was scrolling through my Facebook feed, and noticed a post from Casio Education claiming the Casio fx-9750GII was better in the classroom than "the competition". They compared the speed, functionality, and ease-of-use of their calculator to the popular TI-84 Plus CE. This intrigued me, as I'm a pretty diehard fan for the TI-84 Plus family, and had to see what they were offering up as proof.

So, I watched the video, which had them running an emulated Casio fx-9750GII and an emulated TI-84 Plus CE side-by-side. The person recording input the functions:

To my surprise, the Casio calculator spit the image onto the screen as soon as the Draw tab was pressed. And to my dismay, the TI-84+CE just sat there when the Graph button was pressed, and pondered and equated where to put both lines, one at a time. My first reaction was, "Surely not. Something finicky is going on here. They've obviously done something with the software to speed up theirs and slow down the 84+CE."

Of course, I had to confirm the speeds myself on both of those respective calculators, and sure enough, the results were correct. This set me on a hunt to see how other graphing calculators performed graphing these two functions. I ran the test on the:

As you can see, the list is quite extensive. At the behest of Christopher "Kerm Martian" Mitchell, I even recorded my experience testing each calculator. Note that I would have included the Casio Prizm, but for some reason my keyboard is no longer responding and I'm unsure what could be the cause.

Anyways, it was quite interesting to see the varying results I came across on such a wide variety of graphing calculators. The HP Prime, the TI-Nspire, the Casio fx-9750GII, and the Casio fx-9860G were quite quick to get their answers displayed on their graphs. You can see results in the graph and video below.

If graphing things isn't a 'make or break' reason for buying a particular calculator, I highly recommend you checking out our Back to School 2016 guide regarding which calculator is currently being recommended for this school year's purchase. 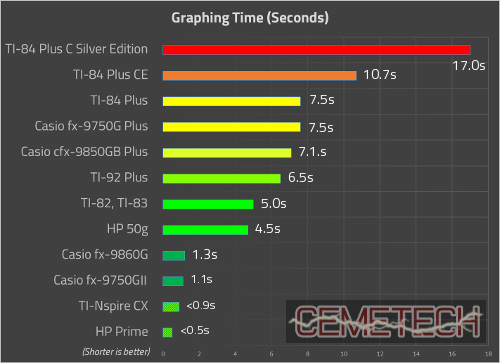 Yeah I saw the TI-Planet graphing speed comparison chart a few weeks ago and was shocked to see the two Casio calculators being much faster than the Z80/ez80 calculators. Not only that but they rivals the Nspire.

It stands in contrast to their BASIC languages speed, which is atrocious on Casio models considering the fact they run on 58 MHz SH4 processors (or 118 MHz in the case of the much slower ClassPad II).


One thing to note, though, is that the newer TI-84 Plus OSes, as well as the color models, detects asymptotes by default. I don't remember if it's still possible to disable that option, but with the option enabled graphing is much slower on the TI-84 Plus (over three times slower IIRC). Do we know if other models detect asymtotes?

Whoa. I wonder where the Ti-83 Plus is on this chart?
I am not a serious gamer. I am also a cordcutter and a stinge.
*mike drop*
*hides*

DJ: I can't say I keep up with their news posts, any imagery here is stuff that Kerm made, along with my video that I recorded. Did the whole thing on a whim when I saw the facebook post from Casio. :p

tifreak8x wrote:
DJ: I can't say I keep up with their news posts, any imagery here is stuff that Kerm made, along with my video that I recorded. Did the whole thing on a whim when I saw the facebook post from Casio. :p
Yeah, this was an independent project; I'm afraid I too don't really keep up with what they post, other than what they're kind enough to cross-post here. tifreak8x showed me this and his work, and I added the intro/conclusion and the chart.

Looks like I'm getting about 5.6 seconds on my 83+, although that's with low batteries.

Edit: And about 7.7-7.8 seconds of actual plot time on my HP 200LX. It can only plot one function at a time, so I calculated only the time it was performing the actual plot, not time navigating the menus to get back to the second function and plot it.

Enjoy a terrible quality video filmed with my phone in poor lighting.

I just redid the test above on a TI-84 Plus CE with asymptotes turned OFF and I got about 2.5 seconds.

I have no clue how to disable asymptote detection on a regular TI-84 Plus, other than downgrading to an older OS.

I did the same test, with and without asymptotes, and the results were similar. Without, it was just under 2.5 seconds, but with asymptotes on, I got 9 seconds.
↑
Quote

Is casio fx-cg 10/20 (peizm) scoring well on the above? By the way i recall there is a stup option controlling how fast graphs are drawn and by default it is set to slow normally in case someone wants to do comparisons for graphs. Sorry if i missed something above due to busyness
Pokémon+/Lock Add-In: Prizm Password Protection
Message Add-In for Prizm/Language Add-In Template
G-PLUS & G-CLOCK: OS statusbar & G-SHOCK watch
↑
Quote

amazonka wrote:
Is casio fx-cg 10/20 (peizm) scoring well on the above? By the way i recall there is a stup option controlling how fast graphs are drawn and by default it is set to slow normally in case someone wants to do comparisons for graphs. Sorry if i missed something above due to busyness
tifreak8x wrote:
Note that I would have included the Casio Prizm, but for some reason my keyboard is no longer responding and I'm unsure what could be the cause.
If you or another Prizm owner can perform the test, that would be helpful!

Wow, this is some really interesting stuff! I too was quite surprised to see how low the ti models scored compared to other models and decided to whip out some calculators and try some myself. Indeed for the models I do own, these numbers seem pretty accurate.
However I think asymptote detection might be the culprit here...
With asymptote detection on, I was getting about 16.5 seconds on my CSE, but off, I was getting about 4.2 seconds. That's about 4 times faster... Which would rank the 82-83s in the same range as the fx-9860G and the fx-9750GII.
Also, I think it's a bit unfair to compare a color model with a monochrome model when displaying stuff because the color model has so much more work to do (there are 76800 pixels on the CE\CSE, while there are 6144 on the 84 plus\SE)
I'd be interested to see how the ti-80 performs given it's sad little processor, if anyone has one, don't hesitate to post your results

EDIT: The ti-84 plus CE with asymptotes off and wait states reduced to 6: 1.9 seconds
↑
Quote

I have ti ce models and a few casio prizms so will do the comparison when i get some spare time soon
Pokémon+/Lock Add-In: Prizm Password Protection
Message Add-In for Prizm/Language Add-In Template
G-PLUS & G-CLOCK: OS statusbar & G-SHOCK watch
↑
Quote

Casio fx-cg takes fraction of a second on an emulator, definitely less than 0.5 seconds.

I will repeat the test on real casio hardware and on the french version of ti ce model (have not unpacked my new golden version yet) and report back
Pokémon+/Lock Add-In: Prizm Password Protection
Message Add-In for Prizm/Language Add-In Template
G-PLUS & G-CLOCK: OS statusbar & G-SHOCK watch
↑
Quote

Also the speed setting I mentioned before seems to exist in dynamic graphs setup but not in the graphs program used for the above test. And the default setting is normal. From manual i can see that the same setting can be changed to high in program setting too so for the sake of this testing and general knowledge i wonder if someone could send me a casio basic program setting this setting y=drawspeed to high and drawing the above to charts as one program so that i can repeat the test again... Or guide me how such a program is written as I don't have any experience with this in basic please
Pokémon+/Lock Add-In: Prizm Password Protection
Message Add-In for Prizm/Language Add-In Template
G-PLUS & G-CLOCK: OS statusbar & G-SHOCK watch
↑
Quote

The Casio can graph at an almost instantaneous speed when overclocked enough.

Also given the fast cpu graphing could in theory be almost instant without overclocking. Kerm managed to do 3d graphing faster than Casio did 2d graphing.
↑
Quote

One thing to note is that this graph does not take into account resolution. For example although the ti-84+ takes less time to graph than the newer color ti-84s it does not mean that it is programmed better or has a faster CPU. Instead the newer ti-84s just have a lot more pixels to graph on. Should the time values be divided by the number of horizontal pixels each calculator did?
↑
Quote

The TI-84+CE would be competitive with the Casio calculator if TI hadn't screwed up the internal bus so badly. 9 wait-states-per-byte for every read from flash really murders the TI-84+CE's performance, reducing the effective clock speed from 48 MHz to less than 8 MHz (and only that much if you're doing a lot of RAM reads/writes). TI gave the TI-84+CE lots of RAM, but with CPU throughput so thoroughly eviscerated, it's hard to take full advantage of the RAM, since you end up wanting to use it all for caching computation results or data from flash.
↑
Quote

I've always wondered... why does TI have so many waitstates on its calculators? Does it deliberately want to slow the calc down?
CSE obituary

https://www.cemetech.net/forum/viewtopic.php?p=251760#251760
https://img.ourl.ca/
↑
Quote
Register to Join the Conversation
Have your own thoughts to add to this or any other topic? Want to ask a question, offer a suggestion, share your own programs and projects, upload a file to the file archives, get help with calculator and computer programming, or simply chat with like-minded coders and tech and calculator enthusiasts via the site-wide AJAX SAX widget? Registration for a free Cemetech account only takes a minute.