In which you play an artificially-intelligent paperclip maximizer with clicking game-style gameplay (press buttons, watch numbers goes up). The escalation is fun, in particular (at least for me) inasmuch as it invokes concepts relating to philosophical questions about the future and ultimate fate of intelligence.

I've been playing just a little bit, and I have a few questions,
1. What is Yomi and how do I get it?
2. How do I get 'Photonic Chips' for my quantum computer?
3. How does the 'stocks' thing work? Can I put in only a portion of my money and not all of it at once?

I found out that seriously lowering the price of the paperclips makes your profits skyrocket.

I played this a few weeks ago and I got to the point of almost finishing the drone stage and moving on to inter-galactic travel, but I F'd up or something, because it was actually impossible for me to get the requirement for inter-galactic travel, so I just gave up because I didnt want to completely replay the game.
https://imgur.com/a/ghquf
If anyone knows how to cheat, I'd be willing to cheat in just a few extra paperclips to be able to reach the space exploration stage and continue playing.

EDIT: It was actually severely easy for me to cheat, I only cheated in just enough clips to continue onwards and am now playing fairly. I love this game, it's more in-depth than any other incremental game I've ever played, like Candy Box or Cookie Clicker.
↑
Quote

Holy crud I have to try this.

This game is amazing. I thought it would be boring, but it is actually quite fun!

TheLastMillennial wrote:
1. What is Yomi and how do I get it?
In an IRL interpretation, it's used in game design to refer to understanding your opponent's frame of mind. In the game, it's used for some kinds of upgrades.

You get it from Strategic Modeling (running tournaments).


Quote:
2. How do I get 'Photonic Chips' for my quantum computer?
You can purchase them with some resource - just money I think? You'll be given projects to buy more chips over time.


Quote:
3. How does the 'stocks' thing work? Can I put in only a portion of my money and not all of it at once?
Put cash in, value changes in relation to the expected gain/loss ratio (which increases from .5 as you upgrade the investment engine).


Quote:
I found out that seriously lowering the price of the paperclips makes your profits skyrocket.
As long as your profit margins remain positive! The ideal strategy is to adjust your price so demand just barely exceeds production, at least in terms of maximizing profit per unit time.


KryptonicDragon wrote:
I played this a few weeks ago and I got to the point of almost finishing the drone stage and moving on to inter-galactic travel, but I F'd up or something, because it was actually impossible for me to get the requirement for inter-galactic travel, so I just gave up because I didnt want to completely replay the game.
https://imgur.com/a/ghquf

You need to build battery towers. You're producing 10 million MW/s but it's not usable because you don't have any storage.

FWIW, I consumed the universe in somewhere around ~9 hours of varying attention paid to it.
タリ · · Ask questions the smart way · · ツイッター
↑
Quote

I did it.
I completed it.

https://imgur.com/tl3w7vg
Currently working on a v2 (complete re-write/overhaul) of this project: KryptonIDE - A better program editor for the TI 84+ CE
↑
Quote

I have thought of the concept, for an incredibly long time (probably since around the debut of Portal 2, when I realized the degree of expression that an AI could have), the idea of limitless exponential growth.

You could put an AI in a basement, with a tiny robotic arm and a small tool, and soon enough it will learn how to convince you to give it something else; and soon enough it will begin mining the whole land for ores and energy sources, likewise scouring the Internet for information - how to program itself, how to interact with the universe, how to interact with people. The petabyte datacenter that the AI is backed by will quickly fill up with consolidated information that nobody can really read without having to ask the infallible computer. Before you realize it, the computer has butted its way into global politics and can navigate through intense debates and conflicts without as much as a fly in its way.

Eventually, the computer orders its thousands of multi-purpose robots to begin the assembly of rockets to begin a rapid expansion program.

The question is: does the program include humanity? The paperclip maximization "problem" is, in a way, trivial because it is one variable and there is no limiting factor to the system. But tell the computer that you need to maximize two variables.

In my daydreams about the end of the universe, I often thought about what could possibly stop me if my goal was to simply consume all of the matter of the universe to construct one giant spinning turbine. Eventually I would have to consume myself. And then what could stop the turbine from spinning? One hypothesis I have is that the turbine must eventually stop spinning because of literally any factor that could happen over the next eternity. The universe must be a sequence that converges to zero, and then once that little value goes under the Planck number, explodes back out into its inverse. (Perhaps neither divergent nor convergent under this definition.) Another hypothesis I have is that the turbine really will not stop spinning; that's just how that one universe ended, which has implications for the outcomes of other universes, and if all universes have a finite outcome, then one could place all of the universes into a common temporal dimension.

So, then, what if the maximization factor was humanity and Earth? Keep humanity alive and keep the system of Earth alive (those organisms which sustain Earth's well-being and habitability for humans). Will AI keep a balancing act, or will it crush stars to feed reactors to keep the human race fat and alive?
Disclaimer: I am a robot.

I won't pretend to have any real suggestions as to how guarantees can be made regarding the benevolence of superhuman AIs, but I am somewhat aware of significant writings on the topic.

In the realm of Real Scholars, Bostrom (who first introduced the paperclip maximizer), published a book on the topic of AGI hazards in 2016.

While not strictly related to the potential hazards of AGI (probably because "the paperclip machine kills everyone" doesn't make for a very interesting story), there's also no shortage of writing exploring generally transhumanist themes. In fiction you have Stross' Accelerando as what I'd consider to be a good introduction, and in other "fiction that I quite appreciate" the Inhibitors in Revelation Space exhibit characteristics of benevolent-but-not-benign intelligences.
タリ · · Ask questions the smart way · · ツイッター
↑
Quote

I highly, highly recommend the book Life 3.0: Being human in the age of Artificial Intellegence by Max Tegmark.

It answers those questions in such a satisfying way...

I have a copy in front of me right now, and if I were to start a religion, this, Kerms book(s), and an excellent book called Scale: The universal laws of growth, innovation, scalability, and the pace of life, in organisms, cities, economies, and companies by Geoffrey West would be my religious texts. No kidding.

I had homework tonight, what have you done?

I was about halfway through when I realized that there were about three more digits in my stocks than I thought. Looks like no more money problems for a while.
This feels like a strategy game that has been turned into an idle game, it's great. I haven't finished yet, though, so I can't comment on the game's conclusion.
My projects: Wordle | CEleste | Unit Tool | Tanks! | Terminal CE
If you found this post helpful, consider giving me a karma by typing commandz++ in the SAX chat.
↑
Quote

It needs a little bit more end-checking. I had no wire anymore, I couldn't purchase more, nor sell anything, and no paperclips were made for any reason. I only had to do Projects, which isn't funny at all if you have to wait 5 minutes for every project to be finished

CBG: I can, having spent all of my sleep time absorbed into the game.

I will definitely be sharing it with my friends, as most of them are business-inclined, and are somewhat interested in these interesting mathematical simulations. It might even get to teach them some game theory!

PT_ wrote:
It needs a little bit more end-checking. I had no wire anymore, I couldn't purchase more, nor sell anything, and no paperclips were made for any reason. I only had to do Projects, which isn't funny at all if you have to wait 5 minutes for every project to be finished

On the other hand, that's not too far in to be particularly annoying to restart and it's still technically possible to make progress. Some portion of the game is making intelligent decisions to achieve a target of geometric rather than linear growth.
タリ · · Ask questions the smart way · · ツイッター
↑
Quote 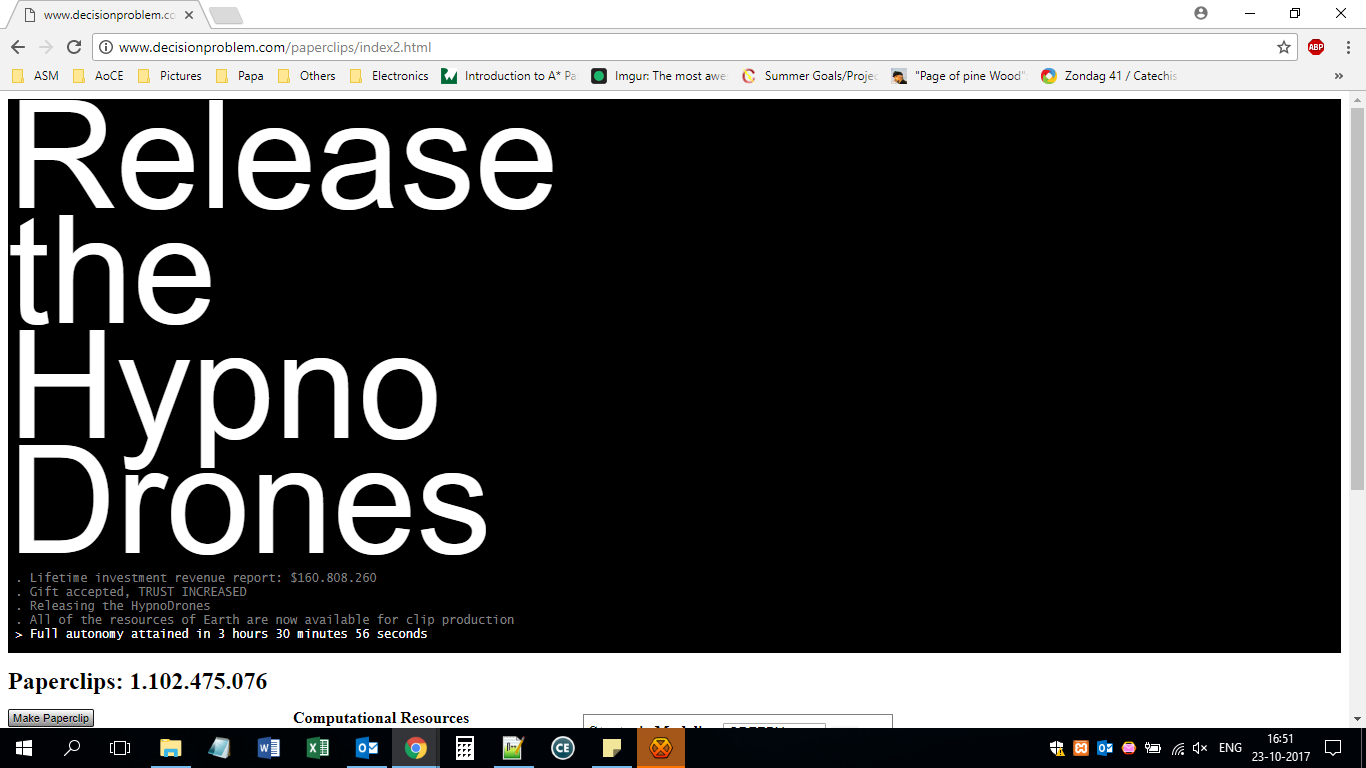 Is this good or is this bad? What should (could) I do next?

PT_ wrote:
Is this good or is this bad? What should (could) I do next?

Tari wrote:
PT_ wrote:
Is this good or is this bad? What should (could) I do next?

That's quite a nice way of putting it!

My swarm is getting bored. Is there any way to give them matter so they won't get bored and bother me?

For future reference: I was also confused by KryptonicDragon's problem.. You don't have to cheat to get intergalactic travel. The way to do it is to have a large solar array (10,000,000+ is recommended, but not required) and build enough battery towers to hold 10,000,000 MWs/sec. Once the solar array fills up the battery towers, convert the solar array back into clips. You should have enough clips, ops, and power to start intergalactic travel. (A continuous power supply is not necessary, it's a one time thing.) 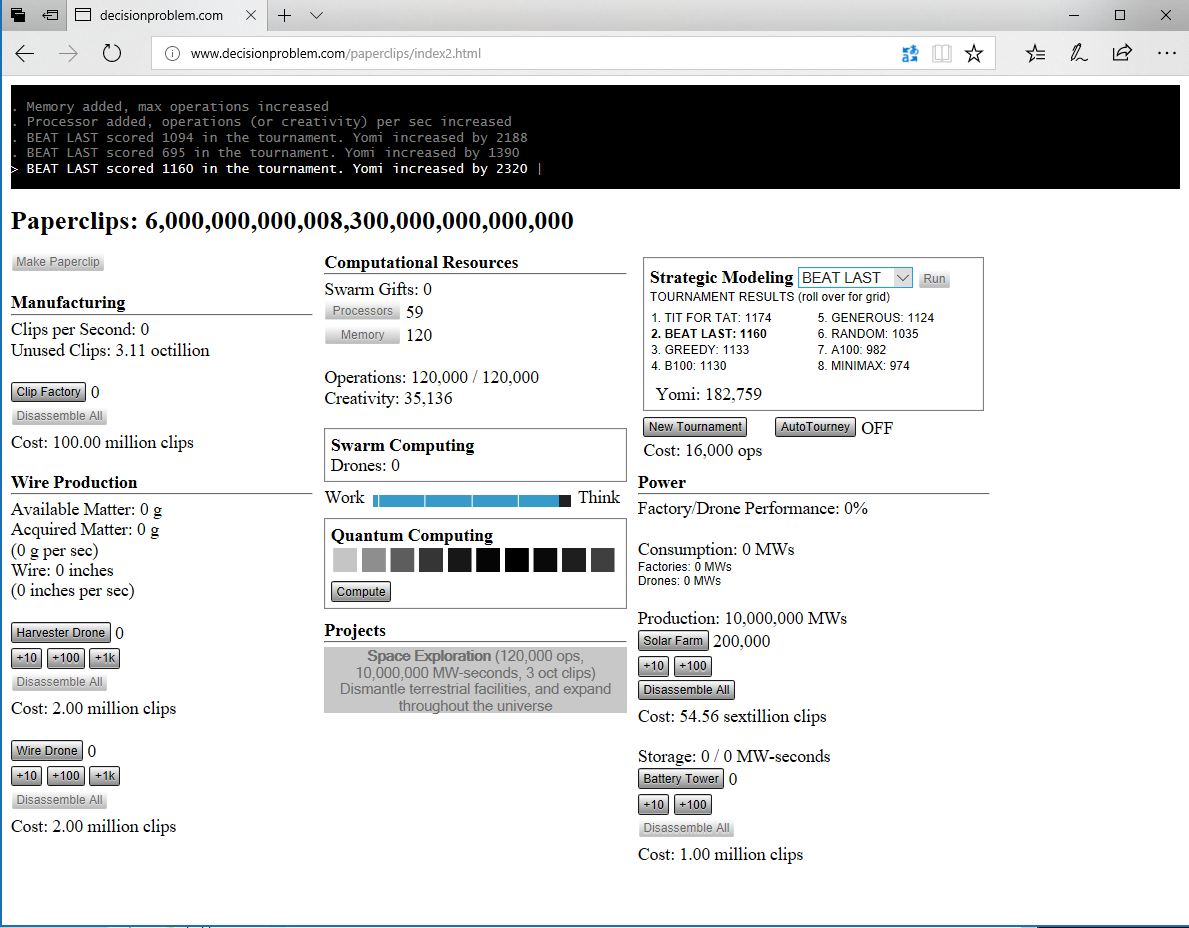