A transliterator on the CE
» Forum > Your Projects
Post new topic    Reply to topic
»
» View previous topic :: View next topic

A new project I started with is a transliterator on the CE.
It will allow you to easily transliterate stuff on a calculator!
As for now I am planning to implement the following alphabets:


Is there any other alphabet I should use?

I do not really have screenshots yet, though I have a screenshot of me trying to see if the font stuff works:

I was thinking you could also do the various elven dialects from LotR, but then realized that it's translating letter-by-letter, not word-by-word, so it is essentially just a new alphabet.

I have currently implemented Elder Futhark and Ogham.
For Elder Futhark I might be going to add an improvement for making the transliterations better, namely replacing 'th' for a thorn at least.
But, there is a problem.

Once the string reaches a certain length fontlibc does not display the last characters and for longer strings the characters just get messed up...

Here it only shows "well this is a"

Here it only shows "abcdefghijklm"

Does anyone know how to fix this?

The source code is on Github.
How would a dragon using a calculator look like?

Have you checked the size of your window? Fontlib won't draw characters outside it.

That is not what happens here. I did not set a window though. But I did enable autowrap.
And it seems not to be that it does not draw, seeing the squares that don't belong there in the lower screenshot.
So I do not think that is it? I could try to see what happens if I define a window though.
How would a dragon using a calculator look like?

One thought: Could you also make a dwarven rune transliterator? I realize that that one s more phonetic-based than letter-based, but it still translates nicely.

I don't know about newer versions, but you can find a complete explanation of how the various languages in LotR work in the back of Return of the King, in the appendices.
↑
Quote

darkwater4213 wrote:
One thought: Could you also make a dwarven rune transliterator? I realize that that one s more phonetic-based than letter-based, but it still translates nicely.

I could try to do that, but as you said, it seems to be a bit more phonetic-based. So I would have to see how much that is possible.
I have just been reading a bit on the several LoTR alphabets, but those seem to be a bit hard. Sometimes phonetics-based, but other times just written in a way that would be much harder to implement than something like Elder Futhark.
Though I think it is interesting to see if I can get a writing system by Tolkien working.

Currently I plan to implement further:

Proto-sinaitic and Nyctograph (Is that the correct name?)
Proto-Sinaitic:

And for some reason the string length problem seems to be kinda solved!
I was able to make the fonts less in size, so maybe that could have something to do with that now longer strings can be handled? Maybe?
Though now at a certain length the calculator just crashes... Does anyone know why that could be?
How would a dragon using a calculator look like?

When I woke up, I suddenly remembered why the problem with the length of the string was solved. I do not know why I forgot, but I actually had changed something...
And I actually changed that, hoping that it would solve the problem. So why did I forget that I had done that?

The thing that fixed it was printing the transliterated string character by character, instead of the whole string at once.

EDIT: I actually did not change this, I only thought of it. So I remembered wrongly. The transliterated string is still shown at once...

The new crashing problem I mentioned? I used a string to copy the inputted string in, because for Futhark the string has to be modified. It will not work though to copy a string of 65 characters into a string with a fixed length of 50...
How would a dragon using a calculator look like?

TransliteratorCE is almost finished!
I just have to do some stuff, but there already is a working version!
I uploaded a beta version in my Discord server.
If you want, you can also build it or grab the binaries from Github!
https://github.com/PrivacyDragon/TransliteratorCE
How would a dragon using a calculator look like?

TransliteratorCE is finished!
The first release has just been published!
YaY! 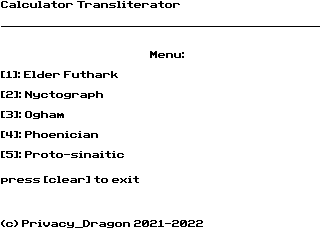 [s]now you just need some spit-and-polish stuffs[/s]
↑
Quote
Register to Join the Conversation
Have your own thoughts to add to this or any other topic? Want to ask a question, offer a suggestion, share your own programs and projects, upload a file to the file archives, get help with calculator and computer programming, or simply chat with like-minded coders and tech and calculator enthusiasts via the site-wide AJAX SAX widget? Registration for a free Cemetech account only takes a minute.