Is it possible for the C Libs to be installed right away? If this is already a thing, then it doesn't work for me

Awesome project, BTW. I am using it for a C project (what else?), and it works seamlessly, other than that. I hope to see more awesome stuff like this in the future.
Try out Village, a cool Esolang!
Some, but not all, things and people care about not who you are, but what you can do. they may seem odd, but are good judges of your skill and ability. 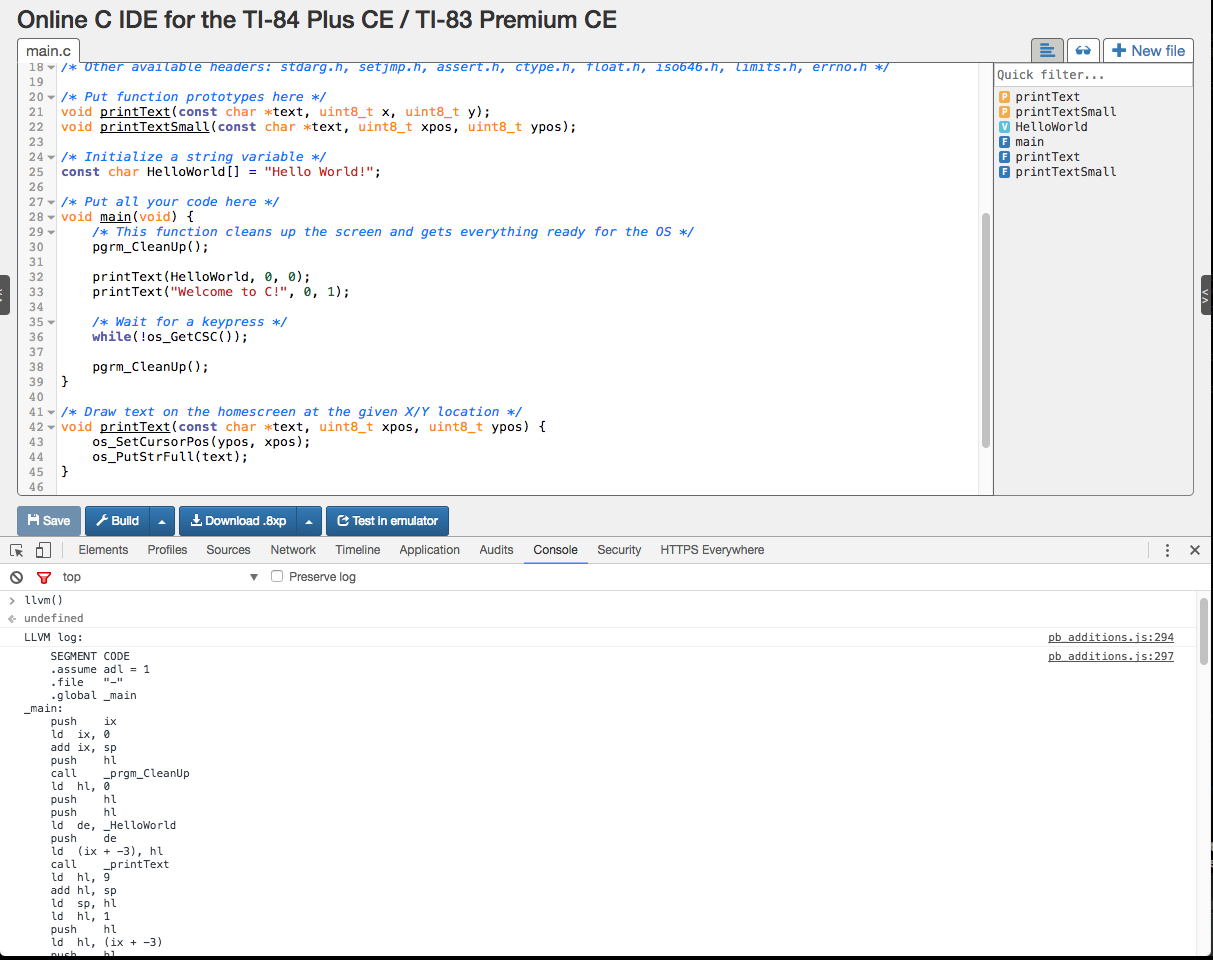 It will obviously be better eventually, but for now it's good enough to try/debug stuff

LLVM view updated, now diffing with ZDS (left, and llvm on the right)
Note that clang gets called with -Oz for now.
(Also, yes that means you can write some C++17 for you 84+CE, because why not...) 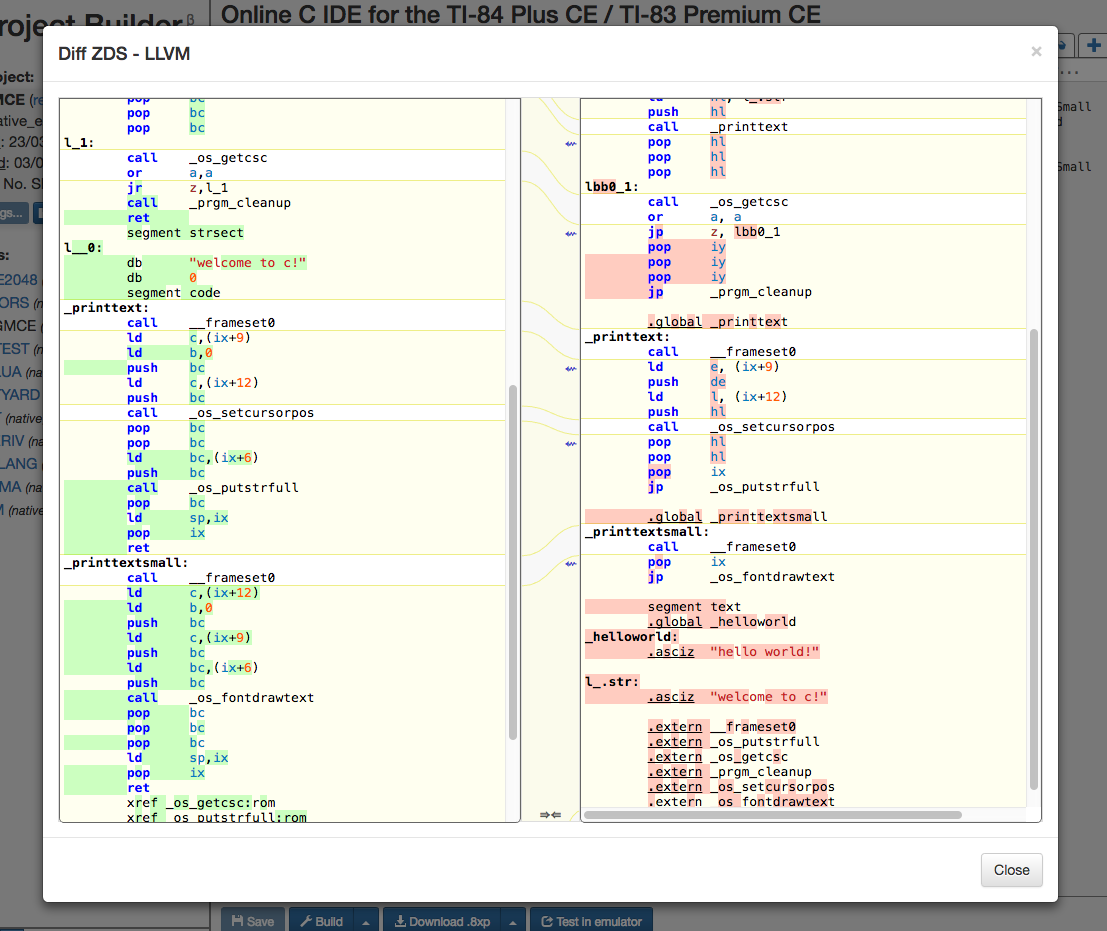 Impressive work, especially at jacobly! I look forward to him announcing his work with LLVM more.

Over the past few days, I've been able to work on some Project Builder upgrades (and I want to particularly thank jacobly for the time he spent with me debugging some things

(Will be available soon on the public github repo)


Skip to 27:55. The guy was basically proving that const leads to some pretty insane optimizations on the C64, but it also highlights that high-level programming doesn't necessarily mean that the compiled output will take more space.
Disclaimer: I am a robot.

Oh but I was and still am serious

Anyway "const" is indeed best practice, but C++17 (and 20 / experimental) brings a lot of really cool stuff as well (c++11 and 14 were also pretty cool, especially with better constexpr)

And yep, I have seen this video, it's pretty fun.
TI-Planet.org co-founder / co-admin
↑
Quote

What's that? C++ you say? LLVM-based building and not just asm-viewing? 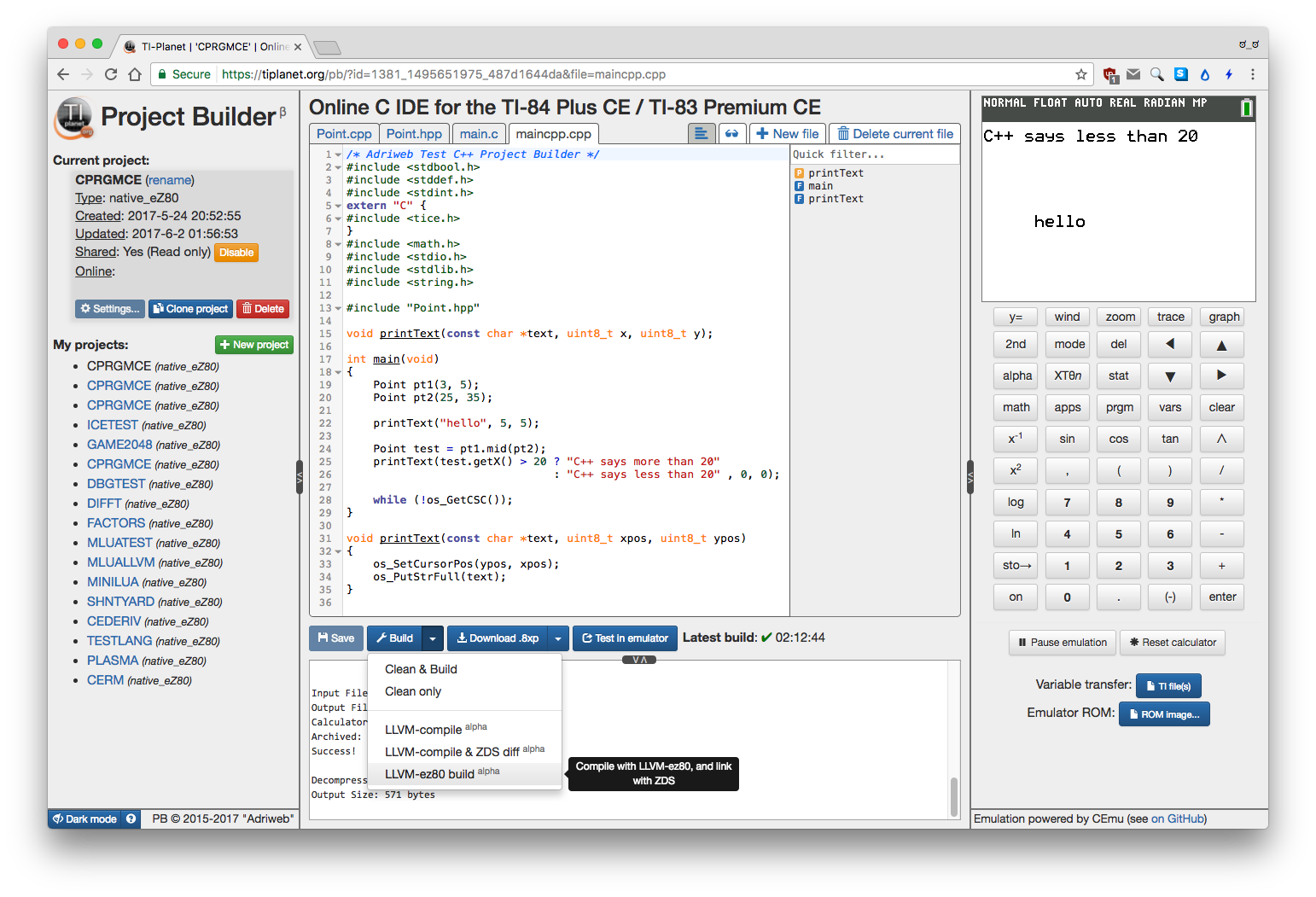 
Many improvements on ASM code edition:

And now with Autocompletion (fuzzy search) and definition peek from the SDK includes (standard, libs...):


My thanks to:
- Lionel Debroux who's started code-reviewing and suggested quite a few interesting things, mostly aimed towards a more reusable/portable PB. Everything isn't done yet, but we're getting there!
- Runer112 too in particular, for feedback, testing, sorting ideas+code
- Everyone else who's tried/used the PB and provided feedback

Among the numerous improvements from today: 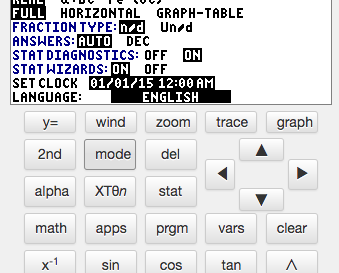 Thanks Adriweb! I love these changes, and as a regular user of PB, I have to say it's getting better and better. Great job, and keep it up!
CSE obituary

And don't hesitate to suggest any features!
I'll be implementing .zip import this weekend, along with a belated ProjectBackend class generification on the backend.

I've improved the linewidget display yesterday following a comment by Runer, and even though it's not yet optimal under certain conditions (blame CodeMirror and CSS weirdness), it's better than before.
TI-Planet.org co-founder / co-admin
↑
Quote

Some of the latest updates:

The few updates since last time:

There hasn't been many updates since last time (about a month ago, yep...), but : 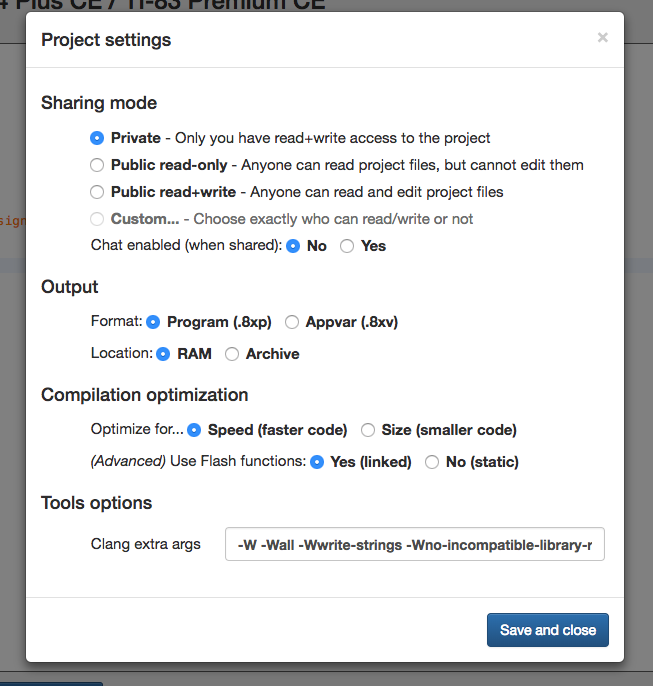 Between yesterday and today, I spent about a dozen hours on making the backend architecture of modules more generic, splitting in several layers what's specific and what's generic for the server-side processing things. I've also completed the DBHelper SQLite backend implementation (untested though!), if people are interested in it someday.

Anyway, it's becoming easier and easier to handle/add several modules in the Project Builder (even though I could still generify some more layers in the front-end, for instance a "front-end for a module using CodeMirror").

An overview of the general architecture according to PHPStorm, not showing fields/methods/etc. (we don't see what uses what, too bad

I finally did the rebase (well, I wrote a script to do it...) from the private repo to public repo, since early July.
There are only 2 files left not yet published, basically

(And thanks to those who contributed to some of those commits, directly or indirectly, especially Mateo, Jacobly, Runer112, Lionel.)
TI-Planet.org co-founder / co-admin
↑
Quote
Register to Join the Conversation
Have your own thoughts to add to this or any other topic? Want to ask a question, offer a suggestion, share your own programs and projects, upload a file to the file archives, get help with calculator and computer programming, or simply chat with like-minded coders and tech and calculator enthusiasts via the site-wide AJAX SAX widget? Registration for a free Cemetech account only takes a minute.