*** Because of my item sprites, the size of the program is already 18510 bytes. I was hoping maybe using compression on them would make a difference, but it ended up making the program bigger.


I would suggest optimizing the code and looking at the coding guideline here: https://github.com/CE-Programming/toolchain/blob/master/docs/static/coding-guidelines.rst.


I've done some optimization, but I could probably do some more to get it to follow the guidelines more closely. I did some today actually that took about a kb off of the size. But I'm also continuing to add more data to the program, so the size just gets bigger as I go along.


epsilon5 wrote:
Forgot to post earlier so doing it now that Alvajoy reminded me that this thread is active...

Looking great, I think that the lure ideas are good, and I particularly like that sprite for "The Big One." I think that some gore is fine, given the subject matter of the game, so a horse carcass would be fine in my opinion. For a medium lure, maybe you could use some cooked meat that's larger than a steak, like a cooked turkey or chicken.

I also wouldn't worry about the size quite yet, 18510 bytes seems pretty reasonable given all of the sprites and (I assume) the large amount of AI logic that the program probably has. If you really care about that, compression would be a good way to get it down, but I doubt size is much of a consideration for most people. And this is nothing compared to something like Jetpack Joyride CE or any of my own games...

Looking forward to that shop update!


In regard to your comment about the size, I've elected to just not worry about it for now.

Looking at the size of Jetpack Joyride, I don't feel I have anything to worry about anymore.

As for your approval of my horse idea, I appreciate it! And I did decide to go with a turkey, although I chose to make it raw like the steak. If you guys think it would be better cooked, I wouldn't be opposed to revisiting the icon.


darkwater4213 wrote:
For the shop: perhaps have a system similar to Roguelight: points translate to money, which can be spent in a shop hat opens once you die, but money doesn't roll over every round; unspent money is lost. High scores are still saved. How does this sound?


That's actually a really cool idea! Unfortunately, I've already got the "timer" system implemented, so for now, I'm gonna stick with that. However, this could be good as a different game mode.

tr1p1ea wrote:
One question, since you receive a 'FAIL' when you die ... is it actually possible to win and receive a different message, or is failure the only possible outcome?


Hmm, I hadn't thought about that.

I'm not sure what it would look like to "win" in a zombie apocalypse. If any of you guys had any thoughts on that, I'm open to suggestions.


Now that all that is out of the way, I've made a bit of progress since my last post. I've added the turkey and the horse as "medium" and "large" lures. The shop is more finished, but I might adjust some things as I keep working on this project.

Here's a screenshot of just the store: 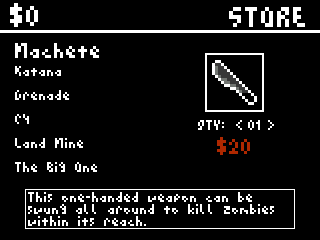 For the store, I loosely based it on the store in squidgetx's Zombie Gun game for the 83+/84+, and I hope that's okay. I tried to pause on each of the descriptions for the implemented objects; I think they're readable enough but let me know what you guys think!

I've also started the inventory screen, but so far, I haven't touched the functionality of it yet besides displaying what you own. I may even move the boxes around, so I guess we'll see. 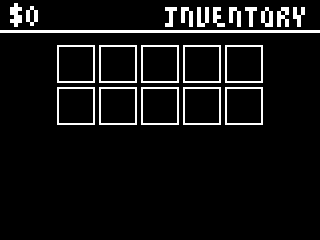 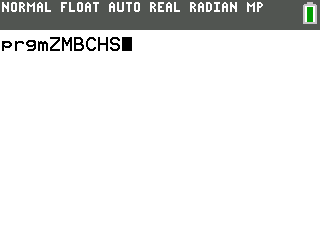 As you can see, I gave myself $500 to start with, but that's just to show the shop/objects in action.

Also, I haven't implemented changing the equipped item, but when you buy something new in the store, it automatically places the item at the zero index on your inventory as equipped. Also, there's a bug I didn't realize was there until I was recording this screenshot, but apparently the zombies are stuck even after the lure runs out. Should be an easy fix tho.

I actually opted to do the rotating sprites for the zombies, and I think it looks pretty good! Sometimes they face the wrong direction, and I'm not sure why. But zombies are don't have much in terms of higher brain function anyways, so I'm not too worried. I was dealing with some slowdown with the old implementation (just drawing a few red and green rectangles) after about 20 zombies were on the screen at once, so I tested with the sprites, and it helped; although I'm not sure at what point it will slow down now, so I'll have to do some further testing.

On the game screen, the changes you'll see are that the timer is now formatted correctly, and there are three boxes in the upper right corner! Those boxes are just to show what is currently equipped as a weapon, armor, and boots. I plan on making those look better, perhaps with smaller versions of the icons. Also, in the bottom right corner of the screen is a "status update" feature. It's just for temporary messages to the player.

I think that's about it until I make more progress! If you guys have any other questions/suggestions, feel free to post here, and I'll try to respond even if I don't have any massive updates to share.