These last few days, Critor and I (well, I was just helping him a bit) have been working on a game for the TI-83 Premium CE / TI-84 Plus CE, "Mandragore", which is in fact originally a game from the 80s for computers like the C64 / ZX Spectrum / CPC etc.
In this game, you have to find your way around the map collecting things and visiting places.

Here's a Youtube Video of it in action (though not the latest version).

For better performance, the game uses the CE's LCD 8bpp mode and redraws only needed tiles. As you can see, there is no scrolling-lag as there would have been if made in pure-Basic (There is however the "standard" OS repeat-keys delay, which we'll probably fix later on).
What's "special" about this game is that it is, as far as we know, the first "big" thing written in C for the CE (not counting TI apps)

(We've had headaches working around ZDS' C language (≈ C89) compiler limitations...)
For that, Critor and I used TI-Planet's upcoming online C compiler (this link is somewhat outdated, updated info have since been posted here and there), and its real-time multi-user editing feature proved immensely useful

Anwyay, it's available to download here : http://ti-pla.net/a328137
Of course, it's open-source so anyone can learn from it

I was born in the late 90s, so I haven't heard much about a game like this. But it seems that it's my type of game.

Are you planning to make the full clone of the game, or just a basic port? And how are battles going to work based on the C routines you have worked on?
↑
Quote

I was born in the late 90s, so I haven't heard much about a game like this. But it seems that it's my type of game.

Are you planning to make the full clone of the game, or just a basic port? And how are battles going to work based on the C routines you have worked on?

This is actually the whole thing I believe, lol. I don't know if critor plans to add the other stuff from the original game (in which you can enter villages and dungeons, but those parts are in 3D).
For now, it's pretty simple indeed, but at least shows what's possible to do, and with what performance. Adding actual game features should be easy enough and not decrease perf.
You're welcome to fork the project and start from there with your own ideas

Regarding the C routines, screen-related things are easy enough since you just have to write to the VRAM, which represents what's going to be displayed on the LCD. For this game, double-buffering was not needed, it is fast enough already.


Ivoah wrote:
Looks nice! Glad to see some more projects being made for the CE after Mateo's leaving.

Thanks! And indeed - hopefully other people will too write some things in time.
It's a good thing Mateo released very useful things before leaving, it made some things used here possible

I'm not sure if I should create a new topic, but anyway...

Critor made a new game (which I find much more addicting

) based on yet another 80's game : "Androides". It's a platform game in which you have to collect things while avoiding the thing that chases you (you can temporarily destroy blocks to make it fall or set up traps etc.) 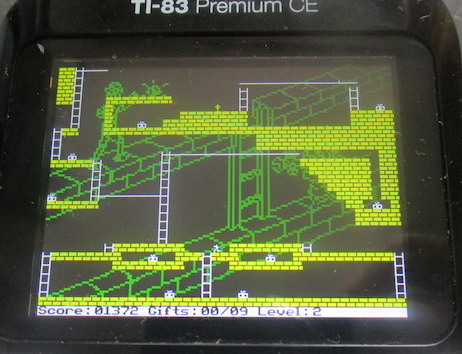 As you can see, you really have to pay attention and act quickly otherwise you'll get caught... (and to help in this direction, direct/continuous keypad scanning is used, not GetKey/CSC)
Also, the game had to be slowed down, it's way too fast otherwise

BTW, it's also made in C and is open-source.
"Fun" thing, testing it with Cesium revealed a "bug" in the shell (run indicator not hidden when reloading the shell), which since got fixed (v1.1.3).

Concerning Androides, has anyone beaten level 11? I cant figure it out.
↑
Quote
Register to Join the Conversation
Have your own thoughts to add to this or any other topic? Want to ask a question, offer a suggestion, share your own programs and projects, upload a file to the file archives, get help with calculator and computer programming, or simply chat with like-minded coders and tech and calculator enthusiasts via the site-wide AJAX SAX widget? Registration for a free Cemetech account only takes a minute.