Now I'm part of the elite of Cemetech

Second, less important (jk), I want to post about a new game I'm making in C: CurveFever CE. This is a port of the rather popular online game CurveFever, which I played a lot in the past, together with my brother. Just because of my 1337th post I wanted to release something new, or create a new game, or whatever, so this is the result: 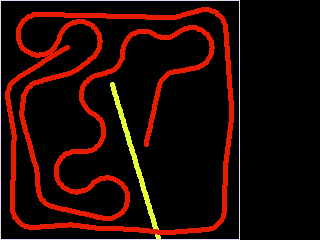 Basically, you have to control a 'snake', by holding down a left and a right key (you should be able to set the keys in a menu) to move through the field, and trying to survive as long as possible. You can block others if you move well enough, and in the future I will add powerups as well, to slow down others, or move them the other way around... There will be a score board at the right, which needs to be added as well.

My intention was to make it for 4 players, all at one calc (oh boy, that's gonna be fun), but I'm not sure if that's feasible, especially with such small field. In the far future I might even add linking, that you can play 1v1 at 2 calculators. I've added in a timer to make sure you have a constant FPS, I set that now at 30 FPS which should be enough.

Anyway, enjoy the screenshots I will post in the future and if you have questions, suggestions, comments, hate comments or you just like it, feel free to post it!

I kind of remember this game, it'll be neat to see it on a calculator! It also kind of reminds me of a 2D light-bike game.

Multiplayer would be really neat! Especially multicalc! (Multiplayer and multicalc at the same time?

) However, like you stated, I don't know if 4 players would be feasible with such a small screen.

TheLastMillennial wrote:
Multiplayer and multicalc at the same time?

You should try single player AND multicalc!

Anyways, congrats to PT_, our friendly neighborhood ICE wizard, on reaching this milestone, and creating this actually quite cool (albeit unfinished) game!
Try out Village, a cool Esolang!
Some, but not all, things and people care about not who you are, but what you can do. they may seem odd, but are good judges of your skill and ability.

I've added in random gaps, and the first part of checking if you hit another line. For now, you can just pass through your own line, but not through anothers:

Got some more things done; I've added powerups, for example, slow down the opponent(s), speed up, thicker line etc. They appear randomly and when you 'pick up' a powerup, it disappears. They don't work correctly, I gonna work on that.

Now pretty much every powerup is working, except the 'corners' one, where you turn with 90 degress if you press left or right.

(#fail at the end

Out of curiosity; how are you handling circle collision?
↑
Quote

This is amazing work, sir! It reminds me a little bit of one of my favorite graphing calculator games, Uncle Worm. I'm glad you were able to make something new and exciting for your 1337th post.

This is kinda cool to see, a new game being made! One thing I would change, though, is to make the gaps come on a timer, as that's how the original seems to do it.
↑
Quote
Register to Join the Conversation
Have your own thoughts to add to this or any other topic? Want to ask a question, offer a suggestion, share your own programs and projects, upload a file to the file archives, get help with calculator and computer programming, or simply chat with like-minded coders and tech and calculator enthusiasts via the site-wide AJAX SAX widget? Registration for a free Cemetech account only takes a minute.