Pixelmon is a mod for minecraft that sets you in the world of Pokemon, where you have to go around and gather materials so you can make Pokeballs to catch Pokemon. The best videos to describe, would be located here:

After seeing his videos on the game, I decided (after a year and a half of owning the game and only playing it for maybe an hour in all that time) that I finally had a reason to play the game!

I set out to learn how to play minecraft itself, because I had never done so, and after spending some time reading the wiki and watching through certain aspects of the videos again, I set out to play. I currently have an apricot farm: 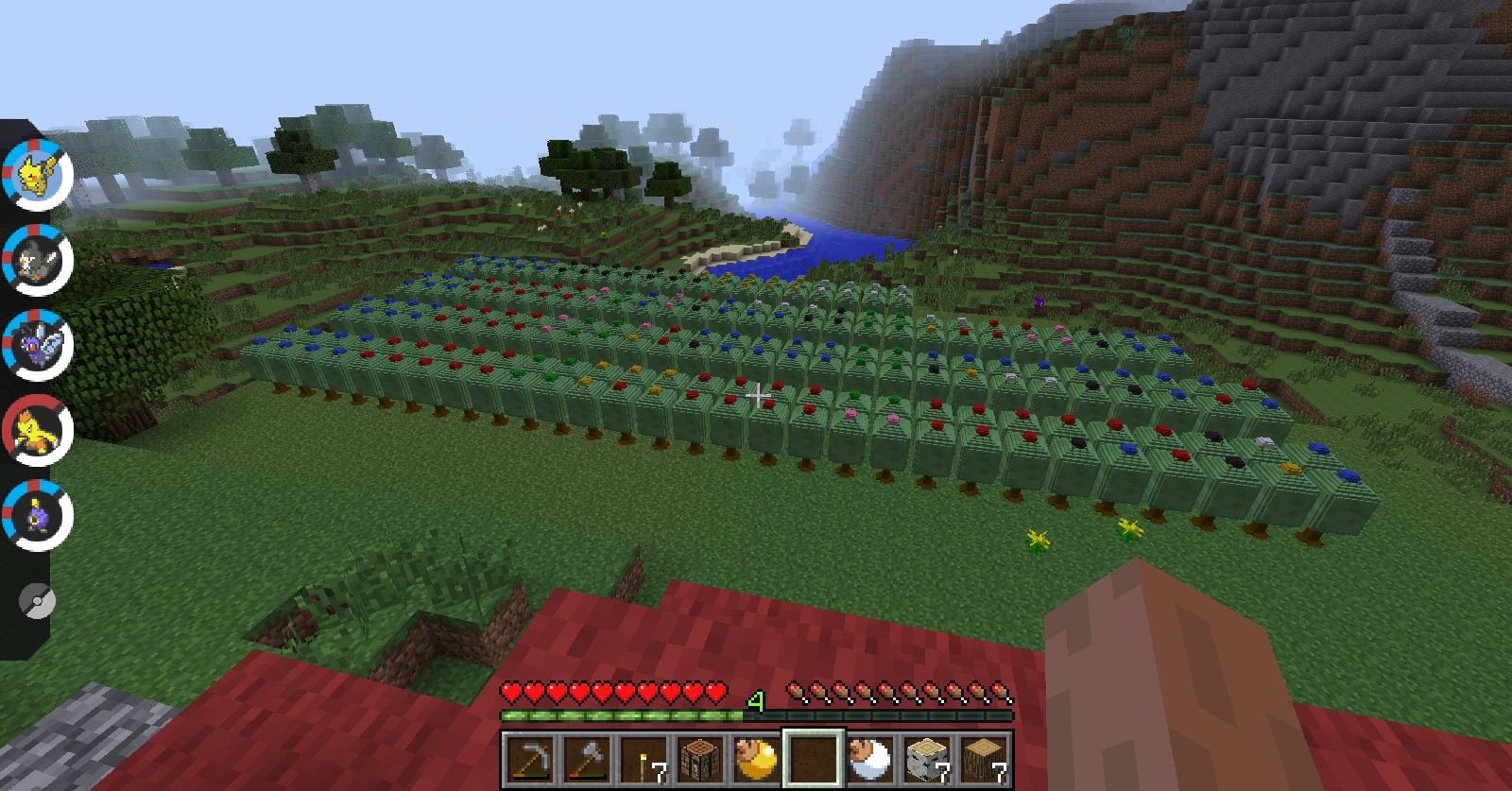 Not yet pictured is this massive canyon that I found to do some mining that I will eventually get back to. The game seems to feature premade Pokemon Centers where you can heal and store Pokemon, though I'm not sure if every map that is generated will contain them. I have found 6 so far on the map I'm playing on, which is just a single player map. I've made my base out of one of them.

You can also gather up the materials to build the heal unit and PC system. You can see more of what can be made, here: http://pixelmon.wikia.com/wiki/Crafting

In regards to my apricot farm, I plan on expanding it massively, but I need to do a bit of ground clearing before I can do that.

I'd love to convince the powers that be that such a server would be nice to set up, but that's just me wanting to have others to play with/against :p Also, I play with the difficulty set to Peaceful. I'm not really one to want all the various creatures of minecraft to show up and cause me to lose my progress. The Pokemon that come along and kick my butt is bad enough. :p But at least I don't die and lose all my stuff in the process.

I might post up more pictures as I have them, if there is any interest shown for this. 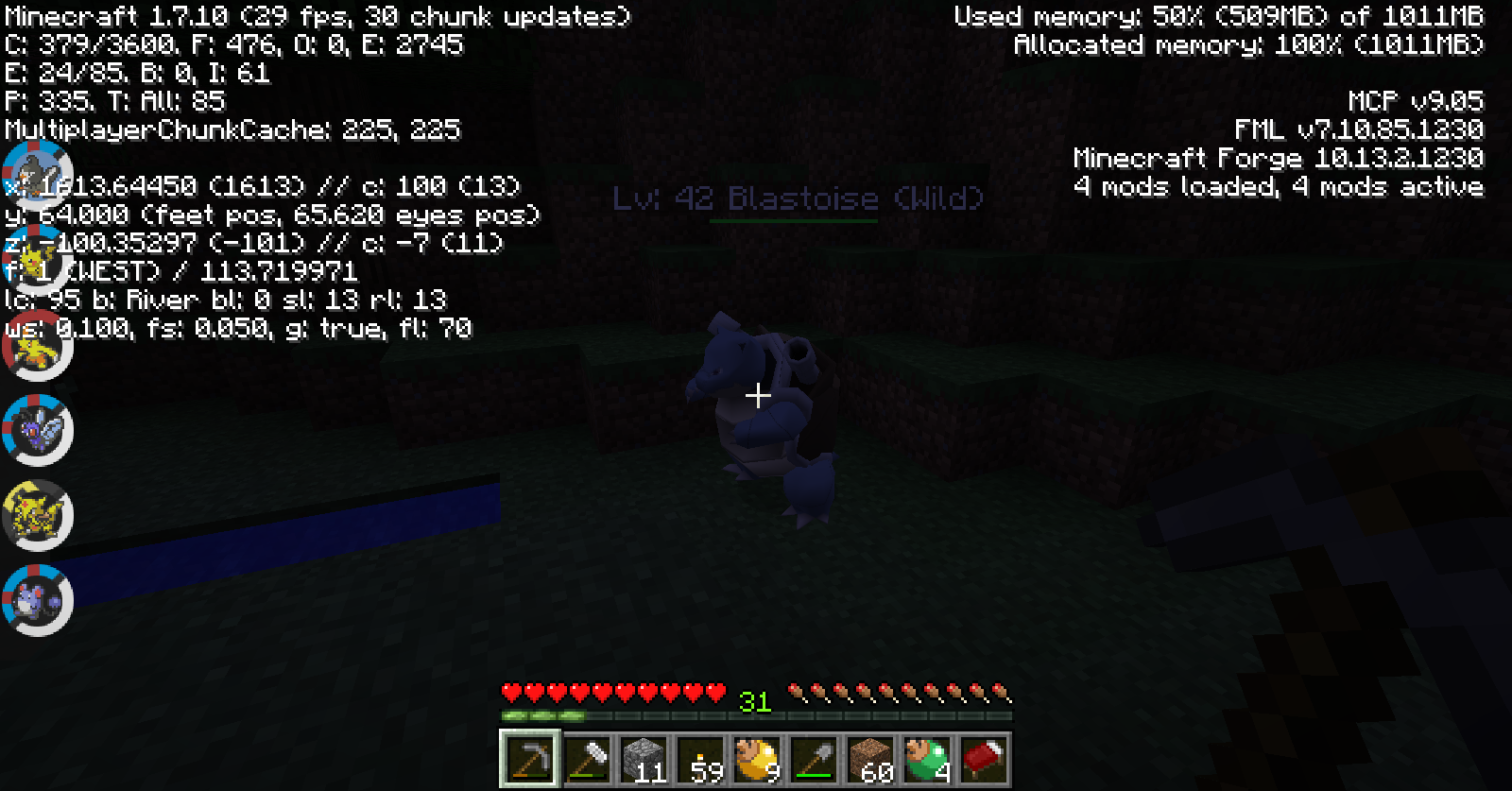 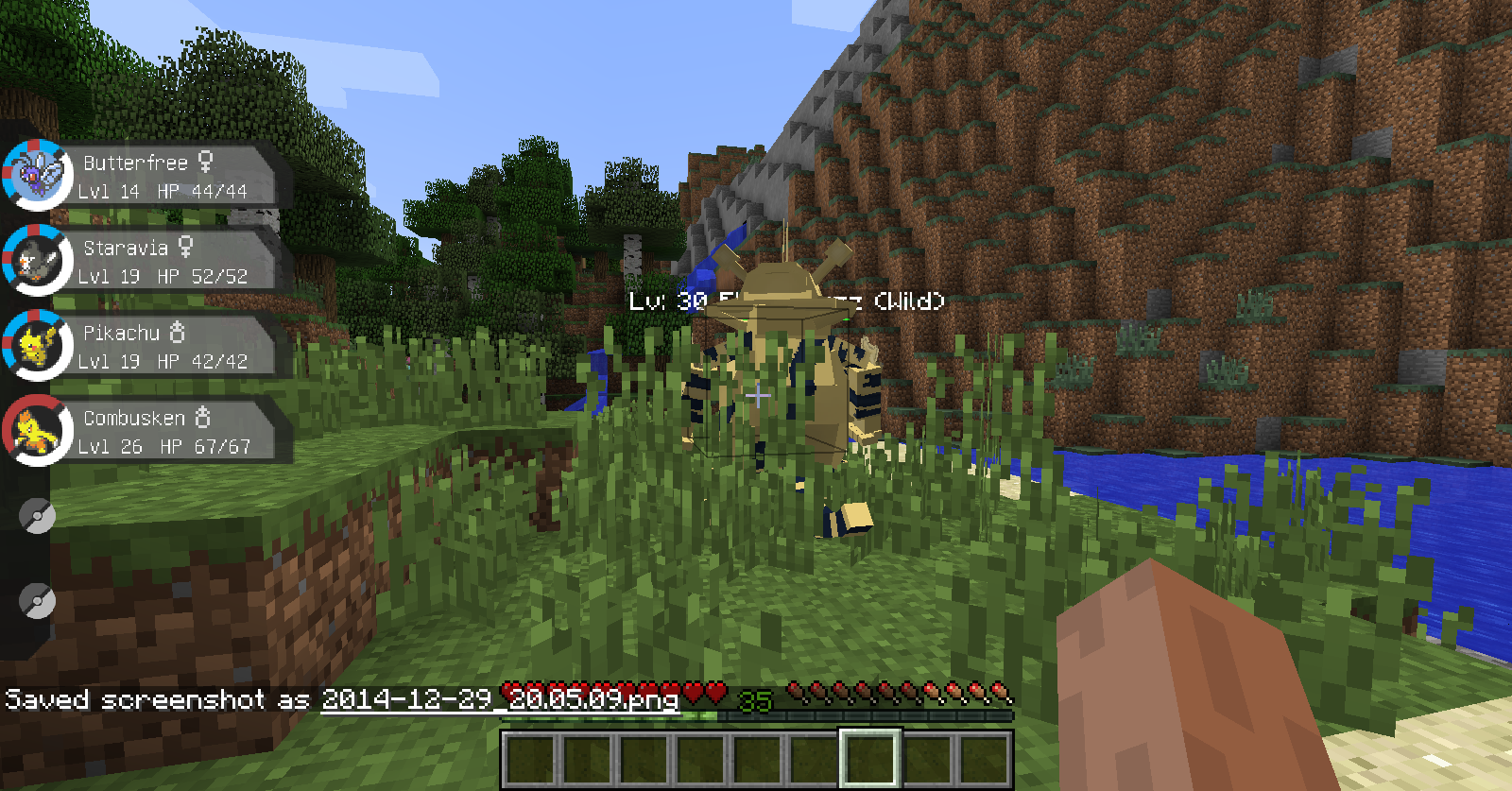 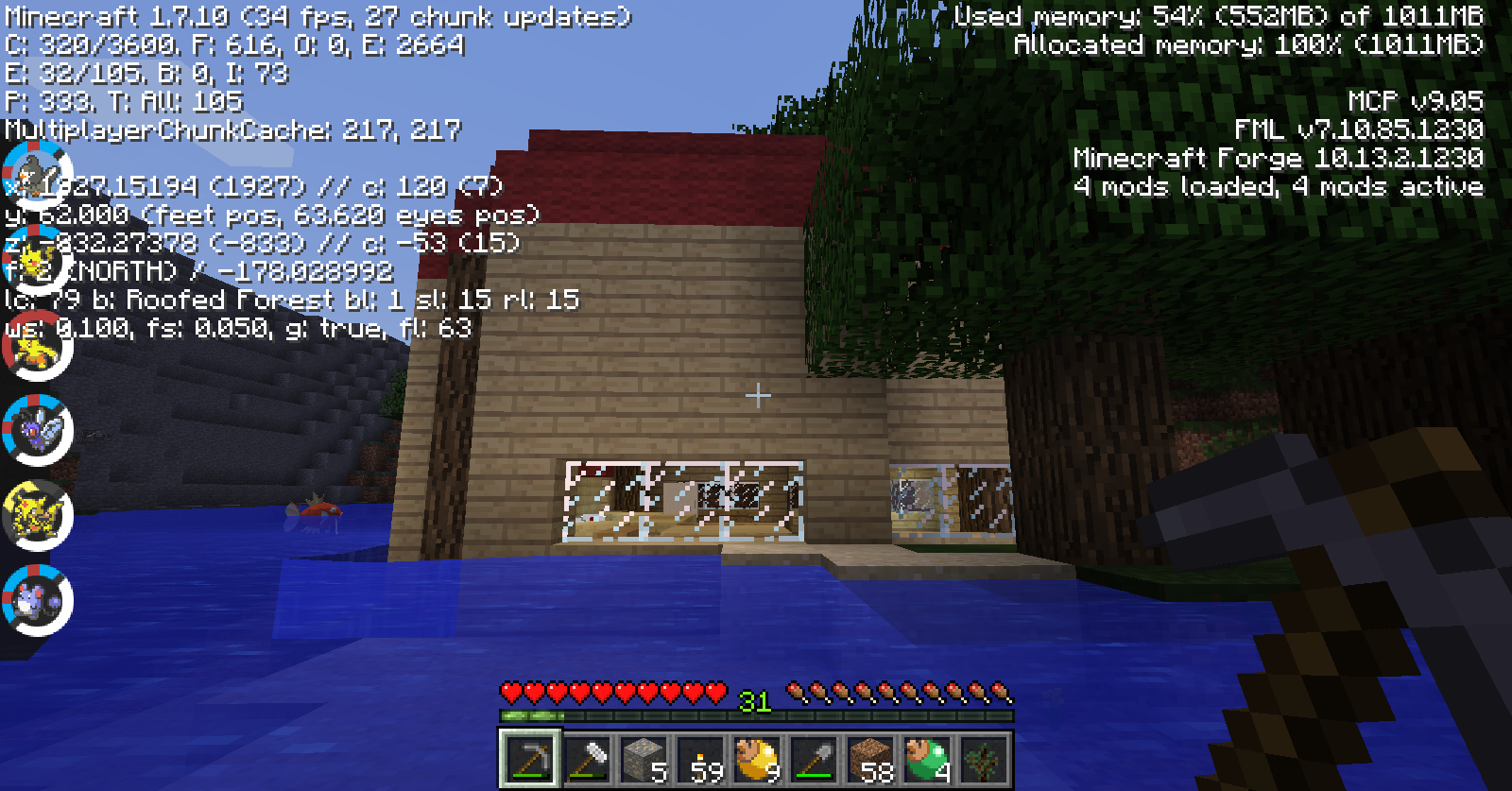 Hmm... I never thought about playing with that mod. It looks more fun than I thought it would be.

There are multiplayer servers here: http://pixelmonservers.com/

Yeah, there are, but that would defeat the purpose of Cemetech hosting a server for it, where we can control who can and can't do things. 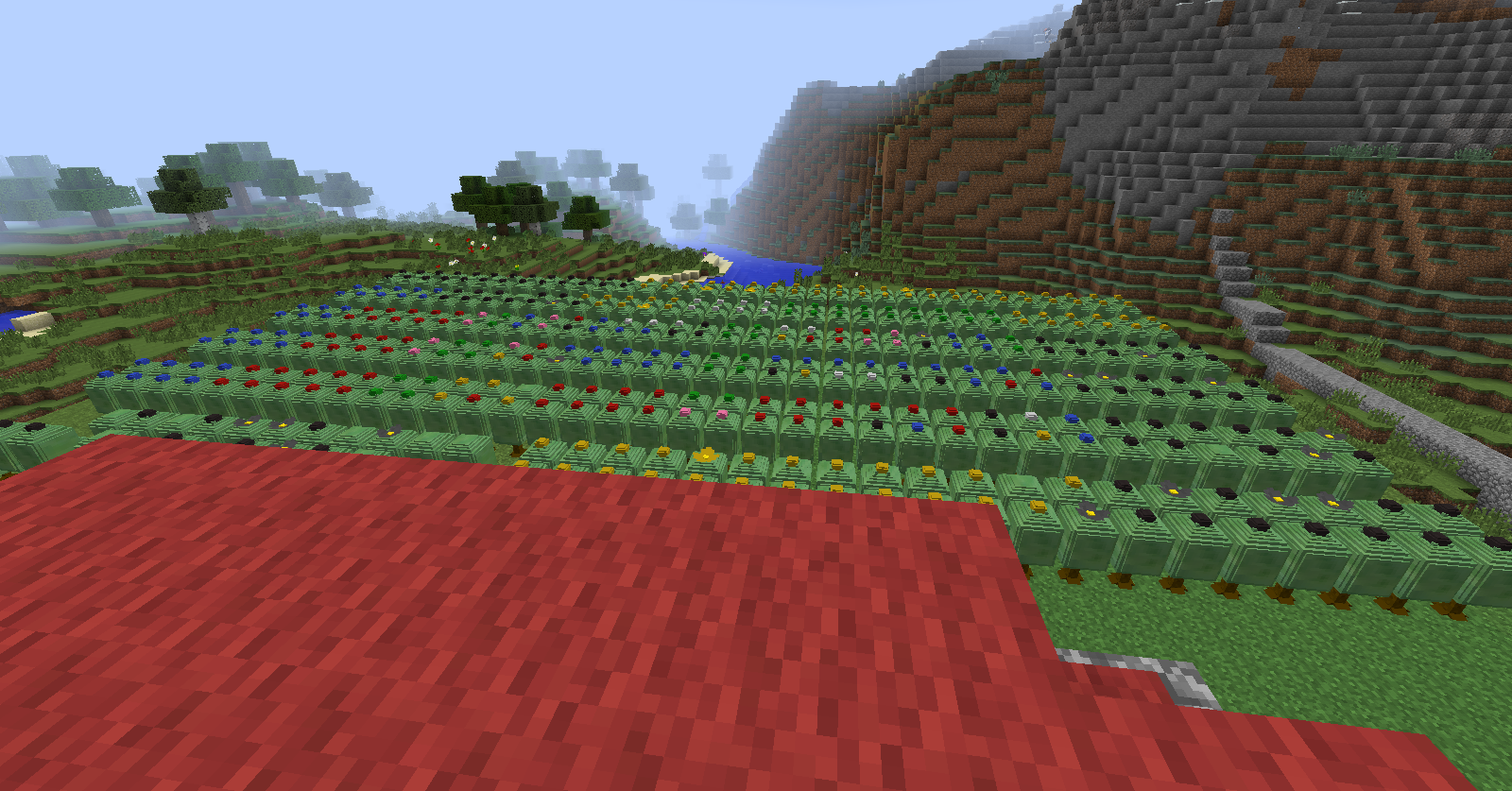 Apricot farm has been upgraded. Went mining, computer lagged and I ended up in lava, so lost a lot of ore. That kind of ticked me off :/ Ah well. Back at my base and getting ready for more pokemon catching. And see if I can find some more iron ore. :/
↑
Quote

So yesterday, I decided to go revisit a Pokemon center that I had found on one of my previous treks out into the world. 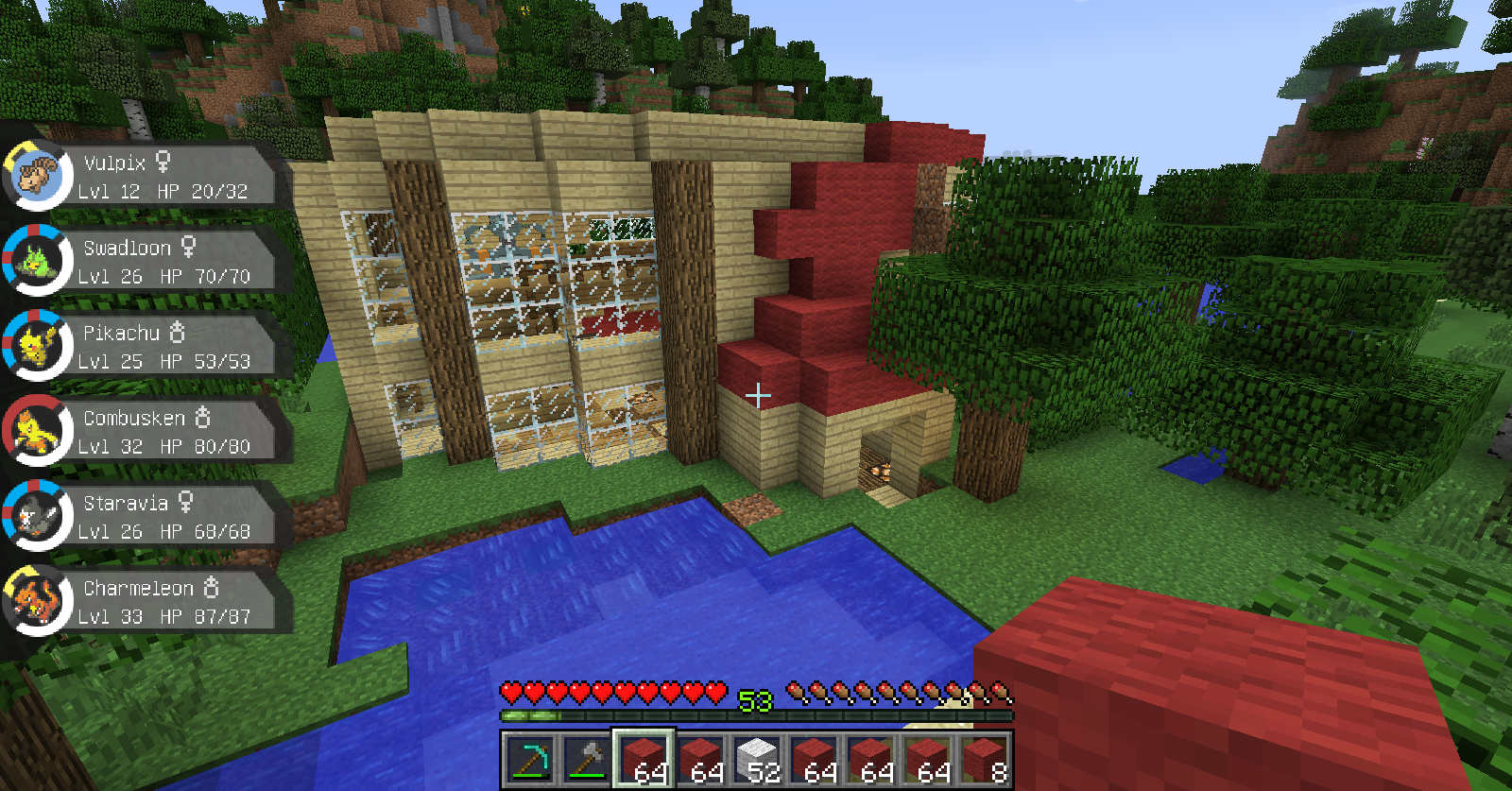 Funnily enough, the character could hold the entire building except for maybe 15 pieces of birch stairs, and the equipment that couldn't be taken down because it just hands out a little bit of iron. Loaded down, I decided to take my loot back to the base to get ready for construction. Problem was, I had to clear off to the side of the base I was already using: 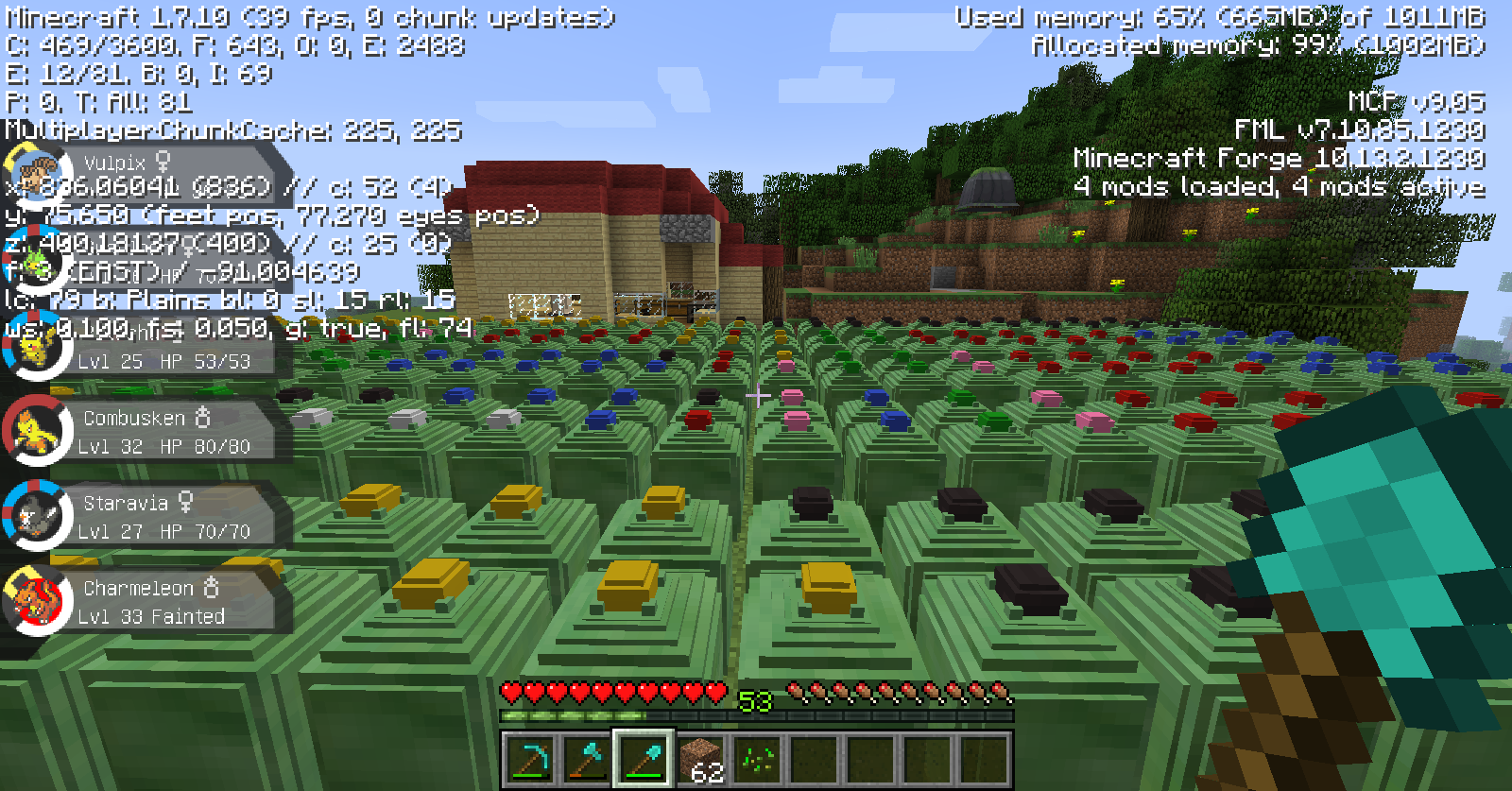 Clearing that all out took a good 45 minutes. Also had to fill in parts of my mine that was connected to the door of the base. After getting things cleared out, walls went up pretty quickly. 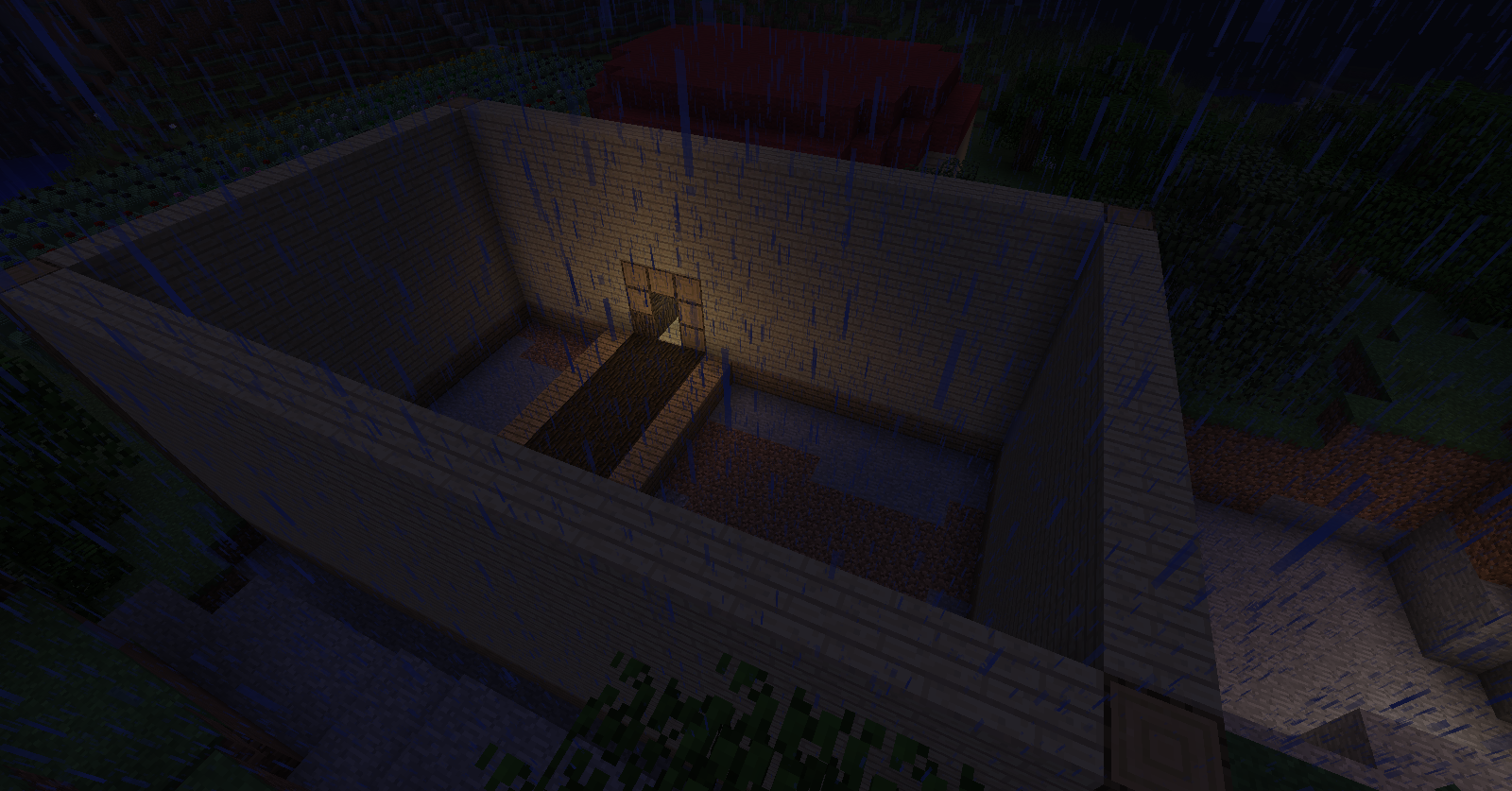 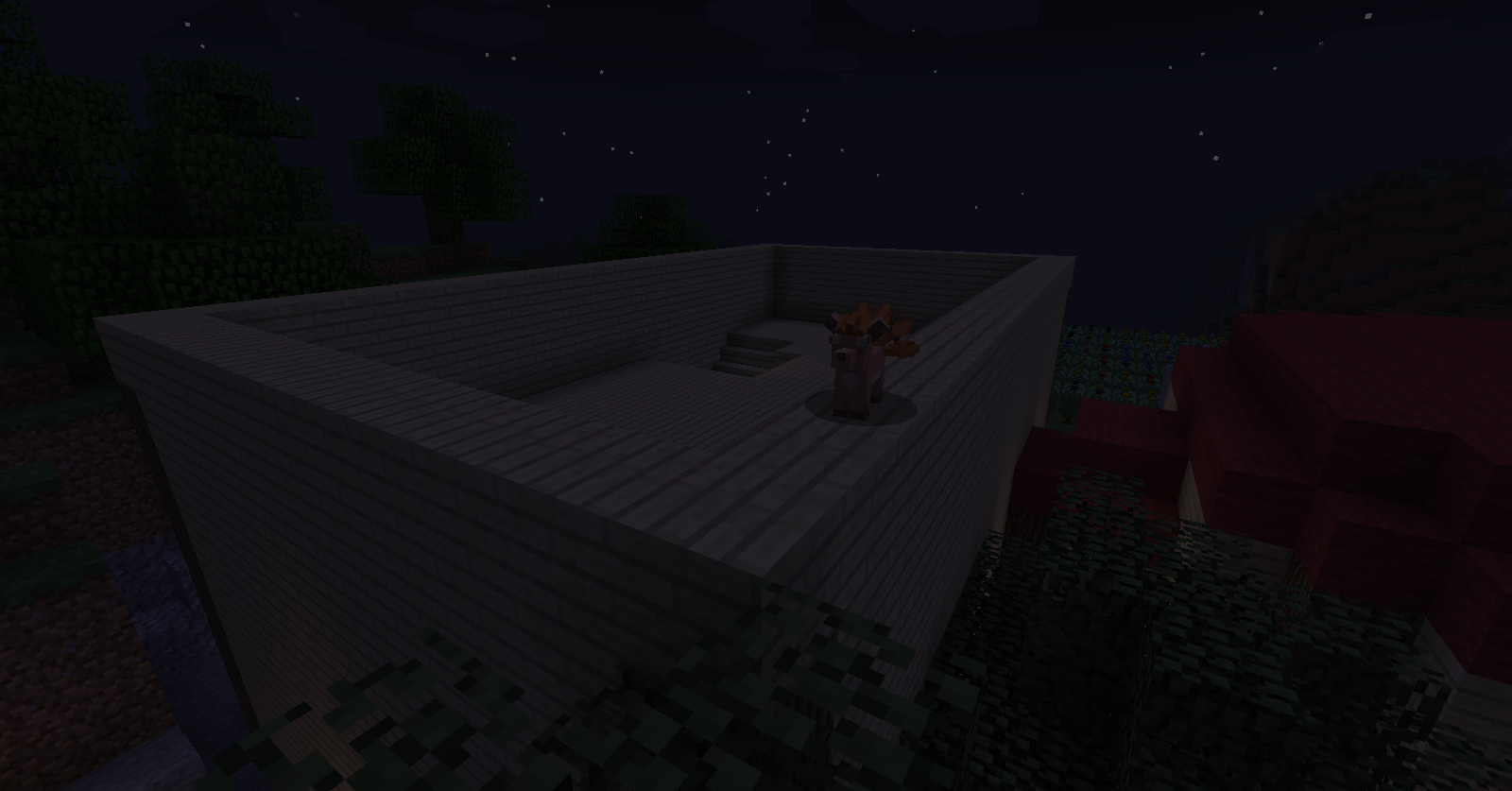 I built the second floor, then the stairs, and it seemingly turned out okay 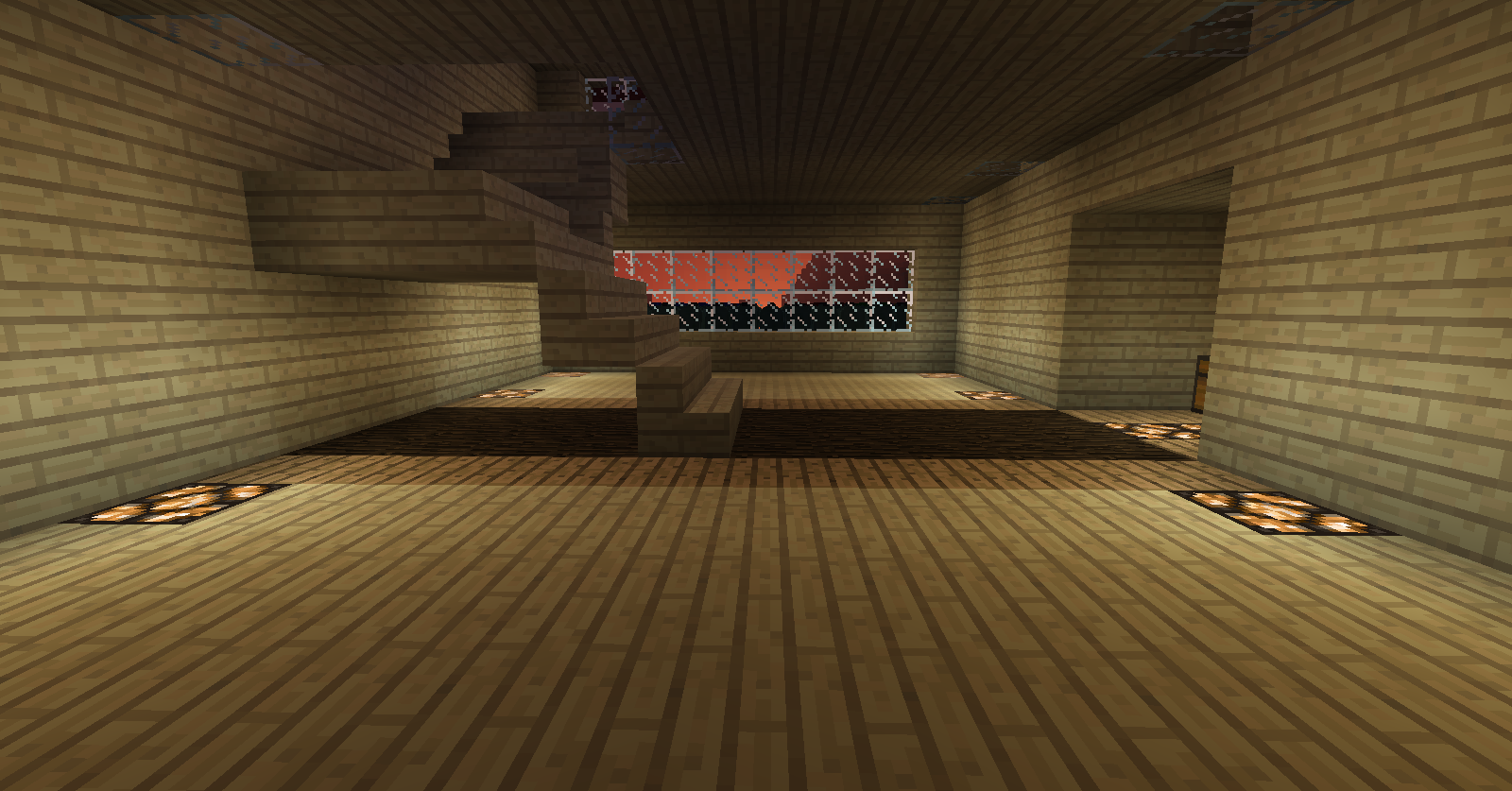 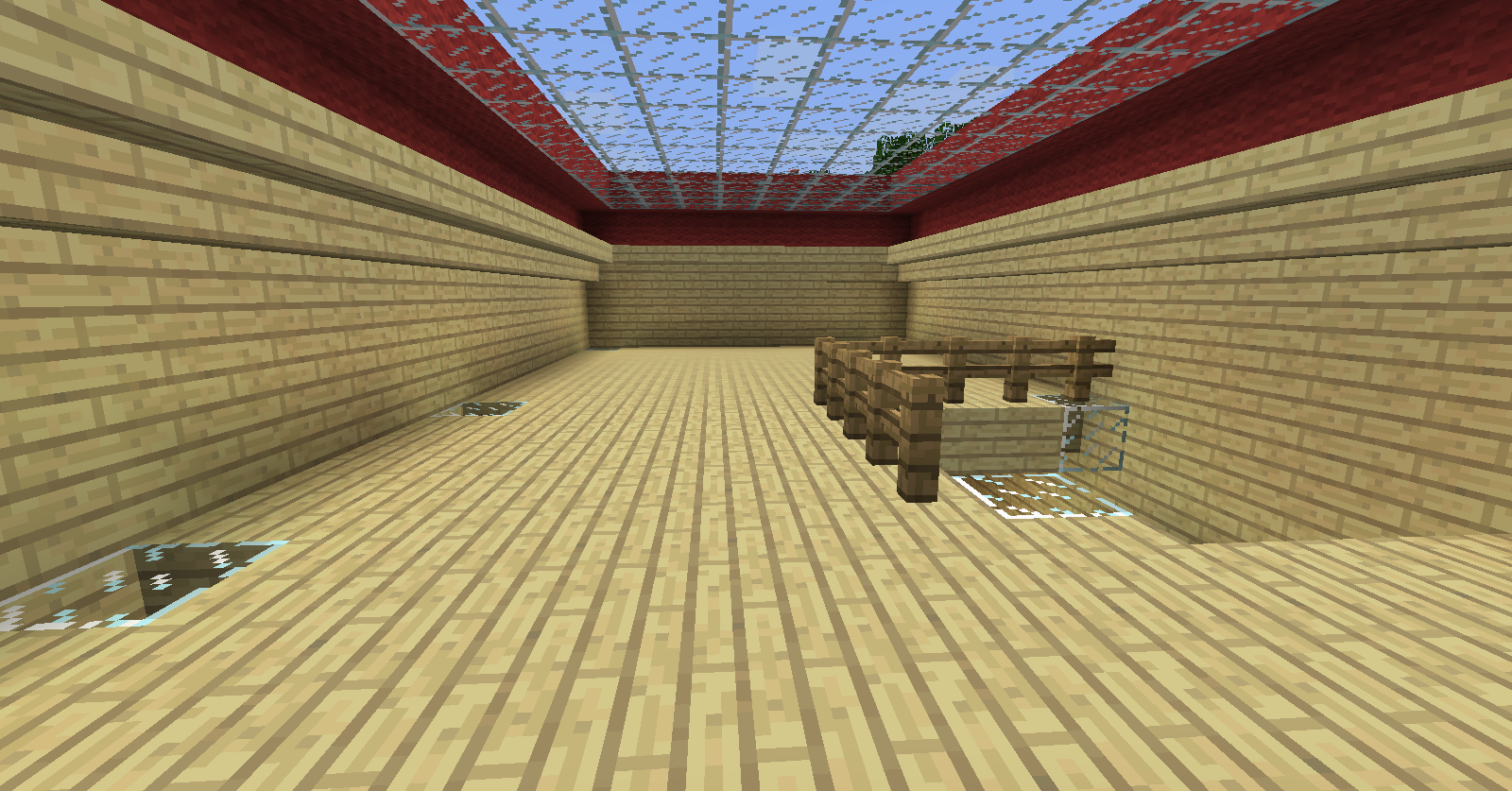 I decided on a glass roof to let in natural light during the day, and added glass blocks to the flooring of the second floor to let light in from the redstone lamps on the first floor. 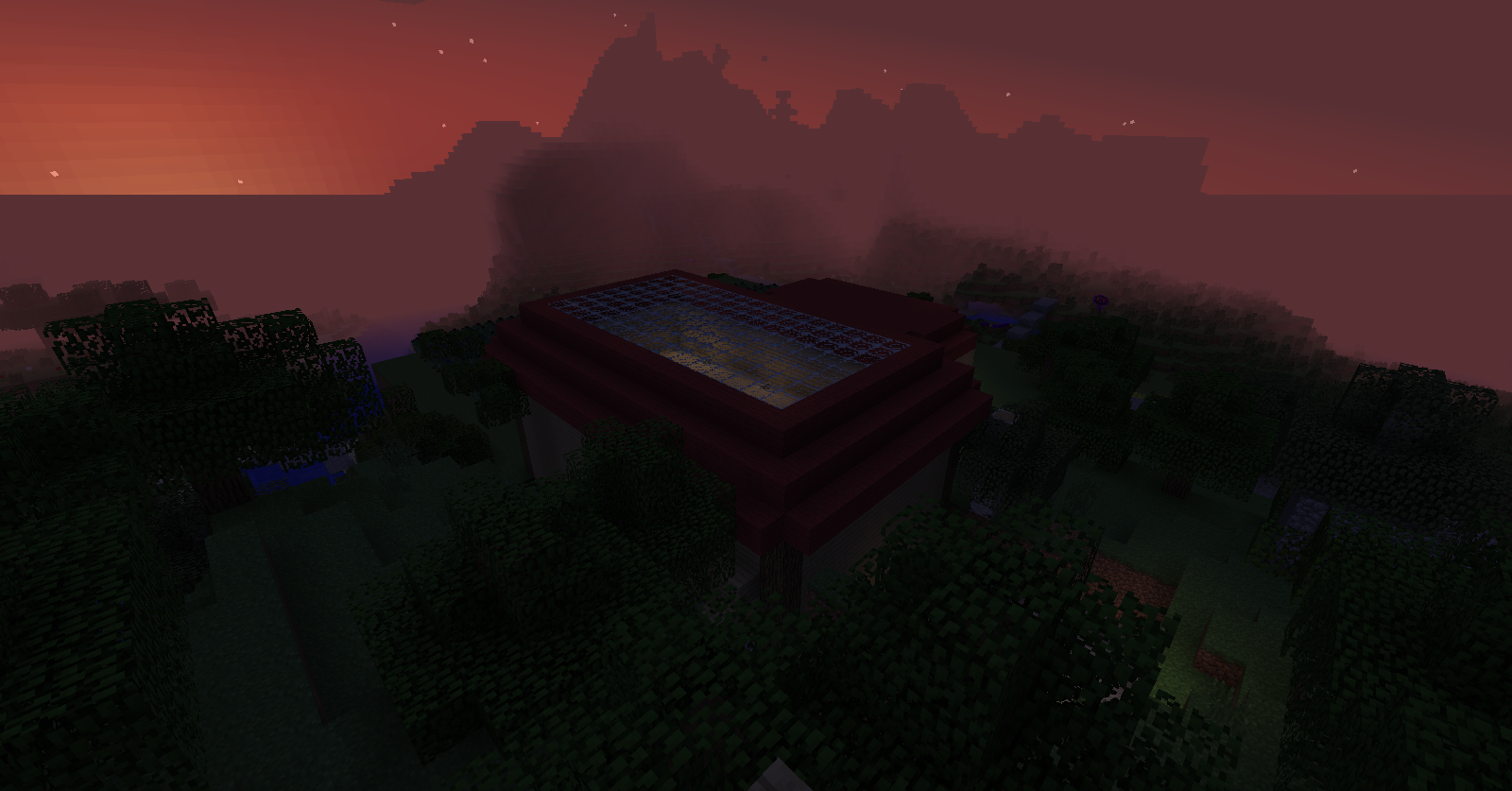 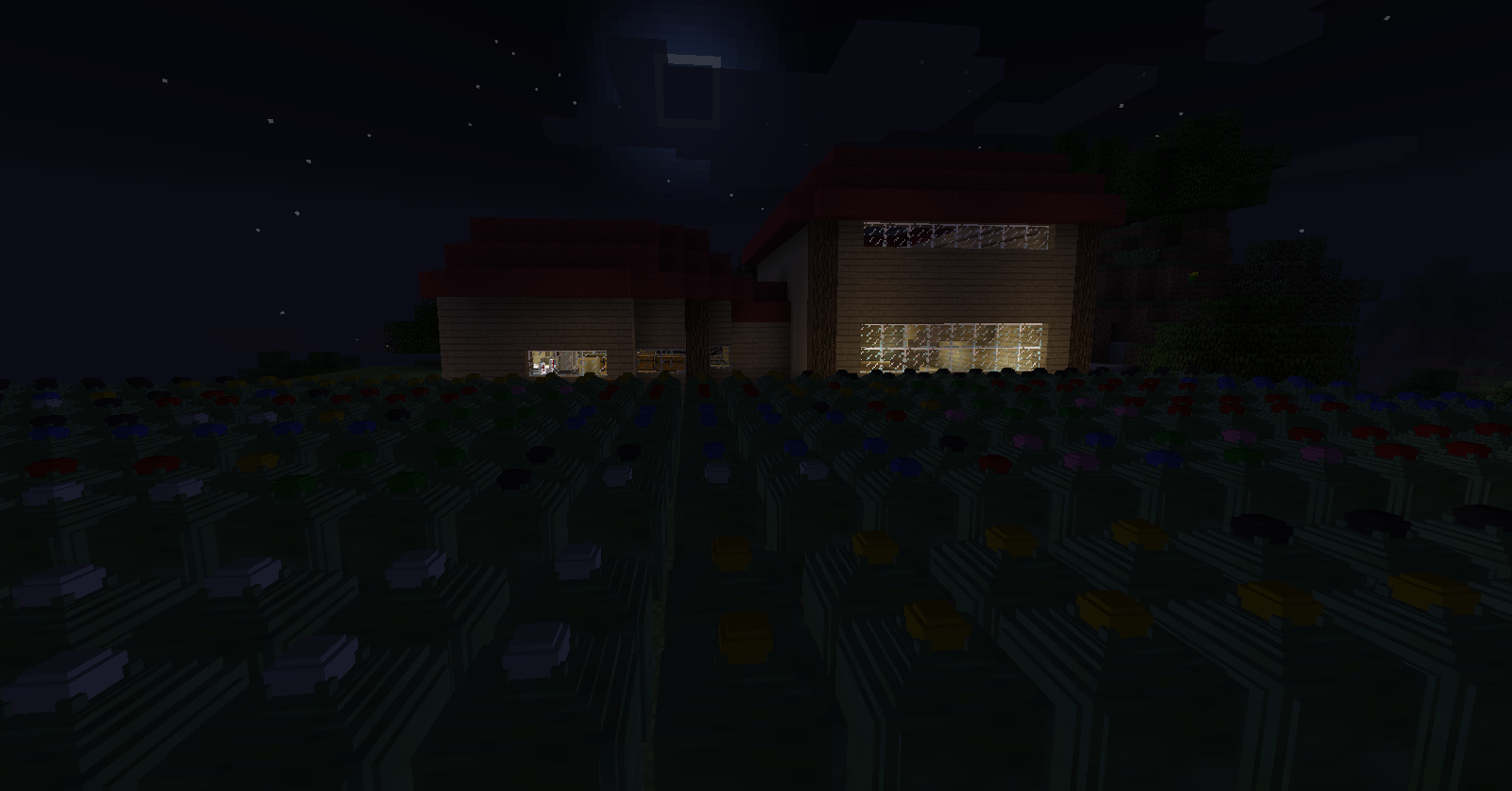 I still have more cleanup to deal with on the outside, and move all my chests and working related items inside the new building to get them out of the smaller base.

I changed the flooring on the second floor a touch, it is now lined with glass blocks to let more light through, as it was still dark at night up there. Doing so increased visibility considerably.

Nice-looking house! I'm glad that you're having fun with this mod, and with Minecraft in general. It looks like the creator of this mod put a lot of work into overhauling the game to be as Pokemon-ful as possible, and the fact that you're enjoying it as much as you are seems to vindicate that. As you correctly guessed, I'm not sure a Pixelmon mod would work well with the general goals of the Cemetech Minecraft server (which were, and continue to be, very intelligent and subtle PvP with careful scheming and planning, well-thought-out raids, and skillfully-designed cities).

tifreak...plays minecraft?! :O
Are apricots part of the mod or something that is new/I did not notice.

Kerm: Definitely having fun exploring the game, and they have put a ton of work into it. The Pokemon running wild, choosing whether to battle you or not, doing the call outs, etc, it's really cool to see. I'll probably try to find a server hosted by the pixelmon people at some point, while I continue to learn more about the game itself.

APotato: I blame marriland's videos :p It showed how fun the aspect of adding Pokemon to the game can be. This is probably the closest we'll ever get to a more realistic Pokemon game.

Apricorns are ingredients for making pokeballs. (I apparently had something else on the mind when writing the above posts >< Whoops ) There are varying colors, as can be seen by the above screenshot, though the one I use the most is black and yellow to build Ultra Balls.
↑
Quote

I have never played this game but have been looking into it lately.

The link to the YouTube video doesn't work anymore

Is there anychance of getting it back?
↑
Quote
Register to Join the Conversation
Have your own thoughts to add to this or any other topic? Want to ask a question, offer a suggestion, share your own programs and projects, upload a file to the file archives, get help with calculator and computer programming, or simply chat with like-minded coders and tech and calculator enthusiasts via the site-wide AJAX SAX widget? Registration for a free Cemetech account only takes a minute.