Fine. Is it possible?
You can call me Ernesto Agapíto Garcés con ya de Abelar. (Or someone2639. Both work.) Google is descending into cringe in 2019.
Code:

Anything is possible. But that's not the goal of this program. 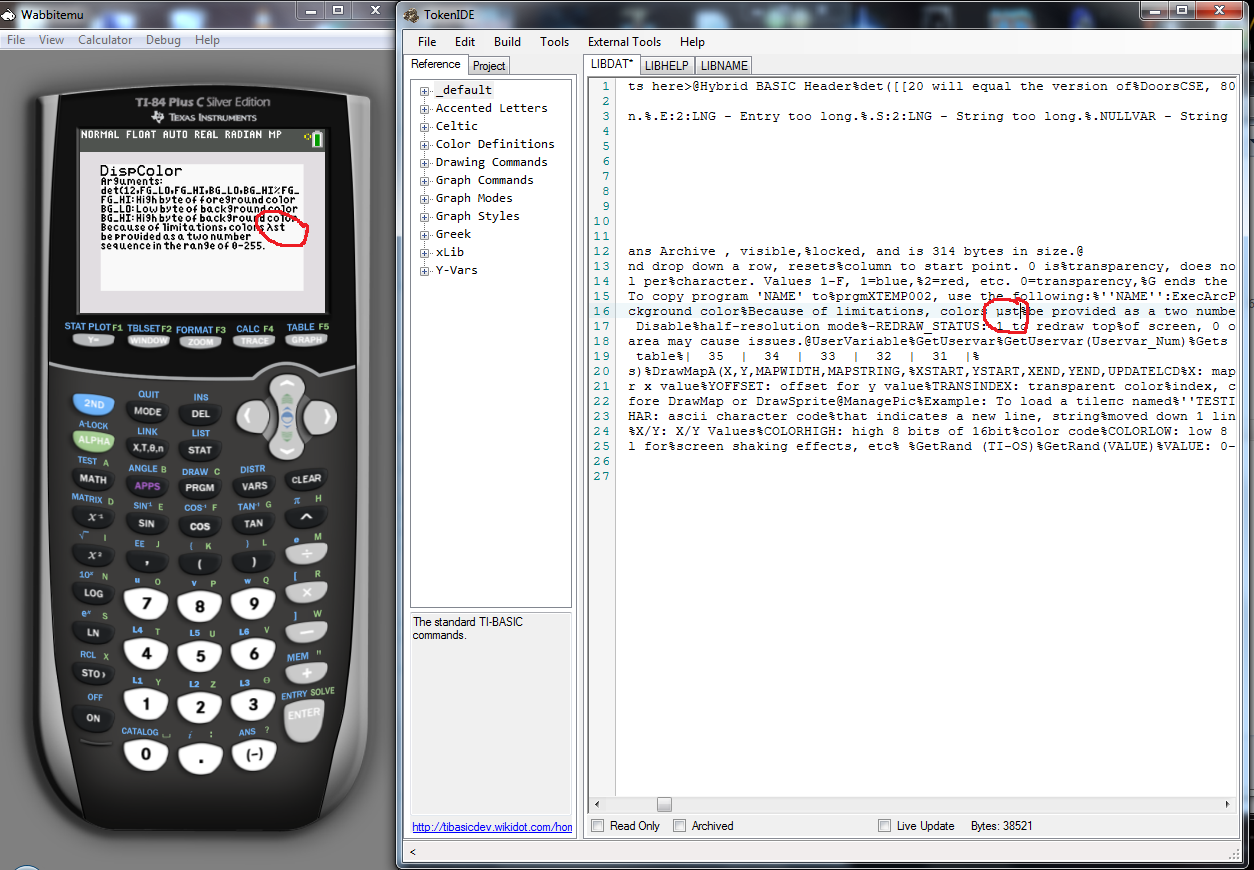 Tiny bug, but one none-the-less

And as per merth's suggestion, pulled the string, and it appears that the Text( token is actually at fault:

Just look to the right of the cursor.

This seems to be a possible bug with the Color (or perhaps just Mathprint OSes?)
Here it is on an 83+:

And here it is on a color:

Program is here:
http://merthsoft.com/MU.8xp
Testing it on an MP 84+SE once it updates on my calc (I don't have a rom with MP).

Looks like something broke in the color?
Shaun
↑
Quote

This is not only an amazing tool for both people programming this particular series of calculators, but also a great tool for people (like myself) looking into how code functions on these calculators without actually having one (for the purpose of porting to Nspire Basic or Java or some other language). Thank you for that. If I may make one suggestion, though, it would be to incorporate the ability to auto-indent/format code. It really improves the readability (especially for programs that exceed 100 lines in length). I really appreciate all the work you've done on this. I've been using it since March and nothing else compares
↑
Quote

I'm glad you've been enjoying it, and that it's been a useful tool for you! Auto indenting is actually top on the priority list right now, so once I find some time to do some more work, it should hopefully get in there.
Shaun
↑
Quote

I've found an issue I'm not sure how to debug.

I updated to the latest Tokens, and now the Block counter doesn't seem to work for my desktop (Win 7 64 bit) or the laptop I just got going (Win 8.1 64 bit). My old Toshiba that I just upgraded from seemed to work just fine. I'm wondering if it wasn't an issue with one of the updates that were posted in the last couple of months that is causing an issue with it? I didn't update the Toshiba overly often (it ran Win

so that's why I guess that.

Oh, okay, I'll check into that. Thanks!

Updated my xml file, and it fixed it. Thanks!

Out of curiosity, what would it take to get Tokens to handle Prizm files? Would we need to create an xml file similar to that of what's already in that folder?
↑
Quote

I think the XML file itself is mostly done, and there's some infrastructure for opening files in place, I just need to get the format ironed out.
Shaun
↑
Quote

Oh, okay. Good to know. If there is anything I can do to assist in making it closer to being finished, let me know!

If you happen to know the file format, that'd be pretty helpful

merthsoft wrote:
If you happen to know the file format, that'd be pretty helpful

I know the file format! SourceCoder has the necessary code to open and generate Prizm program files. TIFreak8x, did you ever get around to testing if it works properly?

I'd like to ask that the official tokens xml file has chi turned to |chi, it kept changing Archive and Unarchive to have that chi character, which would keep it from converting to the token. Might cause others issues as well, if they go typing things out and it converts on them.
↑
Quote

tifreak8x wrote:
I'd like to ask that the official tokens xml file has chi turned to |chi, it kept changing Archive and Unarchive to have that chi character, which would keep it from converting to the token. Might cause others issues as well, if they go typing things out and it converts on them.
Are we talking TokenIDE's XML or the modified, updated one that SourceCoder is using? The updated one has all of the Greek character inside {}s, so I believe there's just {chi}, but perhaps there are two chis the way there is a pi and a {pi}?

typing chi in tokens turns it into the chi character; I've updated the one on my computer (for any greek character) to have a | before it, to help keep that from being a problem.
↑
Quote

You should add support for Spiral! You already have to put the code from spiral into TokenIDE, why not take that an extra step further.
Life is really simple, but we insist on making it complicated. -confucius

spud2451 wrote:
You should add support for Spiral! You already have to put the code from spiral into TokenIDE, why not take that an extra step further.
If spiral gets enough of a following, sure.
Shaun
↑
Quote

Does any happen to know the TokenIDE tokens for the finance vars?
Life is really simple, but we insist on making it complicated. -confucius

Looking at the xml, I find this:

Thanks Runer!
Life is really simple, but we insist on making it complicated. -confucius

A potential feature to add: support for glitched user variables like string and picture variables with second token byte values of 0x0A or larger. This trick probably works for other types of user variables as well, although I'm not sure exactly which ones. A potential way to represent them could be like {Str0A}, but you could go with whatever you please.

For reference, this request arose from usmellPU running into the inability to edit a program that uses glitched string vars.
↑
Quote
Register to Join the Conversation
Have your own thoughts to add to this or any other topic? Want to ask a question, offer a suggestion, share your own programs and projects, upload a file to the file archives, get help with calculator and computer programming, or simply chat with like-minded coders and tech and calculator enthusiasts via the site-wide AJAX SAX widget? Registration for a free Cemetech account only takes a minute.