Those store displays can be very useful when they're not too heavy. I wanted to get some from Target when they were closing and maybe Sears as well but by the time they marked the prices down the only stuff left was heavy stuff that can't be transported with a cab.

Yeah I was lucky enough that the pharmacist was literally 50 meters away from my apartment building...
TI-Planet.org co-founder / co-admin
↑
Quote

When I was young I had a Casio wrist watch which was also a calc, with tiny rubber buttons. But I have lost it for decades.
子非魚 安知魚之樂
↑
Quote

Oooh I had one of those way back in the 90's. I don't remember what ever happened to it. Also I'm still eyeing an HP 39g+ (maybe to install a 48gII OS or NewRPL if it's compatible?) on Ebay but I'm unsure if I'm eligible to the Quebec $500 inflation offset due to my financial situation so I might be forced to postpone future calculator purchases.

Yes Casio have been practicing concept of crossover since 90s. I admire it. This could be one of the reasons why I'm so fond of the Casio brand.
子非魚 安知魚之樂
↑
Quote

I had them all laid out for a single picture but was unsatisfied with the quality it produced so I took two instead and am still disappointed that's what I get for using an iPhone 5s, right?

.
The five calculators in the lower left are my prototypes.
Negativity: the best way to deal with my square imaginary friends. - LogicalJoe [2018] | Go make a MyCalcs profile already!

I wanted one like this for a while. Now to figure out what games run on HW4 tho...


LogicalJoe wrote:
Graphing calculator 100+ collection update!
How many of those TI-81s and TI-82s have fully working LCDs?

KermMartian wrote:
LogicalJoe wrote:
Graphing calculator 100+ collection update!
How many of those TI-81s and TI-82s have fully working LCDs?
All the defective ones should be labeled as such on Mycalcs either with "Screen" "LCD" "does not turn on" ect.
Todo: standardize
Negativity: the best way to deal with my square imaginary friends. - LogicalJoe [2018] | Go make a MyCalcs profile already!

There we go I have updated MyCalcs with my current collection. More GrayLink cables than you can shake a stick at and other accessories.

Very old outdated image that I have likely posted before. 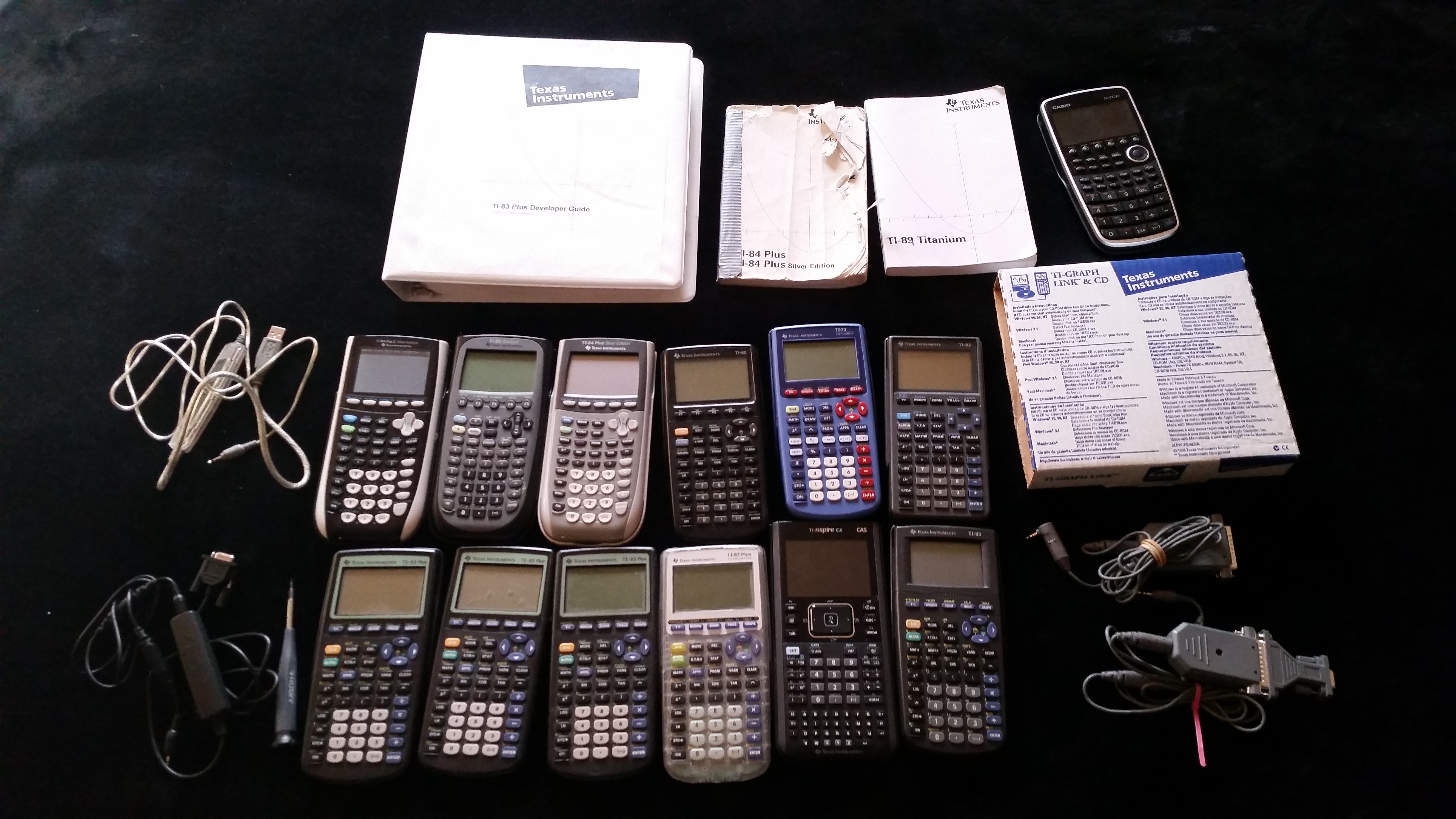 I have a ti 84 plus ce python and two to 84 pluses and one to 83 plus
You can contact me at scratchcollaboration95@gmail.com
↑
Quote

I missed a TI83 at a tag sale. It was $26 then, the next day everything was supposed to be 75% off. Went back for it.. and it was gone.
I haven't gotten any new TI' since my nSpire touchpad CAS.
My son and I have been "branching out" a little. I got an HP49G+ at a low price on eBay. HP is very expensive to acquire which is why I collect TI.
My son went for a Casio for Python, and has a Numworks that is for evaluation.

It was shipped rattling around in a box with no padding whatsoever and miraculously made it all the way across the US with no damage! The screen is perfect, case has no major wear, and all buttons work.

I have another TI86 but its display has many lines which have defied fixing.
-------------------------------
I've slowed way down as I've seen from the posts that it's only too tempting to amass a huge collection. Only one acquisition since the 92+ below. I acquired a TI89 and after some fiddling with the screen controls it works fine!

I've always liked the key legend colors and button shapes and look of the original TI89 over the Titanium.

I get the most comments on the 92+. Everyone I show it to thinks it's a label maker.

------
Still owe that photo.. because the collection keeps expanding!
In addition to the 92+ mentioned below.. I scored a lot containing nine TI-82's in varying condition from eBay-for $1 plus shipping

Most have a bunch of missing pixel columns but one of them shows promise. I bought them to try the soldering iron heat the cable fix. That didn't work on the 82 hat I had prior. All of them boot and all are are intact save for one, and one of them is the older design.

Also.. I don't have qualms about buying older calcs labelled as School Property. Schools (especially the more affluent districts) upgrade their calcs and usually don't keep the old calcs around.


trs80 wrote:
Photo coming next when I round them up

:
TI82 eBay. Some horizontal lines. Haven't tried to fix.
TI83+SE eBay, advertised as non working but works fine!
TI84+ SE with pink and blue inserts. Bought new for kids when in school.
TI86 eBay. Some vertical lines to fix.
TI89 Titanium Goodwill, $8. The only TI graphing calc I've ever seen in a thrift store. I was walking past some lamps and it was sitting there and I snagged it.
TI Voyage 200 eBay. In very good condition and came with a cover and two link cables! This one is a lot of fun after owning the 89 Ti for awhile. I usually use the TI89 while wearing 4x magnifying glasses, I don't need those with the Voyage 200..
TI nSpire 1st edition with both keypads. eBay
TI nSpire CX CAS (2011 version) bought new for kid while in school: he was the only one in school who had one at the time. We're eyeing it for nDless..

We started out a few weeks ago having just the 84+ SE, 89 Titanium, and TI nSpire CX CAS. The others were acquired in the last month, I've just been looking, and lucked into them for the most part.

One more: I have a TI-59 programmable somewhere (still trying to find it) along with its PC100 docking station. Goodwill, at the same store, I found an HP46 printing scientific desk calc and an HP67 which I sold off.

UPDATE: found a bunch of basic function for kids TI108's at a yard sale. And just scored a TI92+ on eBay that is coming next week!

-TRS80
↑
Quote
Register to Join the Conversation
Have your own thoughts to add to this or any other topic? Want to ask a question, offer a suggestion, share your own programs and projects, upload a file to the file archives, get help with calculator and computer programming, or simply chat with like-minded coders and tech and calculator enthusiasts via the site-wide AJAX SAX widget? Registration for a free Cemetech account only takes a minute.