So what exactly does CSRacing V1.2 add?
- The paintshop (planned for CSRacing Deluxe and doesn't really do much here, but I figured I'd give monochrome calc users the option to use it anyway)

- The Cr. reward for perfect launches has been increased from 10 Cr. to 13 Cr.

- A facelift to the Main Menu for CSR Garage.

- A couple optimizations to CSRacing.8xp to bring its file size down by around 2 bytes.

I've uploaded this update to the archives and every other site CSRacing is hosted on.

So, I initially was just going to fix a display bug and release a V1.2.1, but I figured that since a lot of issues came up through rushing updates, I'd give myself time to debug and improve further.

In doing so, I've not only brought down the total size of the game (both CSRACING.8xp and CSRGARAG.8xp) down by 48 bytes, but I've also finally fixed the game's clunky menus:

Revamped the way you return from menus in CSR Garage.
Fixed a display bug when the "Create Car" option was unlocked.
Fixed an issue where the SRT4 was displayed as a Tier 1 car instead of a Tier 2 car in the car dealer.
Made the event completion stats on the Main Menu display regardless of whether or not their respective events have been attempted before.

This has been done for about 2 weeks now, I just never got around to actually releasing it.

Now that I have my own CE, I've restarted development on CSRacing deluxe, now based on V1.3 instead of V1.0. While I still haven't quite finished moving coordinates around in CSRacing yet (Along with some of the color integration), CSRGarage is basically done.

Here's a ton of screenshots: Title screen has not really changed much yet May do some more stuff with color here 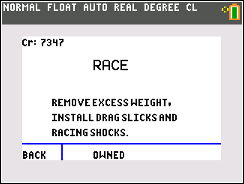 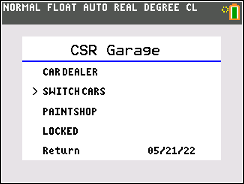 The flashing arrow works better than i expected on ce 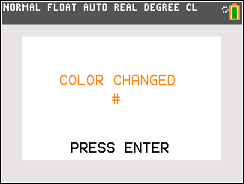 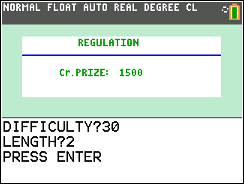 Each event type has its text color coded- Regulation races are green, Ladder light blue, Crew Battle...probably one color per crew, Car specific Orange, and I haven't gotten to Custom Spec yet The racing screen looks good besides the slight downgrade to car sprites... ...until more text gets involved.

You can find the new WIP CE version here: https://github.com/NinjaWeedle/CSRacing/tree/CE

The game is technically 100% playable, but the racing portion still needs work with text placement.

I'll also be releasing V1.3.1 of the monochrome version alongside CSRacing Deluxe in June in order to fix the Paintshop not working and make a few optimizations.

I need to give this a try soon. Are the screenshots supposed to be animated? Because if they are supposed to, well in my case they're not animating. (I'm just curious since big project update posts with a large number of screenshots where none at all are animated isn't very common nowadays)

DJ Omnimaga wrote:
I need to give this a try soon. Are the screenshots supposed to be animated? Because if they are supposed to, well in my case they're not animating. (I'm just curious since big project update posts with a large number of screenshots where none at all are animated isn't very common nowadays)

They aren't, they're direct captures from TI-Connect CE. I'll be doing an animated one soon enough.

The CE version is nearly complete now, with the racing screen just about complete.
Here's that animated screenshot: 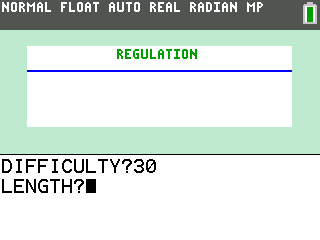 Nice progress. I'd suggest making the track appear faster with the yellow bars gradually appearing too, else I'd make the black lines appear instantly like the yellow ones.

DJ Omnimaga wrote:
Nice progress. I'd suggest making the track appear faster with the yellow bars gradually appearing too, else I'd make the black lines appear instantly like the yellow ones.

To be fair, this is about 2x faster on the later revision calcs, which is what ive mainly been using to develop this. The slowness is due to the Shade( command I use for the finish line as opposed to the Horizontal commands used for the double yellow line.

Im conflicted on also using Shade( for the double yellow as that would double the intro time.

Oh, is it pure BASIC by the way? I could maybe play on my TI-82 Advanced Edition Python if that's the case because the hardware is heavily based on the later revision calcs. Shade is amazing by the way. I can display a rainbow flag vertically at incredible speeds and even make animations with color rotation.

DJ Omnimaga wrote:
Oh, is it pure BASIC by the way? I could maybe play on my TI-82 Advanced Edition Python if that's the case because the hardware is heavily based on the later revision calcs. Shade is amazing by the way. I can display a rainbow flag vertically at incredible speeds and even make animations with color rotation.

Yep, pure BASIC- No libraries or even picvars.
Im not too familiar with CE-specific visual tricks yet. Are there ways to speed up Shade(?

I don't know personally, but isn't using Line() an option? 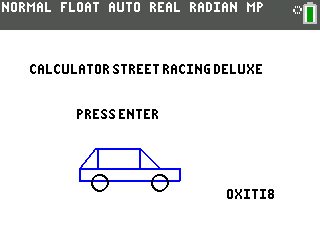 After 8 months, CSRacing is now playable on the 84+ CSE and CE.

I did finally find a way to replicate the car sprites from the monochrome version using Pt-on commands instead of pxl-on commands. (albeit not while the cars are moving so the game doesn't run even worse than it already does on the CSE)

Even if there are a few visual disparities with things like the Shade( command used finish line not really creating the checkerboard pattern seen in the monochrome original, and the fact that I swapped the position of the ladder and car specific race completion stats in the main menu for some reason, I'm pretty happy with how this turned out. It's that CE version people have been waiting for.

I also released CSRacing V1.3.1 to fix the paintshop bug and bring up the monochrome version to parity with Deluxe.

So for the past couple of weeks, I've been working on a sequel to CSRacing.

There are quite a few issues with the original racing engine: It barely factors in RPM at all besides the launch- Gear changes were not determined by ratios or redline but rather your MPH- meaning that the ideal time to change gears was always right before the max MPH allowed in each gear was reached, rather than anything to do with peak torque or horsepower.

The "power band" in CSRacing is a completely flat line (Imagine every car having a poorly made CVT transmission) with the acceleration rate being the same throughout a gear no mater what speed you were moving at.

There's also the complete lack of any sort of wheelspin/traction mechanic. Every car has perfect grip all the time.

The main problem with the simple driving mechanics was balancing opponent drivers: when your acceleration speed is essentially determined by two numbers (Your car's acceleration rate * (1-(Gear* accel level deduction per gear))) it makes it hard to have the opponents be challenging yet not too difficult for every car in a tier. Naturally, some of the crew battle races can only be feasibly beaten by one, maybe two out of a total of ten of a tier's cars, making making several cars effectively useless in that mode. (Kenido, the Tier 2 leader, is a particularly bad example of this as you are basically forced to use the GT-R R34 to beat Race 3 against him. This also applies to Goomzo's [Tier 1 Leader] Race 3 albeit to a lesser extent as while the Javelin is the best car for that race and the starter car [The Sivic Si] doesn't cut it, certain other cars can still be used to beat him.)
This issue could have been solved by expanding on the archaic tuning system (which was finished rather early on in the game's development), which only allowed you to upgrade a car 3 times (which essentially just adds 0.3 to its acceleration value)
However, to flesh out the tuning system to allow for different parts to be fitted to the car (ex. tires, exhaust kits, etc.) instead of just general purpose upgrade packages would have required a new racing engine.

There's also more minor issues such as the rpm not being able to display whole values correctly (for example an RPM value of 6 on certain carslike the GTR R34 may appear as 6.05(Deluxe) or 6.25(Original)) revving the engine and getting perfect starts in Deluxe on M+ revisions of the CE/ the CE python being much more difficult than in the original due to the increased speed of the calculator creating a need for MUCH faster mashing.

TL;DR, the old engine is too restrictive so I'm rewriting it in this sort of semi-sequel to CSRacing.
In this half-sequel-half-demo, I'm looking to fix many of these issues with the engine now (as well as making quite a few visual tweaks) before I try and make the jump to a less restrictive language like C to do a full sequel to the game. The game also is no longer split into two programs- just one now

As for the name: CSRacing Evolution.

Here's some screenshots of the current version (game is not available publicly yet): 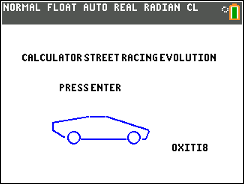 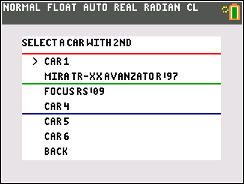 I've already made several visual improvements over Deluxe, most notably the removal of the original's infamous "car trails". While this does result in the game running a bit slower, this does help make it much more playable on those newer, faster CE models.
There's also a timer now (the unit of time is arbitrary, it's essentially the amount of cycles it takes to reach the finish line) that allows you to compare times with other people.

The track length is also now almost three times as long as the original, (240*length multiplier arbitrary units as opposed to 85*length multiplier) allowing for longer and more intense races.

I've only added one out of a total of six planned cars (2 for each tier), and even that first car is mostly copy-paste from the first game (Focus RS '09) as I still have a lot of work to do on the mechanics.

This game wont be nearly as large content wise as the original, as this is more of a demo if anything- think of this as something more in line with games like Gran Turismo 5: Prologue if that makes any sense; a precursor for things to come.

Of course, that may be subject to change- right now I have no plans to have a new Crew Battle mode in CSRacing Evolution (I still haven't even removed the first game's crew battle mode from Evolution's code), but likely will substitute it with a different campaign mode. The Car Specific, Ladder, Regulation, and Custom Spec modes will be returning in Evolution.

The game is still pure TI-BASIC, same as before.

I might make a new topic for CSRacing Evolution once I have more to show(and probably some sort of alpha release). Until then, I'll be using this.

The CSRacing II: Evolution topic can be found here.

After working on CSRacing II for quite a while, I've decided to bring a couple graphical and optimization techniques I learned back to CSRacing Deluxe. 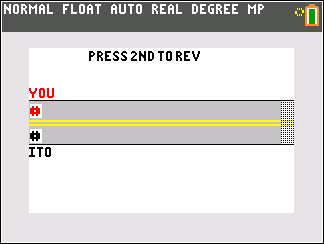 CSRacing Deluxe now has grey roads and a bit more color variation in the game's numerous Line( commands. I also made a bunch of optimizations to CSRGARAG's menus.

The main reason I did this though was to give CSRacing Deluxe an icon that is in line with CSRacing II's new DCS8/Cesium icon: