On the discord server, we have a channel specifically for discussing 3d printing, as there are enough people there that own a printer and want to talk about it that it merits its own place. Though there are a few topics with 3d printing in mind, we lack a thread for sharing cool prints in the same theme as the photography topic.

I particularly enjoy printing geometric shapes- the first thing I printed after getting my printer (at the time, a Monoprice Select Mini V2) and running the test file were the platonic solids, because I think they look cool on my desk.

When I came across this video which provided a model for a helicoidal cubic trisection, I knew it would be pretty cool to print them in the chinesium metallic filaments I bought off amazon (the cheaper filaments thus far have worked fine for me- they just require a little bit of wrangling to figure out temperatures since the temperature isn't quite consistent all the time. On the other hand, my hatchbox PLA worked right out of the box and produced gorgeous prints with no issues, whatever)

Here's an imgur album with the results

Metallic filaments are very sensitive to sudden changes in speed and direction, so hiding the z-seam is an easy trick that you can do to improve the surface quality of your prints. I printed an example where I did not hide the z-seams and you can see it on the left in the image below (click to enlarge) 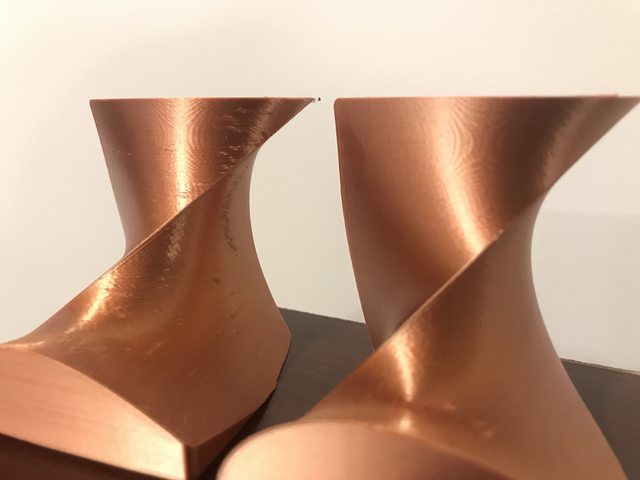 This is awesome, nice work! And that surface quality on the right is impressive!

The first thing I printed since the last post was a giant ball bearing. This thing is fantastic- it feels great.

It worked first-try for me- according to the comments, it's important to make sure that you use a 0.15mm layer height if you print your own (which I highly recommend, it's an awesome thing to have sitting on your desk). It has its own supports, so you can print without turning them on. I wanted mine to feel fairly solid, so I printed it with a fairly high 22% infill and with 4 walls. Even though it took 15 hours to print and used about $4 of filament, I think it was worth it.

I also printed a Meissner tetrahedron, which is a solid of constant width.

You might have seen its 2-dimensional cousin, the Reuleaux triangle, starring in some mind-bending footage like these floating around the internet.

You can also form a Reuleaux tetrahedron, but it doesn't have a constant width. The Meissner tetrahedron fixes an issue with the solid by rounding out three of the edges in a special way. I'm intentionally glossing over the math here a bit since it's kinda off-topic- it's very, very, very interesting.

I kinda butchered my Meissner tetrahedron print- I went for the probably impossible print-in-one-piece model instead of the much easier two-part print, and my supports were too sparse. This meant the bottom of the shape was pretty ugly, which I fixed with some sanding. I printed a set of three at 0.1mm layer height and 10% infill, and they work great.

When I saw a collection of xkcd characters, I knew I had to print them. I scaled them up to 150% and used 100% infill for strength. Each one took about half an hour to print at 0.2mm layer height, excluding the base. I strongly advise that you print these with a skirt- brims/rafts would be too hard to remove here.

The base itself did not work for me- I had to scale it up to 175% to work with my larger models (use about 120% for normally-scaled models). I printed it with 10% infill and 3 top layers. These also took roughly half an hour to print at 0.2mm layer height, but I only printed two.

To showcase these models, I'm using an ingenious photographic sweep stand. It prints in three parts that form hinges when connected using some filament. By clamping them to a piece of cardboard and putting in a sheet of paper, I get a pretty nice background for photographing my prints.

I printed it at around 100mm/s with a 0.3mm layer height and 10% infill- I was more concerned about getting a fast, functional print than a pretty print. The result is remarkably ugly, but I shaved nearly an hour and a half off the print time (compared to Cura's default "Extra Fast" preset).

I also need a larger sheet of paper/card stock to fit in my stand. Currently, the usable portion of the stand is about the same size as the square mode on my iPhone, but I'd like to be able to take better photos

Here's an imgur album with the results.

Today I printed a succulent because it's all the fun of having a plant without any of the work. 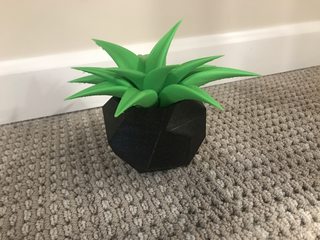 It's in a pot made from a pentagonal icositetrahedron- I made it in blender by just doing some boolean operations on a file I just had in my downloads folder. Here's a link if you're interested in printing it yourself: Pentagonal Icositetrahedron Flowerpot. It works really well as a flowerpot, I might end up printing more of these.

The plant itself comes from thingiverse. I was really impressed with how well it turned out with rather low infill and line count and supports only when touching the buildplate.

I can't wait to forget to water it.
↑
Quote

I have bought myself a Prusa i3 MK3S+ kit which arrived on Friday. So, naturally:

The below conversation comes from the discord server. I am putting it here in the interest of making it more readable, accessible, and permanent. If you'd like to add to it, send me a message or post in the thread below.
GregsAStar wrote:
My friend and I are thinking about getting an ender 3 for our apartment. Is there anything I should know before buying it? I would appreciate any tips/pointers


In no particular order:

A necropost to be sure, but a welcome one.

I started making custom buttons for the TI-84 CE Plus at one point and recently found the files again. I've finished the project and prettied them up.

Enormous image of keys in my CE

I made 'em with FreeCAD and printed them on my Ender 3 Pro. They look awful (in my opinion) since I lost my optimized settings when I ruined my bootmanager at some point. Bootmanagers are allergic to me. Here's the link. There's only five buttons on the whole calc, and whoever designed them went with pretty simple values for the sizes. I had to shrink them slightly to account for the layers rubbing and different keys expanding/contracting during testing. I obviously will not use them since I can't get (legible) text inscribed in them, but I might be able to do something if I buy a smaller nozzle at some point. I've considered making a full-on case copy, but it's a lot more complicated then something I could do so I'll leave it be for now, or make a simplified custom case someday.
"You can say literally anything and claim it's a quote from The Art of War." -Sun Tzu

Good stuff, _iPhoenix_, Nik, and King Dub Dub! My (and geekboy1011's) contribution was with our Da Vinci XYZs, in this thread: https://www.cemetech.net/forum/viewtopic.php?t=10958