yea, also a built in hex editor that automatically opens when you try to open a asm program. Maybe you and Captain Calc could integrate your programs so that Hexaedit opens files that you feed it?

randomguy wrote:
yea, also a built in hex editor that automatically opens when you try to open a asm program. Maybe you and Captain Calc could integrate your programs so that Hexaedit opens files that you feed it?


I think that would be a great idea. Could it open a C program or appvar as well, since Hexaedit works on those too?

Sorry for late reply, it's been a bit busy this week.


TIny_Hacker wrote:
Wow! This is really starting to take shape as a shell! Do you know how soon you'll have a release ready for the public? Great work on displaying programs on the home screen; it looks even better than I thought it would! Will it be possible to edit programs through Xenon?

, I can't say when I will be releasing the shell, but hopefully soon (you can also look at the Trello Board to view its development process). Yes, it would be possible to run/edit programs thanks to Epsilon5.

randomguy wrote:
yea, also a built in hex editor that automatically opens when you try to open a asm program. Maybe you and Captain Calc could integrate your programs so that Hexaedit opens files that you feed it?


A while back, I said the last program run name will be stores in "ans". So the user would have to run the program they want to Hexaedit to edit and return to the shell then run Hexaedit (Hexaedit should read "ans" and open the program in its editor), maybe later on the shell can just do it automatically if it detects Hexaedit.

Hello Cemetech, It's Sunday and its time for Xenon weekly update. I did a lot this week so lets get into it:

Opening folders:
I attempted to open folders via code I haven't implemented it graphical, but it should work too. 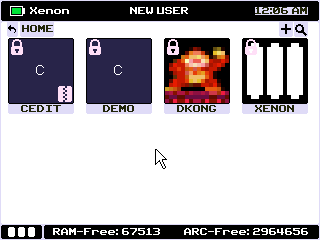 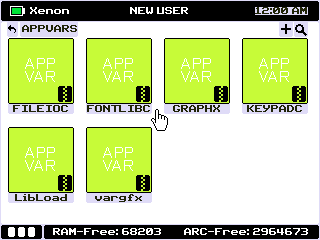 The first screenshot is Xenon's in its home folder. While the second screenshot displays Xenon in it's appvar folder.

Displaying Program Attributes:
I also implemented displaying program attribute icons and allowing the sprite to change based on the sprite color.

I changed the attribute icons a bit (only the archive).

Displaying Backgrounds:
I created a prototype displaying a tile map image (I haven't implement dithering yet).

I don't think it has a major color difference based on original photo. 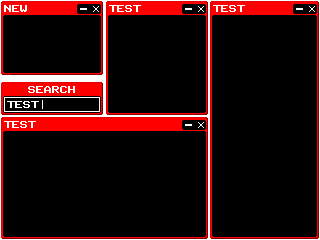 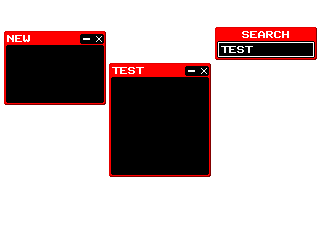 It should support a wide rage of widgets from button, menus, switches, and etc.
Here is a concept displaying Xenon using oxygen window system: 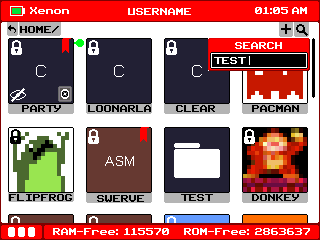 Thanks for reading, See you next week

There are 524 users online: 3 members and 521 guests.
Members: Alvajoy123, KnightsWhoSayNi.