Previously in this topic, a truce was made between TI and some of the community with the following unwritten conditions.

In exchange, the Artifice jailbreak will not be patched.


As expected, the community has abided by these rules. However, TI recently released the TI-82 Advanced Edition Python which does not have Cabri Jr. pre-installed nor does it have the ability to install the app separately.

Does this mean TI has broken their promise once again? Technically they haven't patched the jailbreak, they've just found a way around the jailbreak being used at all. Do we expect the ability to install specific apps to be removed in future OSes for the TI-84 family?

No, the TI-82 Advanced never had CabriJr. so it is not surprising that its successor, the python edition also doesn't have it. In fact, ASM was always blocked on the TI-82 Advanced since it was released in 2015.
There are lots of features that the TI-82 Advanced lacks such as smartview support and USB support for things like the TI-Innovator. This is just so that TI can distinguish it from its more expensive models.
What you should really be mad about is the removal of the periodic table app, which was present on the monochrome 82A

.
EDIT: There are lots of valid reasons to hate on the 82AEP that I've listed here but the lack of CabriJr shouldn't be it.

Yeah, what womp said.
The upcoming TI-84 Plus CE Python Edition still has the CabriJr app, and I tried, arTIfiCE works fine: 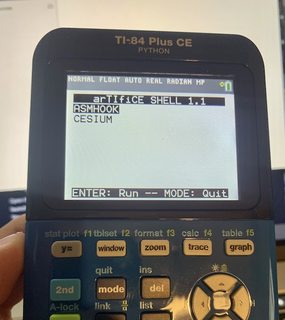