Hey all,
I've been working on a new game for the Ti-84+ in BASIC called Sonic TI-Blast. If the name didn't already give it away, this game was inspired by Sonic 3D Blast on the Sega Genesis. It includes:
- 3 Acts (levels)
- Endless mode
- A save feature
- 2 endings
(Note: Make sure to run this game in classic mode for best results)
The first two Acts in action:

I've submitted Sonic TI-Blast V1.0 to the archives here http://ceme.tech/DL2041 on Cemetech, so let me know what you think about it as I'm still quite new to the calculator scene.
↑
Quote

I am now working on the next version. Here's what you should expect in V1.2:

- Panel Panic zone featuring 3 new acts. (in progress)
- A save feature for the story mode (Done)
- Optimization to reduce memory leakage and make the game run faster. (in progress)

I'll post more details to this thread once V1.2 is finished. Feel free to post any suggestions or comments.

This update fixes most of the memory leaks (Primarily endless mode), and adds small QOL changes like autosave in the main game and being able to hit any key on the title screen to get to the menus.

I have uploaded it to the archives here and on ticalc.org.

- Panel Panic Act 1 is finished, and several small changes have been made to make everything look and run a bit smoother.
- There are now 2 chaos emeralds to grab, making it possible to get the good ending.
- Added an Icon for DoorsCS7.

I took several precautions to prevent any memory leaks from occurring in PPZ Act 1.
I've submitted V1.2 to the archives. (here: https://www.cemetech.net/downloads/files/2041/x2138)

You know you can make the program do Classic automagically, right?

Nomkid wrote:
You know you can make the program do Classic automagically, right?

I am aware, but I wanted to maintain Non-Mathprint OS compatibility.

The votes are in: there will be two versions of V1.3: BLAST and BLASTMP.

BLASTMP will enable classic mode when it first runs, and re-enable Mathprint when you select EXIT.
BLAST will not have these features.

V1.3 should be released sometime this month.

I've been throwing around the idea of a CE port for a while, so today I decided to take a shot at it. 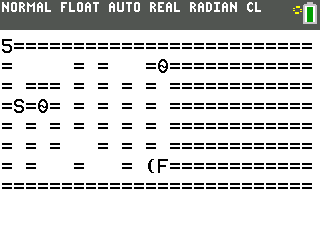 Most of the work was just adapting the levels for the larger display, although some stuff is still buggy.
The CE version also lacks a title screen at the moment.
I also made a Mathprint-OS version for increased speed on OS 2.53MP+.

V1.2.3A has been submitted to the archives.

EDIT: Only the first 3 acts work on BLASTCE for some reason. If anybody knows a fix for why then don't be shy about letting me know.

Update Time!
After 2 months, I've returned to working on Sonic TI-Blast! I just recently released a small update: V1.2.4. It doesn't include many changes- just some minor QOL changes.(The file size is the same as V1.2.3)

However, I do have some bigger news: Sonic TI-Blast is now available on GitHub! You can find the repo at https://github.com/NinjaWeedle/Sonic-TI-Blast

I've also made some serious progress on Panel Panic Zone Act 2- It will be included in V1.3!

So when will the long-awaited V1.3 release? I haven't had a lot of time lately, but V1.3 should be avaliable this weekend here on Cemetech as well as on GitHub/TIcalc/TiPlanet!

In the meantime, you can find V1.2.4 here on the archives as well as on GitHub at https://github.com/NinjaWeedle/Sonic-TI-Blast/releases/tag/V1.2.4

It includes:
- Panel Panic Zone Act 2
- Act transition screen changes, plus the addition of color on the CE version!

V1.3 has been submitted to the Archives here on Cemetech, and is also availaible now on TI-Planet and GitHub.

So what about ticalc.org?
The ticalc.org release is split into two versions: The TI-83+/TI-84+ version(BLAST and BLASTMP), and the TI-84+ CE version(BLASTCE), going by Sonic TI-Blast CE. The actual program files included in both versions on ticalc.org will continue to be identical to the combined releases here on Cemetech and TI-planet/GitHub (minus the README.txt), just split apart. Also of note: the TI-83+/TI-84+ version will still be avaliable here on ticalc.org as usual.

As usual, let me know what you think of the new additions or about any bugs you find in this thread.
Also the CE version may or may not still be bugged in PPZ Act 1

So, turns out there was a problem with the CSE/CE version: None of the levels would load! I guess that's what I deserve for not testing color implementation of which I had never tried until today...

Anyway, V1.3.1 fixes this(and has very minor changes elsewhere), and it has been submitted to the archives.

V1.3.2 has just been released- here are the changes:
- Special stages now deduct the number of rings required to enter them. (While still giving you enough rings so as to not get softlocked)
- It is no longer possible to farm more than 3 chaos emeralds in PPZ act 2.

As usual, Sonic TI-Blast V1.3.2 has been submitted to the archives and is available on GitHub here.

I've begun work on V1.4!
Here's what to expect in the next release:

- The final level, Panel Panic Zone Act 3, with a final showdown against Eggman.
- A new ending
- Further improvements to overall software stability and other minor adjustments in order to enhance the user experience.
- A new intro picture- here's a quick look at it:

What do you think?

Looking good man, any thoughts on using BASIC grayscale for the titlescreen?
"My world is Black & White. But if I blink fast enough, I see it in Grayscale."


I'll have to look into that- depending on how it's done, I could implement it. My main concern is size- The titlescreen already adds on 700+ bytes to the overall filesize, and if BASIC grayscale is done with 2 picvars that would mean tacking on another 700+ bytes for something not really vital to the game...we'll see. Now, if there's some way of doing it that I'm unaware of that won't massively increase the filesize, do let me know.

There are 632 users online: 2 members and 630 guests.
Members: Adurna, IcedLemondrops.