TimmyTurner62 wrote:
Michael2_3B wrote:
Ok, so I have some great news! We are getting closer and closer to the release date of this project. I know I haven't posted in a little bit, but this new feature I am adding will make up for that.


That's a little late april fools...
Anyway that would be cool in reality

I didn't want to post this yesterday, so as to avoid any doubts about authenticity. I know people like to joke and stuff on April 1st so I am steering clear of that.

That looks like it would hurt your finger...
I love having to connect a camera to my computer to play a game! It seems counterintuitive, and it is.
Nice try though

Wow, either your camera lenses/ sensor is really broken, or your video editing skills need some polishing!

It looks really cool, how'd you edit in the swipe?

Clearly, you never read anything.

I didn't want to post this yesterday, so as to avoid any doubts about authenticity. I know people like to joke and stuff on April 1st so I am steering clear of that.

TheLastMillennial wrote:
Wow, either your camera lenses/ sensor is really broken, or your video editing skills need some polishing!

It looks really cool, how'd you edit in the swipe?

Ive started getting into Adobe After Effects, so there is more going on here than you think. Despite some of the crappy issues you see in the video, this still took me a few hours to figure out, and about half an hour to render...

Theres actually two videos. One is a real overhead recording of the screen, except it is cropped to only include the actual gameplay. In that recording, I am actually using the keypad, but that was cut out of course.

The second video is me just moving my finger around the screen. I recorded that, with the previous video playing on my computer so as to have a reference where to swipe

The hardest thing, as you can imagine, was to actually combine these two videos. I was able to put the cropped gameplay over top of the screen in the 2nd video, but then I also had to figure out how to keep my finger from not getting hidden by what I just put in. Thus, a few masks later and some clever keying out, I was able to get just my finger from the 2nd recording and overlay that on top of the gameplay.

And after dealing with all that, I was too tired and it was getting too late to try and fix the other issue

Eh, even tho we argue, I still love the progress!
I really think you would get amazing reviews on this, if it gets submitted.
And I'll try to end our arguments by aiming to be the first one to leave a review for your program!
↑
Quote

In other news, I am incredibly thankful to Mateo for helping me out with the real project! There has been an attempt to start implementing a background, and this is Mateo's potential wood background implementation.

The wood is not my favorite though, I'm thinking I will probably replace it with something that looks more cartoon-y just like the sprites. But that's only if Mateo is able to speed things up/fix graphical issues with the background. For now, I am continuing to work without a background.

When I first mentioned the background, I specificlly referenced the default wooden background from the mobile app; sorry for the confusion.

Although it's not the final background, I think having a BG makes it look more complete.

Of course you will need to find a speed solution, but I'm sure you can get it there.
"My world is Black & White. But if I blink fast enough, I see it in Grayscale."

I agree with the previous posts, the background really adds a lot to the game and I think the real original fruit ninja background would look perfect in this! Do you plan to add multiple backgrounds or allow us to send our own? Great job Michael and Mateo!

TheLastMillennial wrote:
Do you plan to add multiple backgrounds or allow us to send our own?

I'm not planning on allowing people to send their own, but I'll consider adding a choice between multiple backgrounds in-game. And if I don't do that, I think people will still be happy if I can get just the background from the original game working.

Motivation is low for this project at the moment, I'm working through some other life stuff at the moment but I'll have some updates later in the month.

I'm also considering the possibility of having this done for maker faire.

Trying out some things, I would like to have a rotating triangle or some kind of glowing effect behind the pomegranate. If possible I would also like a "zoom in" effect but I'm not sure about that.

(This is a still frame) 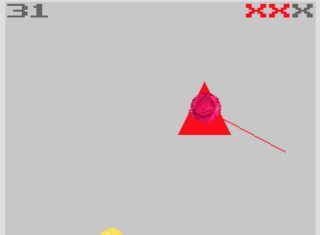 Hey! What happened? Why is this not posted in the archives yet? I made the file myself from github and it seems like its ready for release! What's the holdup?
Life has no meaning. Each of us has meaning and we bring it to life. It is a waste to be asking the question when you are the answer.
Check out my youtube channel! https://www.youtube.com/channel/UCyLLc9cff7zmkc0j5rC6-7g
↑
Quote

dunlavdy wrote:
Hey! What happened? Why is this not posted in the archives yet? I made the file myself from github and it seems like its ready for release! What's the holdup?


Probably a lack of time, or to be able to release the program in a polished state rather than releasing a program that is unpolished or not ready for release.

epsilon5 wrote:
dunlavdy wrote:
Hey! What happened? Why is this not posted in the archives yet? I made the file myself from github and it seems like its ready for release! What's the holdup?


Probably a lack of time, or to be able to release the program in a polished state rather than releasing a program that is unpolished or not ready for release.

My apologies. I haven't really touched programming at all in over a year. I'll look into the project again when I get the chance.

After taking a look at it again, I realized I could probably get this published soon if I spend a few nights on it (ok, maybe a bit more than a few nights but you get the idea).

I've cut out the wooden background for the sake of speed and simplicity.
I removed the triangle behind the pomegranate.
I worked on adding combos just tonight, and that works pretty well.
I also worked on organizing the game progression a bit, but it still needs work. However I was able to make it so that more fruits are thrown at the same time as the game goes on (this allows you to get bigger combos).

I have not updated the repository, but I'll do that soon.
Also I streamed calculator programming asmr on my youtube tonight while working on it, lool. I might make that public if I can edit it down some. a bit cringe lo| but here ya go

The game still needs some work and polishing, but it does seem simpler to do now- not gonna try to complicate things too much like I was earlier.

So a few small updates,

obviously with the pandemic going on right now there should be more time for a lot of things, I'll try to make this one of them...

I increased the size of the combo text and I also added a bit of shaking to the screen for each time you slice the pomegranate. I am also working on making it so that a bomb never gets thrown in front of a fruit (forcing you to miss a slice).

Other things that I currently have on the to-do list:

I deleted the options menu since there was nothing I could think of that needs to be put on it. Im replacing it with the zen game mode option and am planning on removing the bombs for that, but if there is more to the zen game mode please let me know

thats all I could tell though. Besides that, nothing has been done recently, but I havent forgotten about the project.

Well considering the circumstances with TI, I guess there's no better time to try to finish this program. I've done a few things on the program the last 2 nights, which include these:

1. Zen mode was added
-includes 90 second timer (true to the actual game)
-No bombs, no pomegranates, and no penalty for missing fruits
-Still have to modify the gameplay a bit
2. Updated the pause menu
-You can now exit to the main menu from here

No gif, but I'll probably have one in the next post.