Wow those look fantastic! Are the random colors just outside the track just unmapped memory? Do you plan on adding texture there eventually?

TheLastMillennial wrote:
Wow those look fantastic! Are the random colors just outside the track just unmapped memory? Do you plan on adding texture there eventually?

Wtf have you never played the actual game. That's the track border.
↑
Quote

MateoConLechuga wrote:
TheLastMillennial wrote:
Wow those look fantastic! Are the random colors just outside the track just unmapped memory? Do you plan on adding texture there eventually?
Wtf have you never played the actual game. That's the track border.


I guess you just automatically think people are stupid just because they don't happen to literally be familiar with every single last video game ever produced in human history. :-/

To answer the question more politely, I think what you're talking about are the multicolored blocks outside the track regions. In the original game, they were blocks with that shape and texture like what appear in Super Mario Bros. 3 levels. The lower resolution in this screenshot might make it less clear what they are.

Back to the topic, congratulations on getting all the sprites implemented so quickly tr1p1ea, they look good.

Also, the speed is really good 50 FPS is great for any game on the CE in my opinion and to have that be those pseudo-3D graphics with 7 distinct karts on the screen is very impressive. Keep it up, Im really looking forward to seeing this project progress.

Been a couple of weeks however I have been working a little on the project - mainly getting the engine particulars sorted and stuff, so not a lot to show.

I have also been working on a VERY crude track editor to speed up track creation, mainly modding an older map editor I had made for PSK that I never finished: 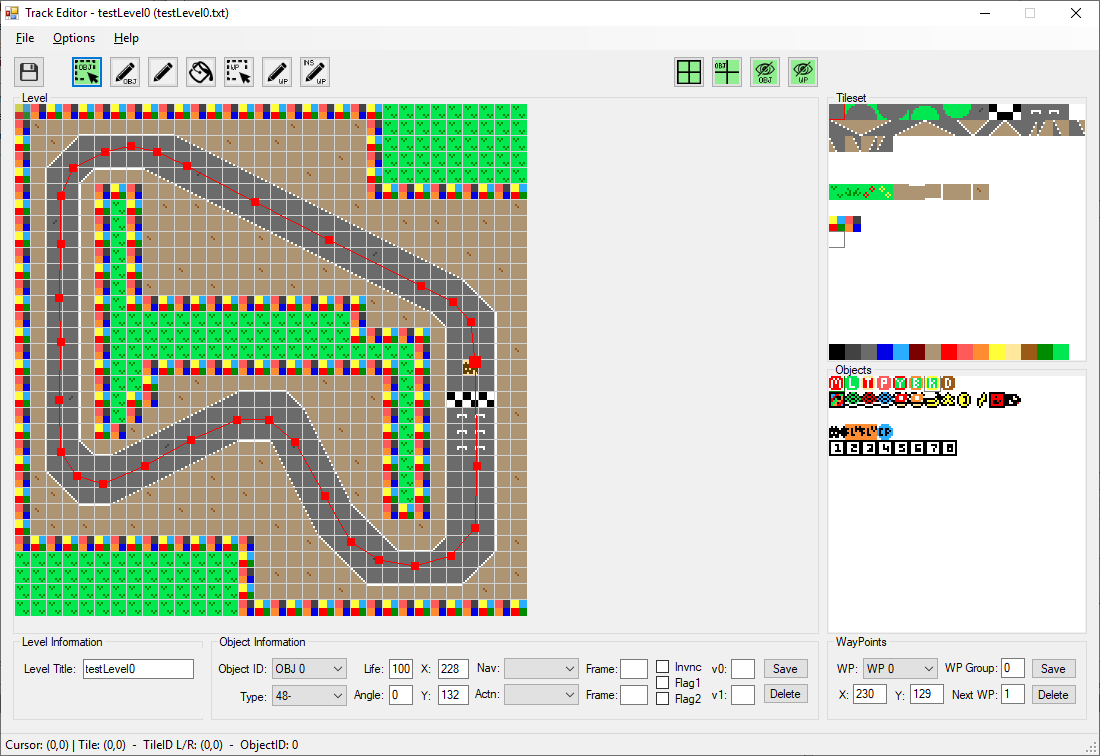 Can draw a map, place objects and waypoints for the AI. You can have multiple sets of waypoints for different AI to use, but this is just a test level.
"My world is Black & White. But if I blink fast enough, I see it in Grayscale."

Wow this is some awesome progress you've been making tr1p1ea, nice!
jvti.org
↑
Quote

I've been working on linking the output from the editor to the engine and now you can export some level data and it will load objects, positions etc.

Here is a screenie showing some of the enemies that you can encounter: 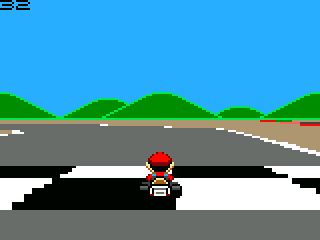 Note that I haven't properly implemented object culling so lots of stuff that is offscreen is getting updated, which leads to a big fps hit. I'll be working on this shortly.

EDIT - I added some rudimentary object culling and the framerate has improved somewhat: 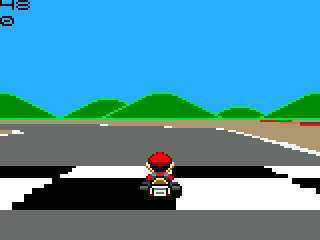 Nicely done, this looks very good (even better than MarioKart for the SNES, I think). The performance is impressive as well. Looking forward to more updates.

Thanks for the encouragement - It really helps stay motivated!

I have added some more object sprites: 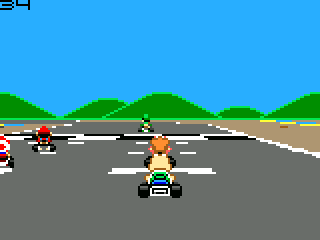 Nice, looks great as usual. I am really looking forward to seeing this turn into a full game, let me know if you need any help with UI or something and I would be happy to help (in C, probably).

Great work on the sprites and engine in general! The fact that this is possible - at all - on a calculator is incredible, and you're doing a great job making it run so smoothly. I can't wait for a playable demo!

Really neat! I imagine collisions might bring down the framerate a bit? Keep up the good work!

This is completely amazing, tr1p1ea. Keep up the good work!

Can't wait for a release!

How have I completely overlooked this thread? This is incredible! Keep up the good work!

Will you add in multiplayer at all?
"If it ain't broke, fix it until it is."
↑
Quote

Great detail on the added object sprites. Very smooth
Newbie for sure

Do you have any intention of adding any sort of post-processing anti-aliasing techniques? I know that you can't really afford to raise the resolution any higher, but with so few 3d pixels onscreen, you may be able to spend a few clock cycles cleaning those edges.

Thanks guys - regarding multiplayer it's something that I've thought about ... but want to get the game actually going first and then will see about it.

Regarding post-processing that might be a stretch whilst still maintaining performance. Though I do have some optimisations that I want to implement so you never know.
"My world is Black & White. But if I blink fast enough, I see it in Grayscale."

Suggestions :
In Mario Kart Super Circuit, which it seem to be styled after as well as the OG Super Mario Kart, when you drive over water there is a little splash effect. Could you add that for a little polish?

Also, when you drive into a bird on select tracks in MKSC, the bird flys away before you can get to it, so if you ever get to drawing bird sprites, maybe implement (for more polish)?

Айзек Мейер (Isaac Meyer)
izder456 at gmail dot com
↑
Quote
Register to Join the Conversation
Have your own thoughts to add to this or any other topic? Want to ask a question, offer a suggestion, share your own programs and projects, upload a file to the file archives, get help with calculator and computer programming, or simply chat with like-minded coders and tech and calculator enthusiasts via the site-wide AJAX SAX widget? Registration for a free Cemetech account only takes a minute.