I've been playing around with TI-Connect CE for Chrome OS, and I've noticed that it oddly refuses to send any assembly programs that are not official TI Apps.

Basic programs work fine (such as Mathtools shown in the video below) as well as the official periodic table app.

Anyone else having this issue or know what is going on?

I hate to break out the tin foil hat, but this doesn't surprise me. It might be a bug, but it might well not be.
↑
Quote

They finally released that? I have to check it out.
Scratch got updated. It's ok...
↑
Quote

This would be unsurprising. TI has a long history of trying to thwart the developer community.

From what was talked about on IRC, it appears protected programs as a whole aren't accepted, Basic ones included (which can be made from the desktop TI Connect CE), it's not actually related to ASM (they probably just match type 05 only, for 8xp...)

commandz sent an email to TI-Cares about it, we'll see

From what I've read through in the chat history, it looks like the current issue is getting TI Cares to understand the issue.

In other news (not sure if this has already been done), I realized that you can actually install the TI-Connect CE Chrome version on Windows if you load it into Chrome as an unpacked extension. This makes it much easier to view console messages/etc, but I haven't been able to get it to actually recognize that a calculator is plugged in yet.

EDIT: Just got off the phone with TI. They said that there are some limitations on the Chrome version of TI-Connect CE, and they are aware of the issue with it not being able to send protected files. They could not confirm whether or not this would be fixed in the future and said that this is really just a "concept app" at this point. 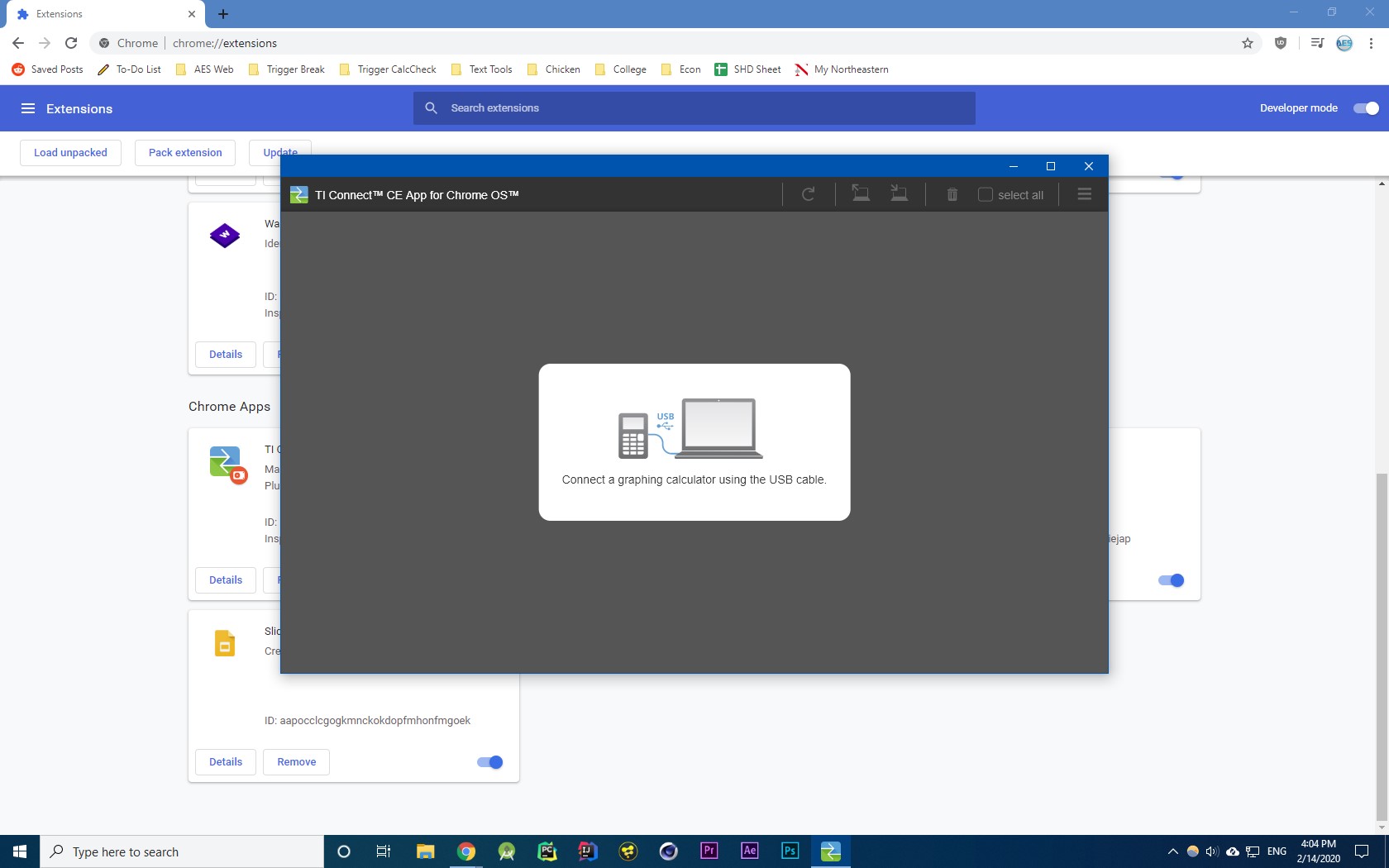 "concept app" lol, someone was paid hundreds of dollars to make that.
↑
Quote

You can also install it on Linux if you set your udev rules properly. If you can run TiLP as a regular user, you can probably run TI Connect for Chrome OS. Creating a file called /etc/udev/rules.d/65-ti-connect.rules with:


I don't know much about Windows but it probably needs a driver to do USB stuff.
My projects: Wordle | CEleste | Unit Tool | Tanks! | Terminal CE
Join MyCalcs today!
↑
Quote

Windows does indeed need drivers to communicate with USB devices in vendor-specific class, and can normally support a single driver for a given piece of hardware, which is the main reason why USB is so annoying for Windows users.
Member of the TI-Chess Team.
Co-maintainer of GCC4TI (GCC4TI online documentation), TIEmu and TILP.
Co-admin of TI-Planet.
↑
Quote
Register to Join the Conversation
Have your own thoughts to add to this or any other topic? Want to ask a question, offer a suggestion, share your own programs and projects, upload a file to the file archives, get help with calculator and computer programming, or simply chat with like-minded coders and tech and calculator enthusiasts via the site-wide AJAX SAX widget? Registration for a free Cemetech account only takes a minute.