You Are All Amazing
First, we want to say thanks for being amazing. Without all the visitors, the members that have joined, and those that have volunteered to run the community and contests over the last 15 years Cemetech wouldn't be where it is today. We've gone from an InvsionFree board to phpBB community on shared hosting, and eventually moving to a dedicated host. Without you, we wouldn't be where we are right now.

How does this help Cemetech grow?
Reddit is home to millions of users and even more visitors. By shifting our community over to Reddit we inherit all those potential members. As mentioned, Discord has been a great inspiration for this. We've had members join the Discord who lurk on the site, but didn't want to create an account. Since they had already signed up for Discord they were able to painlessly join the Cemetech Discord Server and get the help they require by tapping the communities incredible knowledge. Just imagine how many others will join our community now that we have an official presence on one of the largest social forums in the world. 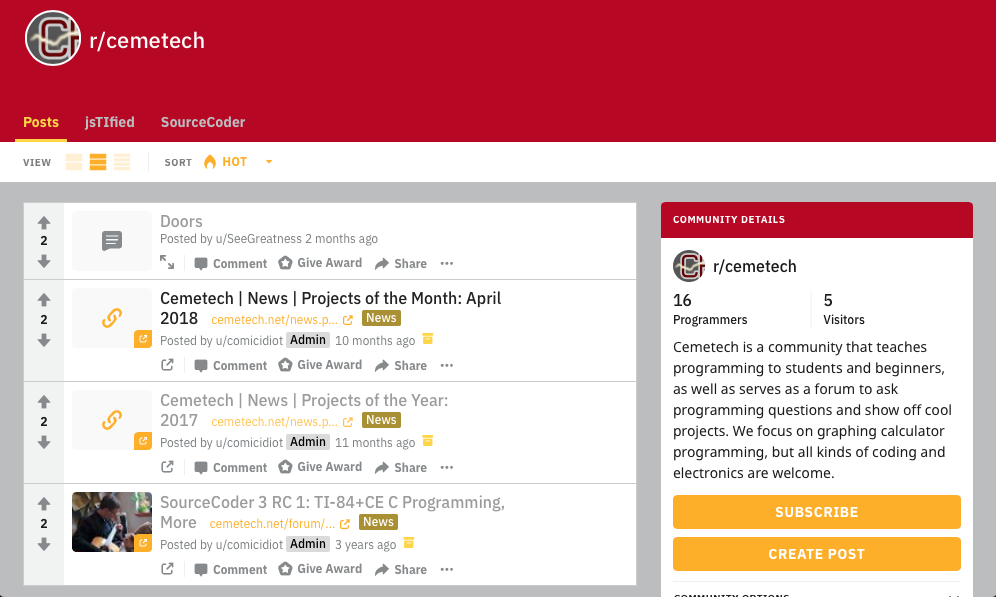 It'll be sad to see the forum go, but I love reddit a whole lot. this year was a bit more obvious than last year, imo

I completely support the reasoning behind your move. I can't wait to chat with you all over there!

So did our accounts get moved to reddit?
↑
Quote

Honestly this is better than whatever crappy code is currently running the backend.
↑
Quote

TimmyTurner62 wrote:
So did our accounts get moved to reddit?


You'll have to make an account over there, we don't have the ability to migrate accounts to Reddit.

Please note that our beloved Cemetech.net will switch to an archive of forum posts as well as the host for your favorite tools such as jsTIfied or SourceCoder 3.
↑
Quote

Bet you 400 lines of BASIC code that this is an April fool's day joke...

So it will be like United Ti all over again

Hooray, glad we could get some momentum to aid with the phasing-out of IRC that was discussed. The level of redundancy from "[#] [disjax]" still being there is grating on my nerves. (Objections from stragglers aside... I would've counted myself among them a year ago, but I've since moved on to a 64-bit OS. Hooray!)

It seems, from looking at the extensive member list on Discord, that a good number of us are already on-board with the changes, so I'm raring to go, and ready to try my quill in the new ink with which the future chapters of Cemetech will be written.

Weregoose wrote:
Hooray, glad we could get some momentum to aid with the phasing-out of IRC that was discussed.


We considered actually shuttering both IRC and Discord in favor of Reddit Chat but we didn't want to have that much change at once; so it'll likely be a 2020 or 2021 transition.

We're one step closer to cheating our way into having a mobile app.

It seems Alex didn't get the email memo

We will definitely be switching to another technology for chat. As mentioned in our post Cemetech: 2020 and Beyond, Google Wave will be what we will end up using in the future. Our server isn't ready yet and, due to fluctuations in server availability (as Google Wave has become very popular), we are waiting on setting up that server. We are all looking forward to the switch to this next-generation messaging technology.

And don't worry, the switch will be automatic

Awesome! Once this is fully operational I will no longer have to leave reddit, ever

Oh no... I dearly hope that this is an April Fool's joke. If this isnt, I really enjoy the forum format and it will be sad to see it go.

RogerWilco wrote:
Oh no... I dearly hope that this is an April Fool's joke. If this isnt, I really enjoy the forum format and it will be sad to see it go.

To be fair, Reddit is basically a forum itself, would you not agree?

Believe no "news" post that occurs on April 1st.

I don't HATE the idea in any way, I just 1) don't really want to start over on reddit 2) don't want to make a reddit account and 3) will really miss the old site.

Alex wrote:
SM84CE wrote:
Bet you 400 lines of BASIC code that this is an April fool's day joke...

The subreddit is most definitely real, as Alex said. Not sure why you are denying that