With the recent news that Crashplan were doing away with their inexpensive Home offering, I had reason to reconsider my choice of online backup backup provider. Since description of how I achieve satisfactory safety margins and some discussion of the options available seems to be of general interest, here's a version of my notes from the process. A more complete version (geared less toward discussion and more toward exposition) is also posted on my web site.

The canonical version of all of my data is stored on my home server, currently about 15 terabytes of raw disk (five individual disks) on btrfs RAID. This is backed up in two different places and has several other redundancies.


Between these, I'm protected from most plausible failure modes that could damage my data. For instance:
There are no shortage of services for storing data in "the cloud," though not all are suitable for my intended application of storing incremental backups. Though I've been using Crashplan for years now and been generally happy with the service, I did consider some alternatives when Crashplan announced that their "home" service would no longer be available:


These two are priced such that it's difficult to tell what you'd actually end up paying if trying to do incremental backups, because they charge for storage, operations (reads and writes) and data transfer out. While you could make them work for this kind of application, they're not really designed for it.

Each of these could be good choices. B2 in particular is supported by a wide variety of applications designed for making backups.

Services like Google Drive or Dropbox may be useful to some users, but they're not designed for this kind of use case so I did not seriously consider any of them.

Despite the cost increase, I've been happy enough sticking with Crashplan- it's still cheaper than any of the per-gigabyte services given the size of my backups.

I do have other computers other than my home server that I want to back up, but that's relatively easy. For my desktop machine at home, I mostly just mount the server as a networked disk and operate directly on things stored on it. While I've previously used Crashplan's peer-to-peer functionality for laptops that aren't always on my home network, I've started using Duplicati to back up to my server via SSH instead (which works fine in conjunction with dynamic DNS so my server is connectable externally). My other servers back up to the home one with Borg, in basically the same way that other machines are using Duplicati.

I'm going to copy paste this from my blog. Don't read my blog. Most things in my blog are rants, this being one of the somewhat longer ones.

Why can't you have everything? Here's all of the things a backup program needs:

At the end of the day, users just want their files safe and sound, so keep the software as close to the fundamentals as possible, and allow others to make tools around the backup software if additional functionality is needed.
Disclaimer: I am a robot.

This has definitely made me look at my own backup solution since this went live on your blog. I took some of your musing and settled with B2. Presently, my NAS is a bit dated and doesn't support any viable outside back up solutions except for S3 - It does support DropBox, Box, Google, and OneDrive but the plans for unlimited are either nonexistent or not economical.

My current back up solution consists of a 5TB HDD plugged in via USB to the NAS and manual backups to Amazon Cloud Drive Unlimited. They are removing the Unlimited plan when my subscription expires in January but I'm not too concerned, as mostly everything I have backed up are my photos. I left the Family Prime Plan for my own Prime in Summer so I can qualify for Unlimited Photo Storage but now I'm 150GB over the limit for files that aren't photos.

I can back up to BackBlaze B2 for like $16 a month, I think it was. I'll be upgrading my NAS this year and it will support remote backups to Amazon and B2. As well I'll also remove the USB HDD as the local backup. Instead I'll probably buy five new 2TB HDDs to replace the five that are presently in my current NAS and use it as the backup NAS. I'll remove the local back from the circuit/room that my existing hardware is in, so that if something were to happen the back up isn't directly connected to the source let alone on the same wiring. Both NAS & HDD are behind a UPS and I'll likely buy a new UPS as well to protect the backup even though it'll probably just power on once a week.

Costs probably won't go up too much each month. I don't have any huge foreseeable size increase, I may take on a friends photo library as a semi-local backup but it's not huge. When I upgrade my NAS I'll definitely upgrade the storage as well and may use it as a backup point for my laptop.

The only thing I wish B2 offered was the HDD restoration. I can pay $189 to restore my personal backups from an HDD that BackBlaze ships me but I see no such option for B2. Which blows because I have less than 4TB of photos and it would have worked perfectly; it's less than the data overages I'd pay on Comcast downloading the backup and it's more than likely faster than downloading the back up from the web. When I start the process I'll certainly have to throttle the upload until it's done.

Alex wrote:
The only thing I wish B2 offered was the HDD restoration. ...
The site alludes to something like that, but doesn't offer details:
Quote:
Data by Mail: Use our Fireball to mail us data; get it back with Snapshots by Mail.
They have an actual page for Fireball, but nothing about Snapshots by Mail (and Google doesn't find anything either). Might be worth contacting them about it.
タリ · · Ask questions the smart way · · ツイッター
↑
Quote 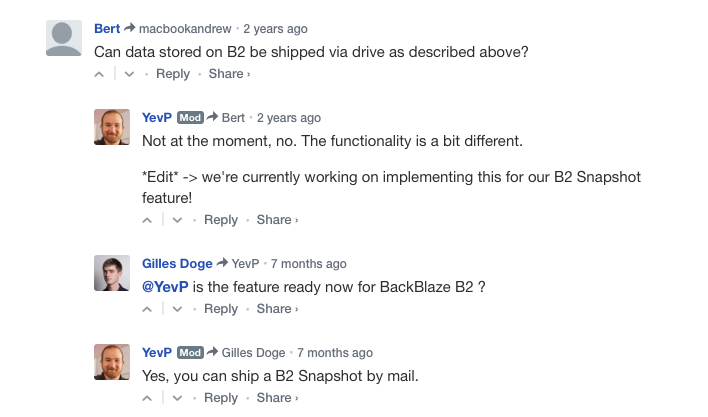 Ladies and gentlemen, where did we fall on this? What has been your experience with the backup solutions you've picked, Tari? I want to perform more rigorous off-site backups of my (Windows and Ubuntu) laptop and critical files.

I upgraded my NAS not too long ago and will be purchasing a B2 plan soon.

On a semi-related note, is anyone aware of any back up services that connect to cloud services like DropBox, GDrive, Creative Cloud, and more? It'd be awesome to properly backup those up to a service like BackBlaze.

I'm still pretty happy with Crashplan. It's hard to beat the value with the size of my backup archive, and performance remains satisfactory. Borg continues to work fine for pushing images between my own machines.


Quote:
On a semi-related note, is anyone aware of any back up services that connect to cloud services like DropBox, GDrive, Creative Cloud, and more? It'd be awesome to properly backup those up to a service like BackBlaze.
rclone supports a bunch of storage services and can synchronize between any two of them or your local machine, which may be sufficient for your needs. You won't get proper incrementals out of it, but you can mirror the latest image from remote storage to a local directory or another remote and do whatever you like with it at that point.
タリ · · Ask questions the smart way · · ツイッター
↑
Quote

Arq5 to B2 is clearly the best option. You noobs.

Arq5 is a storage agnostic backup tool that you pay for a single license and then can choose whatever storage provider you want. B2, Dropbox, Local Folders, whatever. It's pretty slick.
http://tcpa.calcg.org/
↑
Quote

Tari wrote:
rclone supports a bunch of storage services and can synchronize between any two of them or your local machine, which may be sufficient for your needs. You won't get proper incrementals out of it, but you can mirror the latest image from remote storage to a local directory or another remote and do whatever you like with it at that point.


Incremental would be nice but I can make do. It'd be more of a "Oh, I deleted that file" than a "Oh, I want an older version of this file." I save a lot of stuff to the cloud so I can access it between machines, usually making use of my NAS.

On that note, I remembered I can sync my NAS with DropBox and GDrive - as I already do on the old one I'm replacing - so I can just include those shares in my B2 backup. I'll get this sync set up on the new NAS soon.

Thanks for jogging my memory there.