Edit I have released a new version that address some graphical issues on the HUD and fixes the fact that it is impossible to exit the game. The reason it is fixed is because instead of using a fixed Save/load vram address which may only be correct on a certian firmware version it instead searches for it.
I have ported open Jazz jackrabbit to the casio prizm. Here are the controls


Here is the source code https://github.com/ComputerNerd/Open-Jazz-Jackrabbit-Casio-Prizm-port
And here is the binary.
https://github.com/ComputerNerd/Open-Jazz-Jackrabbit-Casio-Prizm-port/blob/master/openjazz.7z
The latest version is 1.04. I merged upstream's git repository with mine. This brought in lots of bug-fixes.

1.03 addressed an issue on real hardware where the screen would get corrupted. The reason it did was because I used a new DMA routine that is non-blocking. The file syscalls draw to the screen. This caused issues. The latest version still uses the new screen redraw technique but it waits for DMA completion before using file related syscalls.
To use the program place openjazz.g3a in the root directory then create a folder called jazz place openjazz.000 in that folder then download one of the many versions of jazz jackrabbit and place the resource files in that folder. You do not need the sound files and you do not need the "extra" files for example the cd version includes a demo of another game you don't need that you also don't need the *.exe file also there are some unneeded cutscene files that take up lots of memory those are not needed when in doubt use grep on the source code to see if the file is needed.
Edit Screenshots: 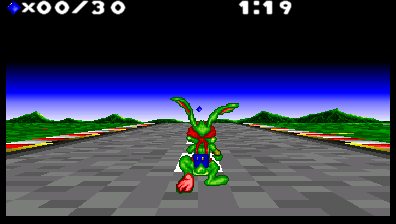 Great! Can you tell us more about the original game? I also recommend uploading to the Cemetech Archives and adding a few screenshots. You can use Casio's Prizm emulator to get screenshots.

Anyways this took longer than expected and as such I am up late I need to get some sleep. I am getting tired. Tomorrow I will update my post with pictures and more information but for now you can read https://en.wikipedia.org/wiki/Jazz_Jackrabbit_%281994_video_game%29 and http://www.alister.eu/jazz/oj/
I have noticed that the archive has some out of date files are you not able to update the files once uploaded or are the authors just lazy? I plan to do some updates soon.
EDIT: It works fine in the emulator I was wrong.
↑
Quote

Very cool--I'll have to try this out when I get home. I used to play jazz jackrabbit all the time, so it's cool to see it on the Prizm

Quote:
I have noticed that the archive has some out of date files are you not able to update the files once uploaded or are the authors just lazy?
Lazy authors.
Shaun
↑
Quote

Just brought it up on youtube, looks like a killer fun game, going to play it when I get a chance

oh man, i loved this game when i was younger. ill have to get out the older computer and play it, since i dont have a Casio Prizm.
Ephesians 1:7, What are you rich in?

hmm... I keep getting "An error has occured: Error loading fonts"

Never mind, I forgot to get the resource files

It loads the menu fine, but when I press "New Game", it says it can't find LEVEL0.*, even though I have all those files...

Any idea what's going on?

I got the files from classicdosgames.com, and I used v. 1.0.
Links to my calculator projects

ProgrammerNerd wrote:
I have noticed that the archive has some out of date files are you not able to update the files once uploaded or are the authors just lazy? I plan to do some updates soon.
EDIT: It works fine in the emulator I was wrong.
So where are those screenshots, then?

To answer your question about the Archives, you can update your files any time you wish. Out-of-date files are just the fault of the author not bothering to update, I am afraid.

it's a great and super classic game. thank you.
↑
Quote

it's fun, but I want to know how to exit the game?when I press EXIT it doesn't work, but when I press MENU the screen flashed. I have to turn off the machine.
↑
Quote

Alright I made a new release there are some slight changes but the main one is the fonts now show up
(This post was in reference to version 1.01)
↑
Quote

So where are those screenshots? I want to see how this looks; I'm considering another news post about the newest Prizm programs and games.

Sorry for the double post but I have released a new version. I edited my post to explain the changes. It is highly recommended that you upgrade as this version as the old version may write to ram locations used by the OS. This version should not have that issue.
↑
Quote

This is a really great port! I will try playing with it soon but am not sure if it will be used for much more then inpressing my friend. As the game (due to the low clockspeed) doesn't run smooth enough to be playable in all parts (say with many enemies). But that is not your fault!

Great port for a calculator, Looks great! 8/10!
Hi, I'm new... I like LUA, Java, PHP, GML and other programing languages. I hate french (the language not the people)!
↑
Quote

Glad you liked the game. You know that you can overclock your calculator to get a higher frame rate. It may be possible to optimize this a bit. I will just have to see. I am not aware of any cool tricks for drawing 8-bit palette data with a mask. I will have to look such up. Anyway if you are wondering Open Jazz Jackrabbit uses palettes and then after that is done using a LUT it is translated to rgb565 and drawn to the screen.
↑
Quote

New release. I merged the upstream git repository with mine. So this way any new bug fixes from upstream are just a merge away.

This brings lots of bugfixes to Open Jazz Jackrabbit

No more archives. Just use the download link from github.

I still want to use a more accurate timer but I have not done must work to achieve that. Maybe another time or maybe you (yes I really mean you!) can do it.
↑
Quote

Thanks for continuing work on this. Your previous version was very good. By the way, have you updated your OS yet?
Pokémon+/Lock Add-In: Prizm Password Protection
Message Add-In for Prizm/Language Add-In Template
G-PLUS & G-CLOCK: OS statusbar & G-SHOCK watch
↑
Quote
Register to Join the Conversation
Have your own thoughts to add to this or any other topic? Want to ask a question, offer a suggestion, share your own programs and projects, upload a file to the file archives, get help with calculator and computer programming, or simply chat with like-minded coders and tech and calculator enthusiasts via the site-wide AJAX SAX widget? Registration for a free Cemetech account only takes a minute.