KermMartian wrote:
Yeah, I don't think an extra second or two of loading time is a problem, especially for those nice-looking walls. The one caveat I must state is that for the sake of user-interface friendliness, any loading longer than about 1 second on a calculator should do something visual to show that the calculator is working, not frozen. Even something as simple as the hourglass in Doors CS during archiving / unarchiving is sufficient to prevent frustrated users, I think, although progress bars, perhaps with a level-specific bit of text, might be nice too.


Yeah, at the moment I have that rotating pixel effect, although if that doesn't seem to cut it, I'll change it to something more obvious. I definitely wouldn't want anyone getting that sinking feeling of thinking their calc has crashed

Oh, I totally missed that screenshot, sorry about that.

I think that that effect is perfect and should definitely be obvious enough.

Haha so I was just working on ammo management, primarily how much ammo you acquire when you pick up an ammo clip or make a purchase at an Intex terminal. I condensed a couple of routines for optimisation and bugged myself..

It looked a little amusing, so I just thought I'd post the after effects

Hahaha, that's great. Bugs like that are always fun

haha, gotta love when that happens.

Lol been there many times. At least you know where the problem lays.

I actually sort of like the effect of moving your ship off the menu to start the next level, but if you insist that it's a bug and an undesirable effect, I'll take your work for it.

Thanks for sharing that entertaining glitch.

I think in this case since it's not the start of the next level (and also not a ship), it is, indeed a bug. Though that would be a neat effect for the level starting--have a little intro that explains the level, and then you walk off of it into the actual level.
Shaun
↑
Quote

Haha yeah it's definitely a bug

It's all fixed now it was just a simple call / stack issue. Also yeah as merth mentioned, it's not meant to be a ship that you're controlling, it's a space marine

If anyone's interested, you can actually view a play through of the Amiga original of Alien Breed Special Edition '92 of which Alien Breed 5 is directly based on. It's available on YouTube here: http://www.youtube.com/watch?v=QDubd9-B5KI
Alien Breed (CE) | Banchor (CE) | Banchor II (in dev) | Spaze Invaders (CE) | Sqrxz (CE)
↑
Quote

Will you have the elevator animation?
Shaun
↑
Quote

merthsoft wrote:
Will you have the elevator animation?


Ooh that's a cool suggestion.. At the moment I don't, but I've just put it on my to-do list as a possibility, so I'll have a mess around with that

I think it would definitely add to the game. Also, it reminds me of Wolf3D, which is always a plus in my book.
Shaun
↑
Quote

Mmm definitely agreed, simple things like that can make a huge difference to the feel of a game. This has even given me a couple of other minor ideas too

JamesV wrote:
Oh man, Wolf3D, I spent a lot of time in high school playing that, even though I sucked at it!
While we're drifting off-topic, Doom (the original) was my FPS of choice in high school, played on many a fun afternoon in my high school's school newspaper office. Unreal Tournament (the non-2004 version) was my other favorite.

KermMartian wrote:
While we're drifting off-topic, Doom (the original) was my FPS of choice in high school, played on many a fun afternoon in my high school's school newspaper office. Unreal Tournament (the non-2004 version) was my other favorite.


In high school we used to play a lot of Quake just on the local network during class. I don't know how we got away with it though haha

On the topic of AB5, I eventually became frustrated with the on-calc level editor, mainly as I had such a restricted view of the level. So, I dusted off the corner of my brain that had what limited C# knowledge I have, and coded up a Windows level editor.

I think I'll find it much easier placing enemies & item pickups now that I can see the full level at once. I also included a neat little feature that allows me to view the level both in "edit" mode and also "game view" mode, ie. walls are basic and enemy triggers, etc. are visible in the former, and in the latter walls are calculated out properly and triggers aren't visible.

Here are a couple of images, showing level 1 in both "edit" & "game view" mode

You can see in the second image that the "E1" (enemy trigger) tiles aren't visible, and the walls are generated as they are in-game. 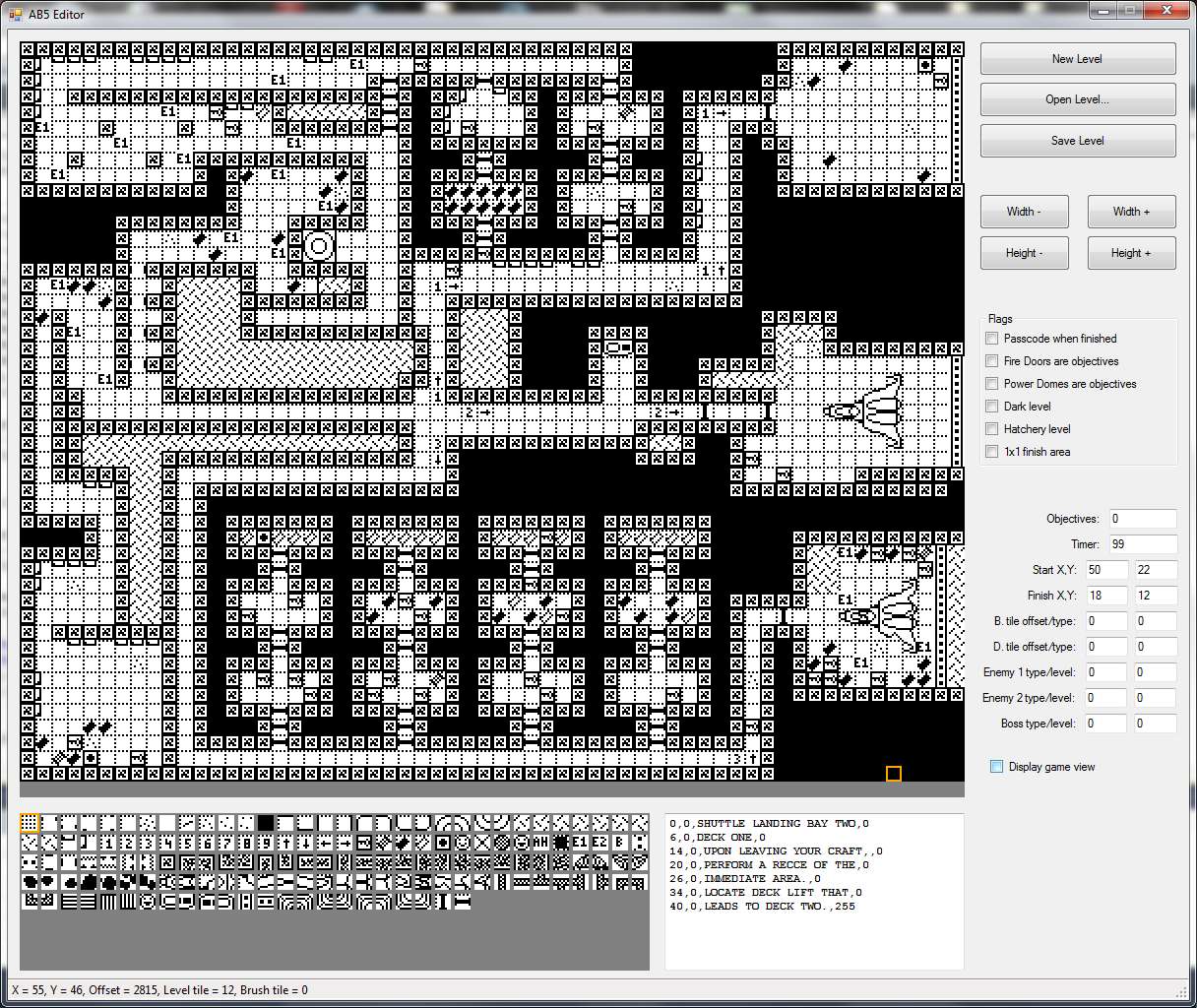 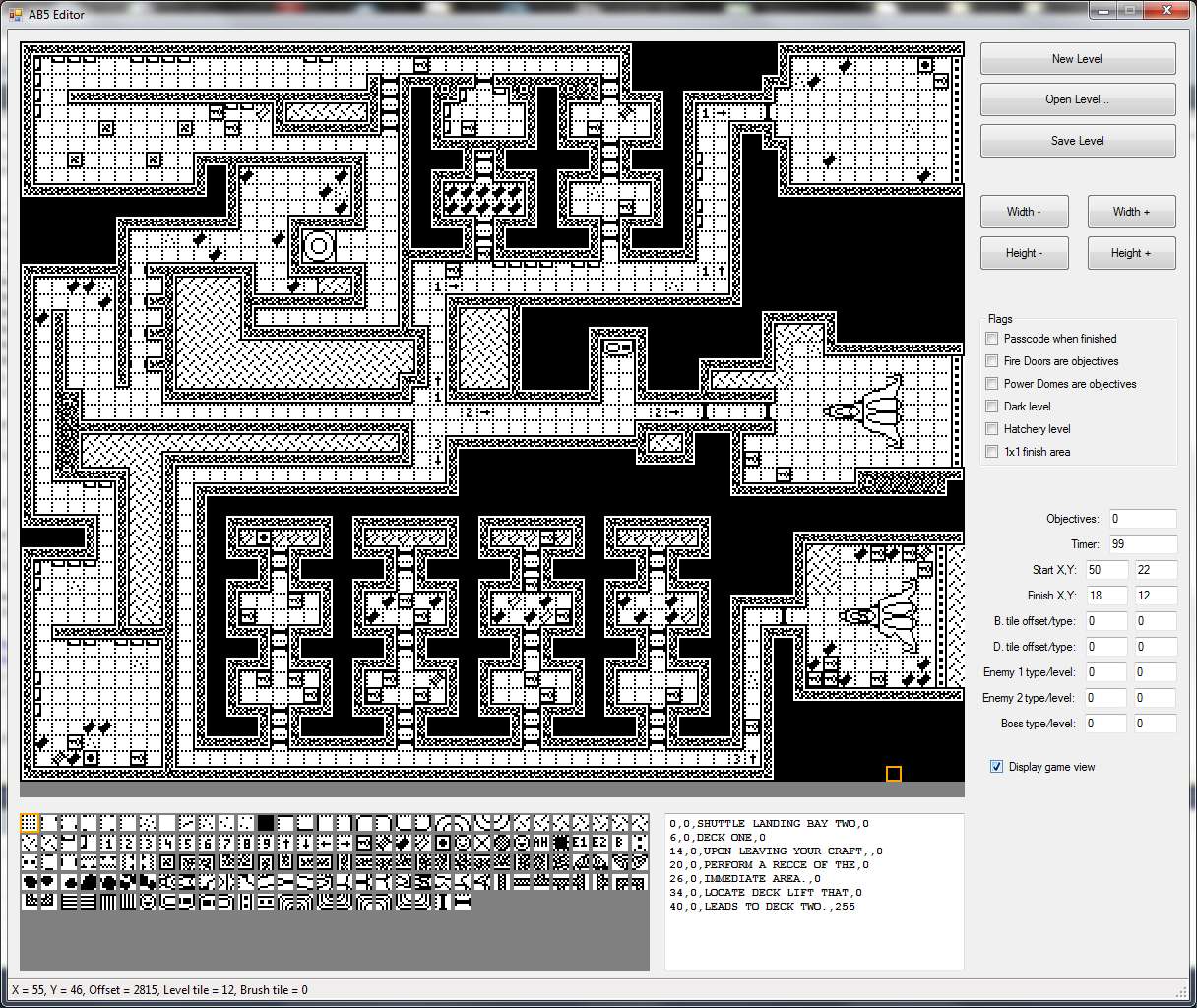 Very exciting, definitely looking forward to playing this more than ever before

I seriously hope you are planning on distributing that tool with the game! Did you write a .8xp/v exporter that fast, or does it output binary that you embed?

After you telling us it's supposed to be a space marine, I can kinda tell. It would be more clear if you animated it a little, however

Ooh, I love seeing stuff like this, the creation process. I'm a little sad I didn't get to assist

merthsoft wrote:
Ooh, I love seeing stuff like this, the creation process. I'm a little sad I didn't get to assist

Yeah thanks for the offer merth, but when I did crack and decide to do a Windows based editor, I already had in my mind what I wanted it to look like, and also I've been thinking about having a go at C# again for a while so this was a good excuse

KermMartian wrote:
I seriously hope you are planning on distributing that tool with the game! Did you write a .8xp/v exporter that fast, or does it output binary that you embed?

I will be releasing all source and data for the game, although probably separately to the actual game. This will include all the Z80 code for the game itself, this level editing tool (including the Visual Studio 2010 C# code for it), and all the level data files. Hopefully someone will find it useful if they're trying to learn programming

I've documented quite a lot of the Z80 code with comments so fingers crossed it makes sense!
Alien Breed (CE) | Banchor (CE) | Banchor II (in dev) | Spaze Invaders (CE) | Sqrxz (CE)
↑
Quote
Register to Join the Conversation
Have your own thoughts to add to this or any other topic? Want to ask a question, offer a suggestion, share your own programs and projects, upload a file to the file archives, get help with calculator and computer programming, or simply chat with like-minded coders and tech and calculator enthusiasts via the site-wide AJAX SAX widget? Registration for a free Cemetech account only takes a minute.