A Text-based Version of ACNH for the TI-84 Plus CE Graphing Calculator, written in TI-BASIC.
This game is based off of a Replit.com game by @SilverMoonCat. (Link in Readme)
Beta Testers (Before this was a public beta):
Oxiti8
RoccoLox Programs 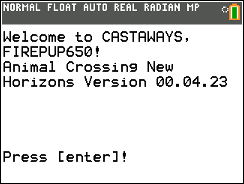 The title says ACNHBASI, but this is actually more like a text based fishing game with an animal crossing skin, as it's the only finished portion of the game.

You select where you want to fish, and you fish. the type of fish varies depending on where you are fishing, with both the ocean and river having their own random pools of fish. Most of the time you successfully catch a fish, others you don't. it's completely random.

I think that the fishing aspect of this game definetly could do with some improvements in complexity- say you start with a rod that has a so-so catch rate, but you can save up bells to buy a silver and eventually golden rods that have better catch rates (As a substitute for the upgraded rods in Animal Crossing games that increase the window in which you can catch a fish after it bites)

I can't really judge the rest of the game as there's nothing there to judge.