BASIC INVADERS
There is a newer version of this file available; you may go to the newest version, or view all versions below.

Aliens are trying to invade Earth yet again! Use the PALC (Piercing Atmospheric Laser Cannon) to eliminate them! More info in the "readme". 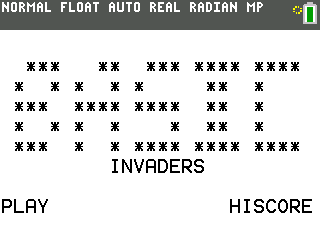 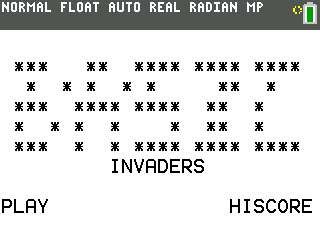 This is a basic version of space invaders. However, it's not a very fun one. The game is slow, the graphics are unremarkable, and worst of all, the bullet collision with the aliens is inconsistent. Often times you'll find an alien moving right onto your bullet but not taking any damage from it. This combined with the fact that you can only shoot one bullet on screen at a time makes the game hard and frustrating. Maybe this is part of those "budget cuts" the game's readme was talking about.

On top of all that, the game's locked from editing. Really?"

At least the game lets you save your progress which is nice.

6/10 - THE ALIENZ PUNCHED ME IN THE FACE, AND NOW THEY RUN OFF WITH MY MONEY! HELP ALIEN STOP COME BACK THAT'S MY MONEY