Play the classic game snake! Grow and eat food in the game Snake, a fun archaic game. All within the lovely bounds of TI-Basic (for maximum homey feels) Have fun! 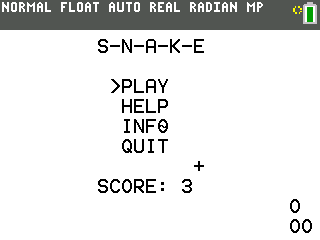 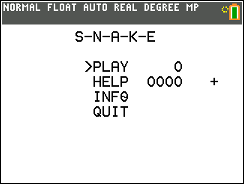 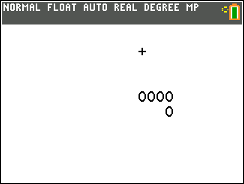 This is a simple homescreen TI-BASIC snake game. Eat the +, avoid your tail.
The menu having a snake moving around while you select an option is a nice touch graphically.

Code-wise, the game seems a bit overly complex for what it is and falls into a few common pitfalls, such as Goto memory leaks, and using parenthesis for multiple conditions in if statements rather than "and" which would save quite a few bytes.

Something that could improve the replay value is to include a high score system in the game.

There are snake games with better graphics out there in TI-BASIC, but you could do a lot worse than this. - 7.6/10.