You may know Geometry Dash (which is an adaptation of The Impossible Game). It's a game which consists in jumping above dangerous blocks, to keep it short.

You can know create your own level by using a software called "Tiled" and by importing it there : http://illusio.pe.hu/GeometryDash/index.php
The explanations are in french though (Google Translate is your friend :P)

I'm sorry there's no topic for Geometry Dash on cemetech for now. For more information, take a look there : https://tiplanet.org/forum/viewtopic.php?f=12&t=19211 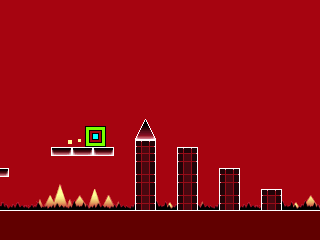 Great game very nice got it for all my friends they all wish there were more levels and a rocket ship so hopefully one day you could do this thanks.

Well the game is good, but it was made too late.

**CONS:
*The only bug I've encountered with this program is when falling onto thin blocks, sometimes the program will think you went though it, and therefor makes you die. It's not too common, but happens enough to be pretty annoying.
*The biggest con is the lack of community, and therefor levels. Geometry dash had its big hype 3 years before this program was released so nobody ever had the motivation to create any other levels and release them. Therefor once you beat the two included levels, there's not much else you can do.

**CONCLUSION: I do believe this is a great game, you'll enjoy your time playing it, it just has limited levels. [9/10]