ADVENTUR - A Game About Choice

ADVENTUR is a game originally created in TI-BASIC for the 84+ C Silver Edition.
It was then rewritten in AutoHotkey and expanded to have more than five times the original content.
Once I got a TI 84+ CE, I ported the original basic code to my new calculator.
And now, I bring to you ADVENTUR Update 4 Preview written in Assembly for the TI 84+ CE!

This game was inspired partially by the Stanley Parable. Like the Stanley Parable, it is a game
about choice. If you play this game with the sole intention of beating it, you are missing out. Just
play through the game and appreciate all the content. Play it multiple times. Have fun. &#12484;

DISCLAIMER: I am not responsible if this game causes you to go insane. It contains several logical
fallacies and fanciful circumstances. Do not take this game too seriously. This game is also not very extensively tested. 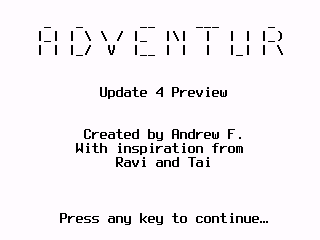 Michael2_3B says: at 2016-03-29 00:22 UTC
Clever writing! Many interesting plots along the way and keeps your interest for a while. Also, I kind of got some Dark Matter (netflix tv show) vibes from some of the plot, not sure if that was intentional or just coincidental :P
KingInfinity says: at 2016-02-04 23:43 UTC
Clever writing and a fast-paced wacky meta storyline reminiscent of an episode of Community on NBC.